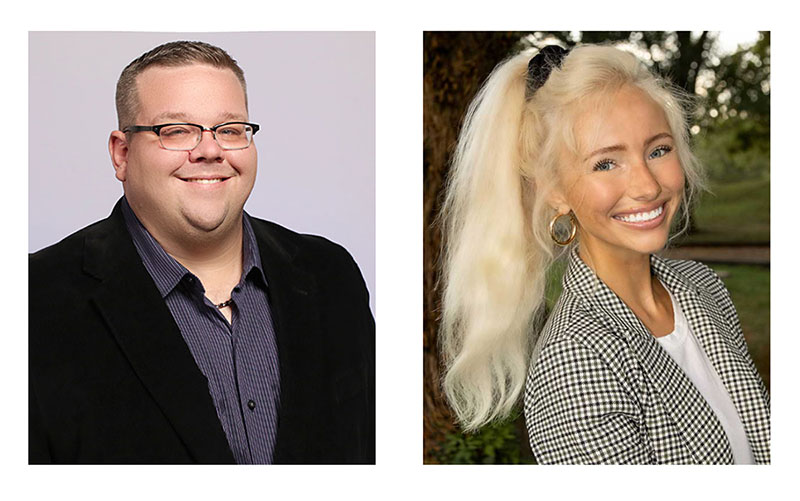 NASHVILLE, Tenn. – 2911 Media pulls through the trials of the times to promote valued employees Scott Sexton and Logan DeLoye. Sexton has been promoted from the title of Publicity Manager to Director of Publicity and DeLoye from Media Coordinator to Publicity Manager. Doing their very best to continue to keep the dream alive for a very outstanding and diverse client roster, and guided by company President/CEO Jeremy Westby, the team proved their worth through hard work and continued success during the unprecedented events of 2020. 2911 Media continues to shoot for the stars to bring their artists the very best opportunities.

“Being Director of Publicity at 2911 Media is a role that I am honored to obtain and have dreamt about for a long time. Helping an artist be the very best they can be, at all levels, has always been my number one goal and it always will be. Seeing their dreams through makes mine possible and I couldn’t be more excited to embrace this new role with 2911 Media,” shares Sexton.

Fueled by his love for country classics at the early age of 19, Scott began freelance writing for a country music blog and info site titled CountryMusic.About.com. He conducted interviews with such artists as Trisha Yearwood, Marty Stuart, Chuck Wicks, Jo Dee Messina, Steve Wariner, along with many others. Not long after, Sexton became a sought-after freelancer and started writing for other outlets including CountryMusicReport.com and CountryStarsCentral.com. With great love for history and the legends of country music, Scott worked with Grand Ole Opry star Jack Greene – lasting 7 years until his passing in 2013. In June 2013, he created ‘Country For A Cause,’ which continues to raise money for Monroe Carell Jr. Children’s Hospital at Vanderbilt each year.

“I am very happy to be promoted to Publicity Manager at 2911 Media!” shares DeLoye. “I started working with 2911 Media last year during the Country Radio Seminar, right before the first COVID-19 lockdown, and have learned a lot of valuable information from Scott and Jeremy, despite the year’s challenges. We have some of the most talented clients in the music industry on our roster and I am blessed to continue to grow with them and the rest of the 2911 team.”

Logan graduated from Middle Tennessee State University in December 2019 and holds a bachelor’s degree in Journalism and Communications. She has written artist biographies, freelance articles, and press releases for musicians and venues across the globe, handled various social accounts for Nashville media outlets, and has filmed, edited, and starred in broadcast news stories throughout Tennessee. DeLoye is also proficient in content writing for websites and intern training. When Logan is not working, she volunteers with local nonprofits such as the Leukemia and Lymphoma Society of Nashville, Harpeth River Conservatory, and the Safe Haven Family Shelter.

“I’m incredibly proud of the talent we have here,” shares Westby. “Scott and Logan really deliver for our clients. There isn’t anything I can’t trust them with to handle capably and thoroughly. They both bring eager anticipation to the tasks at hand every day, with unlimited smiles and laughter to carry us and our clients through the week. I’m overjoyed that we could look this past year in the eyes and give it a good wink and nod. We are grateful to everyone who’s allowed us to represent them and their brands, and are anticipating another fantastic year – which is already well underway! We also just celebrated (virtually!) Logan’s one-year anniversary with the company. Cheers to all – and thanks to all for trusting and believing in 2911.”

About 2911 Media:
Founded in November of 2017, 2911 Media provides publicity, marketing, media strategy, and branding services to actors, artists, athletes, authors, and more! The 2911 team has a rich history in entertainment publicity, marketing, management, and live event production. Their collective experience includes fairs, festivals, and major national and international tours to film and television junkets, and video and live stream production, including national and international satellite and radio tours for major stars. Their current clientele includes GRAMMY, ACM, CMA, GMA, and IBMA award winners, as well as Opry, Country Music Hall of Fame, and Rock and Roll Hall of Fame members. 2911 Media is a proud 4-time recipient of ‘Best PR Firms in Nashville’ from Expertise.com as well as a recipient of the New Music Weekly award in 2020, with voting memberships in ACM, CMA, and more. Discover their client roster, sign up to the primary email list or request an interview at www.2911.us or follow on LinkedIn, Instagram, Facebook, or Twitter.