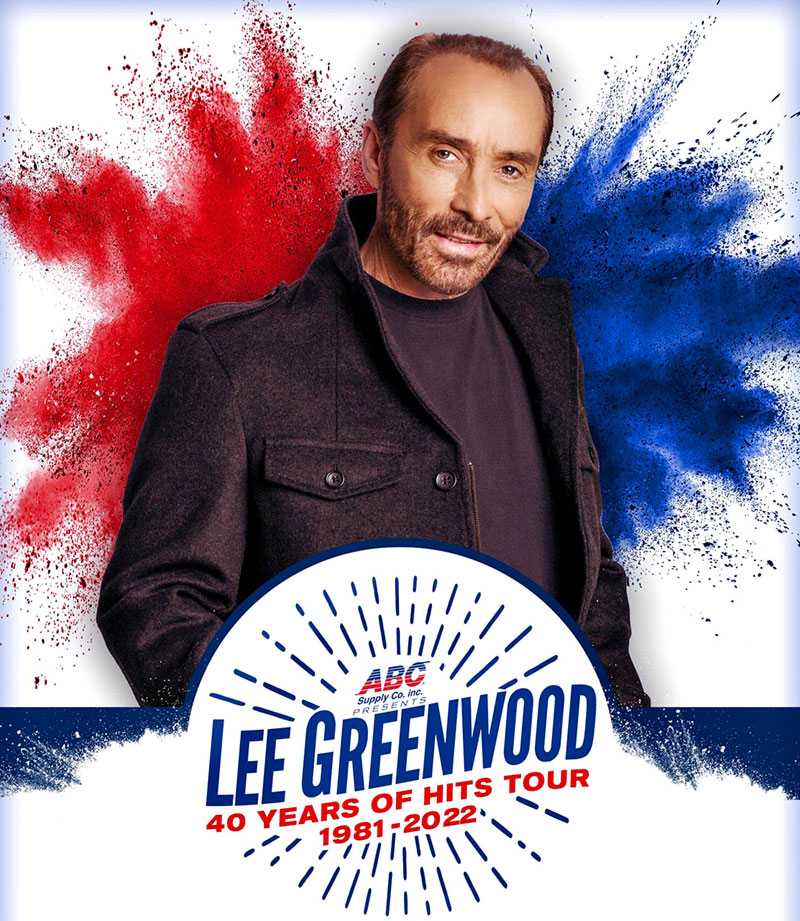 Tour announced by Taste of Country and The Boot

NASHVILLE, Tenn. – Country music legend Lee Greenwood is sprinting towards the finish line of 2021, to put a wrap on what has shaped up as one of the highest-profile years of his career. Ahead in 2022 will be the January launch of his ‘40 Years of Hits Tour,’ which will find the multi-awarded country icon crisscrossing America to hit 40-plus concert dates already confirmed for the year, with more being added. The tour is being sponsored by ABC Supply Company, Inc. Read today’s announcement at Taste of Country and The Boot.

“This announcement is only the beginning of what is shaping up to be a record year for us,” says Greenwood. “I have not done such a major tour in many years, normally it is one or two in a row and back home. This tour is going to have me performing at places from small to large, fair to festival, and everything in between.”

This year marked Greenwood’s official ’40 Years of Hits’ celebration, recognizing his amazing presence as an artist, musician, songwriter, philanthropist, and consummate entertainer since his emergence on the national charts in the ’80s. With over twenty Top 10 singles, garnering Grammy, CMA, and ACM awards, his stellar rise to unprecedented national attention in the wake of “God Bless the USA,” has given Lee Greenwood a permanent place of prominence amid the true legends of American music, crossing both decades and multiple genres.

Fresh on his list of highlights in 2021, was last month’s ‘All-Star Salute to Lee Greenwood,’ which featured a “who’s who” of top name artists in a celebration that produced not only a star-studded stage but also the third highest-grossing event in the 46-year history of Huntsville’s Von Braun Center. The concert was promoted by Outback Presents. The concert footage is set to produce a trio of television specials to air in the 2022 season.

Dates already announced for the 2022 ’40 Years of Hits Tour,’ encompass both private and ticketed events and include:

Follow Lee Greenwood on all social media platforms as well as his website for updates to his tour schedule and get notified when tickets go on sale.

About Lee Greenwood:
Throughout his expansive career, international country music icon Lee Greenwood has earned multiple CMA and ACM Awards, a Grammy Award for Top Male Vocal Performance on “I.O.U,” in 1985, and a multitude of other prestigious awards nominations. His discography includes twenty-two studio albums, seven compilation albums, seven No. 1 hits, and thirty-eight singles including songs like “It Turns Me Inside Out,” “Ring On Her Finger Time on Her Hands,” “She’s Lyin’,” “I Don’t Mind the Thorns if You’re the Rose,” “Dixie Road,” “Somebody’s Gonna Love You,” “Going Going Gone,” “You Got A Good Love Comin’,” among others. His stand-out hit “God Bless the U.S.A.” has been in the top five on the country singles charts three times (1991, 2001, and 2003), giving it the distinction of being the only song in any genre of music to achieve that feat. It reached the Top 20 of the Billboard Hot 100 chart shortly after 9/11. Known for his stand-out patriotism and support of the U.S. military, Greenwood has been honored with the Congressional Medal of Honor Society’s National Patriot’s Award and entertained troops on more than 30 USO Tours.