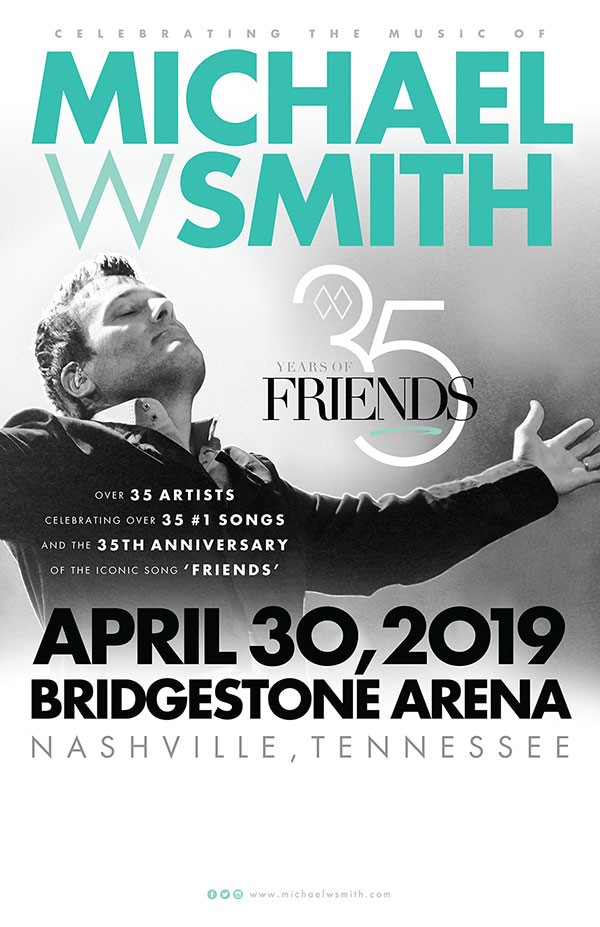 Nashville, Tenn. – With over 45 Dove awards, three Grammy awards, and an American Music award, Michael W. Smith has forever enshrined his mark in the music history books. Smith garnered yet another Grammy nod last Friday with a nomination for ‘Best Contemporary Christian Music Album’ for his latest worship effort, ‘Surrounded.’

Dubbed ‘35 Years of Friends: Celebrating The Music of Michael W. Smith,’ music lovers will experience over 35 artists, from all genres, performing a set list to include many of Smith’s 35 #1 hit singles. In addition, 2018 marks the 35th Anniversary of Smith’s Top 10 single “Friends,” which helped introduce his music to both secular and non-secular audiences. Smith once again shared the song with the world when he performed it at the Washington, D.C. memorial service for his dear friend, President George H.W. Bush, last Wednesday.

“Michael is a Christian music icon and we can think of no better way to celebrate him than with this star-studded lineup we have put together,” says Outback Concerts’ Morgan Carney. “It’s going to be an event not to be missed, and will be a fantastic celebration of one of the greats.”

“I’ve had the privilege of working with Michael for over thirty years,” said John Huie, Head of Music at CAA in Nashville. “I’ve seen his music impact people from all walks of life – from Presidents to pedestrians. This celebration of his contributions to music and the impact of the song ‘FRIENDS’ will be very special. It’s been fun watching it come together as so many artists from all genres are anxious to celebrate Michael and his music. An event like this is a first for a Christian artist – and it’s going to be great!”

“Putting a tribute event together can be a tremendous amount of work, unless you are doing a tribute to Christian superstar Michael W. Smith,” said Tony Conway (Conway Entertainment Group/Ontourage). “I have been a fan and follower of his music and mission in life since he started performing. Every single artist that his manager Chaz and I talked with said yes right away. It is an honor to work alongside Michael, Chaz and the promoter, Mike Smardak of Outback Concerts. One thing we can all promise, and that is this will be a very special, one night only concert, with lots of surprises and magical collaborations.”

Tickets go on sale at 10 am (CT) Friday, December 14 at all Ticketmaster locations and the Bridgestone Arena.

About Michael W. Smith:
Michael W. Smith has been releasing new music regularly and performing around the world to sold-out crowds for the last 30+ years. During his storied career, he’s written over 30 #1 songs, been honored with three GRAMMY® Awards and 45 Dove Awards, one American Music Award, was inducted into the Gospel Music Hall of Fame and has sold more than 15 million albums. His most recent USA Today, Yahoo! Music and Billboard-acclaimed studio album A Million Lights and Parade, Good Morning America-featured and GRAMMY nominated live worship album Surrounded have together become his 30th and 31st Top 10 hits on Billboard‘s Top Christian Albums chart, more than any other solo artist in history. He’s also given back to the global community. Smith has raised funds to battle AIDS in Africa; started Rocketown, a safe haven for young people in Tennessee to meet and find hope; and has helped more than 70,000 children through Compassion International. He has also written several bestselling books, including Old Enough To Know and Friends Are Friends Forever. For more information, visit www.michaelwsmith.com.