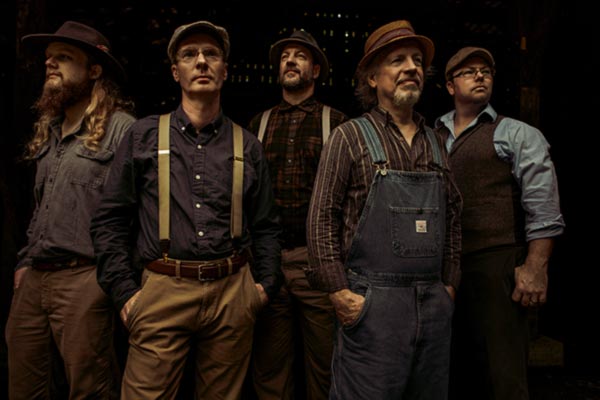 Appalachian Road Show is a visionary acoustic ensemble, comprised of GRAMMY and IBMA award winners and nominees, bringing new-generation interpretations of traditional Americana, bluegrass, and folk songs, as well as offering innovative original music, all presented with a common thread tied directly to the heart of the Appalachian regions of the United States.

GRAMMY-nominated banjoist Barry Abernathy joins forces with GRAMMY-winning fiddler Jim VanCleve, fresh off of his recent stint touring with multi-platinum country artist Josh Turner, as well as esteemed vocalist and mandolinist Darrell Webb, who has recorded and toured with Dolly Parton and Rhonda Vincent, among many others. The group also includes bassist Todd Phillips, an acknowledged legend in bluegrass music circles, with two GRAMMY wins and four GRAMMY nominations under his belt, along with 23-year-old “old soul” guitarist Zeb Snyder, whose fierce and versatile playing recalls Doc Watson and Norman Blake as readily as it does Duane Allman and Stevie Ray Vaughn.

“With this group, we want to shine a light on the music and the culture of the Appalachian region we come from,” says Abernathy.

“I feel we’re tapping into something much larger, something both ancient and current, primal and present,” says VanCleve.

“With the Appalachian Road Show, we have completely immersed ourselves in our native culture and delved even deeper into our own musical roots. We are striving to present audiences with more than just some great music, we intend to take them on a cultural “journey” of sorts and deliver more of a three-dimensional experience”, says VanCleve.

Ready to share its authentic and fresh approach with the public, the band went into the studio in the summer of 2018 and recorded its debut album, Appalachian Road Show. The project landed three multi-week number one songs on Bluegrass Today Weekly Airplay charts and garnered the band a New Artist of the Year nomination and Song of the Year nomination (“Dance Dance Dance”) at the 2019 International Bluegrass Music Association (IBMA) Awards.

Following on the heels of their successful debut, the group released their sophomore effort, Tribulation in Spring of 2020, just as COVID-19 pandemic was taking hold of the world. Despite not being able to tour, the project was an instant hit and garnered lofty praise. WPLN, Nashville Public Radio dubbed it a “masterpiece”, while NPR’s All Things Considered welcomed the band on to discuss the cultural roots of the music, as well as the album’s poignant and accidentally prescient title. Tribulation landed two more multi-week number one songs on Bluegrass Today, Bluegrass Gospel, and Bluegrass Unlimited’s airplay charts, and garnered the band a nomination for Album of the Year, Instrumental Recording of the Year (Appalachian Road Show), as well as New Artist of the Year at IBMA.

Appalachian Road Show invites us to come and sit a spell on its porch as the band shares its dynamic musicianship through songs and stories emanating from the mountains and hollers of North Carolina and Virginia to the coal mines of West Virginia and Kentucky. The band delivers powerful performances that range from the gospel-esque “I Am Just a Pilgrim” and “Little Black Train,” to the reeling, kick-up-your-heels “Dance, Dance, Dance,” to the ballads of love and loss “Anna Lee.”

“These songs come from the Appalachians and from the coal mining and the logging camps of those ancient mountains,” says Abernathy. “There’s something universal in the music and its expressed themes.”

Abernathy, VanCleve, and Webb know it well as they were each born and raised in Appalachia.

“I was 10 or 11 when I started singing in church,” says Abernathy, who grew up near the head of the Appalachian Trail in northern Georgia. His grandmother had a banjo, and despite being born with only one finger on his noting hand (it’s quite remarkable to see him perform), he knew at the young age of 14 that he wanted to learn to play that banjo and Appalachian music.

Abernathy and his family were recently featured on TODAY, Good Morning America, The 700 Club, Parents Magazine, Huckabee, and more after adopting two foster children, one of whom shares the same ‘disability’ as his own.

“I am 50 years old, and my wife and I had never even thought about fostering or adopting. However, when these children came into our lives, we both felt God’s calling to try and take them into our family. Tyler has a left hand exactly like mine. I’ve never seen anyone else’s exactly like mine,” said Abernathy.

VanCleve, a North Carolinian by way of Florida, was gifted his first fiddle when he was six. His grandfather, a preacher, played acoustic music, as did his aunt, uncle, and father. By the age of twelve, VanCleve and his father were traveling all over the mountains of North Carolina and Southwestern Virginia, attending dozens of fiddle contests, bluegrass festivals, and old-time music festivals.

Webb grew up in the coal-mining country of West Virginia where he mastered old-time and bluegrass music through the influence of his father, a coal miner and bluegrass musician who passed away from the dreaded black lung – a highly emotional topic which Appalachian Road Show tackles in its musical performances.

“Appalachian music and its stories have been passed down to us, and we’re now passing our own interpretations to a new generation, while also shedding a reverent light on this culture,” says Abernathy. “We want to not only keep these traditions alive but also honor the strong and dedicated individuals who made lives in the mountains over the past 200 years. Appalachian Road Show is meant to be more of a cultural experience rather than simply just a collection of songs. If we were to eventually be viewed as unofficial ambassadors of Appalachian culture, that would be an honor.”

With a full schedule of tour dates lined up and new music already in the works, Appalachian Road Show has big plans for the future. Abernathy, VanCleve, and Webb intend for Appalachian Road Show to become much more than just a concert, but to eventually grow into a full-on production and immersive experience, offering interpretations of culturally appropriate tunes, telling the stories behind the songs, offering visuals that support the emotional content of the songs, as well as offering new original songs which are born out of the emotion and spirit of traditional Appalachian music.

For now, Appalachian Road Show invites us into the music and stories of Appalachia’s culturally rich heritage. As they say, “It’s part of who we are. It’s natural for us. It is authentic. This music is so vibrant, and it has its own vitality and its own life, and we mean to carry that forward.”

For tickets to The Franklin Theatre performance Sunday, July 25th at 6 pm, visit franklintheatre.com or call 615-538-2076.