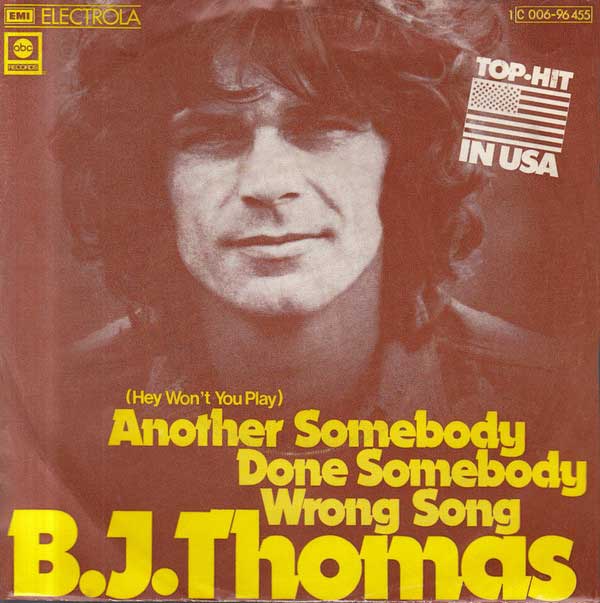 NASHVILLE, Tenn. – Four-time Grammy award winner and Grammy Hall of Fame inductee, B.J. Thomas is celebrating the 45th anniversary of his classic number one hit “(Hey Won’t You Play) Another Somebody Done Somebody Wrong Song.” Written by Larry Butler and Chips Moman, B.J. Thomas reached the top of the Billboard charts in 1975 and was ranked the Number 17 top song for 1975, winning a Grammy Award for Best Country Song in 1976. The single, just as relevant and catchy in the 1970s as it is today, invites listeners into a world where love leaves one lonely and the only thing that heals is the sweet simple melodies of a song.

“(Hey Won’t You Play) Another Somebody Done Somebody Wrong Song,” was the last song we recorded for the “Reunion” album and I am so glad it was included,” said Thomas. “It was produced by Chips Moman and the Memphis Boys and is the longest title to top the Hot 100 charts. Thanks for the #1!”

Originally entering the Billboard Hot 100 in 1975, “(Hey Won’t You Play) Another Somebody Done Somebody Wrong Song,” ended up becoming B.J. Thomas’ second #1 hit. After reaching the top of Billboard’s Easy Listening chart, this classic single solidified B.J. Thomas’ place in not only country music, but Pop music as well. Some songs come along that slow time down to speak to the heart. This single shoots through the origins of time to deliver craft and conviction along with a feel-good intention.

To keep up with everything BJ Thomas, follow his socials linked below and visit HERE.

About B.J. Thomas:
Four-time Grammy award winner and Grammy Hall of Fame inductee, B.J. Thomas has sold over 70 million albums worldwide with a total of 8 #1 hits and 26 Top 10 singles throughout his 50 years in the music industry. As one of Billboard’s Top 50 Most Played Artists Over The Past 50 Years, B.J. Thomas’ hits include “Raindrops Keep Fallin’ On My Head,” “Hooked On A Feeling,” “I’m So Lonesome I Could Cry,” “I Just Can’t Help Believing,” “(Hey Won’t You Play) Another Somebody Done Somebody Wrong Song,” “Don’t Worry Baby,” “Whatever Happened To Old Fashioned Love” and “New Looks From An Old Lover.”