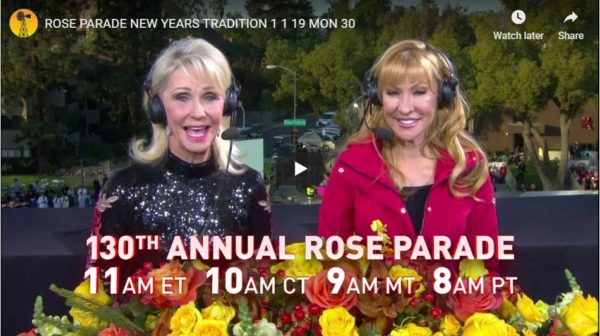 The fun kicks off with a pre-show starting at 10:30 a.m. ET with both the pre-show and the parade repeating on RFD-TV and The Cowboy Channel immediately following the conclusion of the parade (the schedule/times are listed below). The parade can be watched globally on RFD-TV’s Country Club online streaming service and is available via Amazon on Rural TV, Roku, and at rfdcc.com.

The Pre-Show will take you on a behind-the-scenes tour of the floats, performers, marching bands, horses, and myriad other special attractions as they all get ready to take their places in the spectacle that is the Tournament of Roses Parade, held annually in Pasadena, California.

The Tournament of Roses is America’s New Year Celebration, a greeting to the world on the first day of the year, and a salute to the community spirit and love of pageantry that have thrived in Pasadena for more than 100 years.

Some of these New Year’s Day events will also be broadcast on The Cowboy Channel and on RURAL RADIO Channel 147 on SiriusXM.

New Year’s Eve at Billy Bob’s Texas with The Randy Rogers Band:
Celebrate New Year’s Eve with one of Texas’ own, Randy Rogers Band, who will be rocking Billy Bob’s into the wee hours of 2019! Over the course of a dozen releases and multiple major award nominations, Rogers and his band have gone from rowdy college-town bar group to one of the most successful, longest-running acts in the always burgeoning Texas music scene. (Click here to buy tickets)

Blake Shelton Pop up Show: September 20
Country Music Super Star Blake Shelton made a surprise stop at Billy Bob’s Texas on Thursday, September 20, 2018 for a Free “Pop Up” concert that lasted almost 2 hours. Fans began lining up early Thursday morning for their chance at getting a wristband that would allow them inside for this special performance. Backstage guests included Gwen Stefani, Neal McCoy, and Randy Travis.

Billy Bob’s has had a relationship with BLAKE SHELTON that dates back to his first performance at The World’s Largest Honky Tonk in 2000.

In addition to the millions of visitors that have enjoyed the 2000 square foot dance floor, it has been featured in the movies  “Necessary Roughness”, “Pure Country”, “Baja, Oklahoma”, “Over The Top” and music videos including the most recent one by the popular band Midland.

Co-owner Billy Minick among Texans named to ProRodeo Hall of Fame (Download photo, here)
A part-owner of Billy Bob’s Texas, Billy Minick has been inducted into the Texas Heritage Songwriters Association for his role in creating the “Live at Billy Bob’s” record label. He’s also won the National Cowboy and Western Heritage Museum’s Ben Johnson Award for creating a “positive image for rodeo and the Western lifestyle.” He even shares his life with a former Miss Rodeo America — his wife and businesswoman, Pam Minick, a member of the National Cowgirl Hall of Fame.

He’s grateful for every honor, he says. He’s lived a blessed life. But, he found himself overwhelmed at the news of his newest title. It’s his “holy grail” of lifetime achievement.

On Aug. 4, Minick was inducted into the ProRodeo Hall of Fame in Colorado Springs, Colo.

About Pam Minick:
Pam Minick is a former Miss Rodeo America, and is one of the most well-known faces in the world of rodeo. She’s a former Women’s World Champion Calf Roper and qualifier to the Women’s National Finals rodeo in team roping.

Minick has appeared as a sports commentator/interviewer on over 1000 nationally televised Rodeo, Equestrian, and Country Music specials.