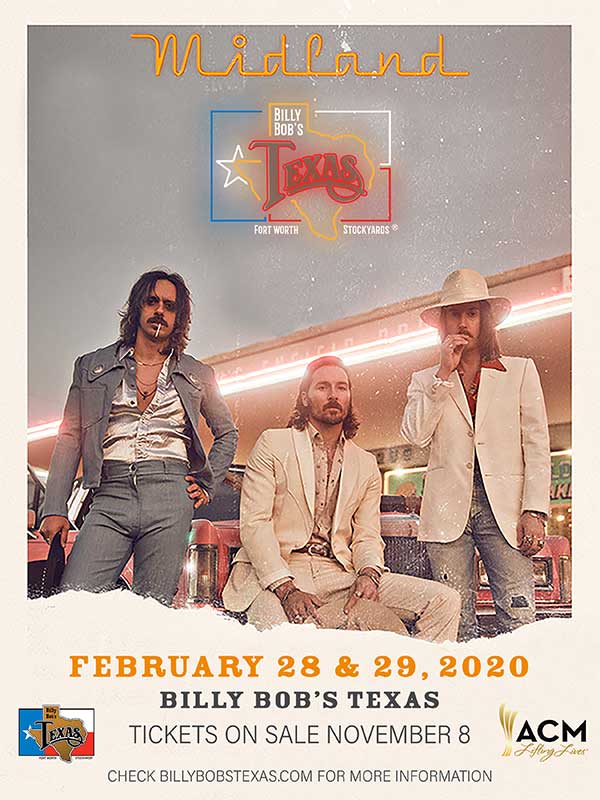 FORT WORTH, Texas – Midland returns to Billy Bob’s for back to back concerts February 28 & 29, 2020 to close out February on LEAP YEAR. Midland’s two previous concerts at The World’s Largest Honkytonk have been sellouts. Their music video “Burn Out” was filmed in one single take at Billy Bob’s and has 22 million YouTube views. These 2 concerts will benefit The Academy Of Country Music Lifting Lives initiative. Tickets go on sale Friday, November 8 at 10 am, at billybobstexas.com.

About Midland:
Hailing from Dripping Springs, Texas, lead vocalist Mark Wystrach fronts Midland’s rich sound that is rounded out with lead guitarist Jess Carson and bass player Cameron Duddy. Rooted in tradition in both sound and style, the trio initially garnered attention playing clubs in the region. Their freshman album, ON THE ROCKS was declared “the year’s best Country album” by Washington Post and earned the No. 1 position on Billboard’s Top Country Album Sales chart upon release. Their debut No. 1 single “Drinkin’ Problem,” earned the band their first GRAMMY Awards nominations for Best Country Song and Best Country Duo/Group Performance. Midland was also named New Vocal Group of the Year at the 2018 ACM Awards. The band recently “Mr. Lonely,” the first single off their second album “Let It Roll”. The video stars actor Dennis Quaid starring as “Mr. Lonely.”