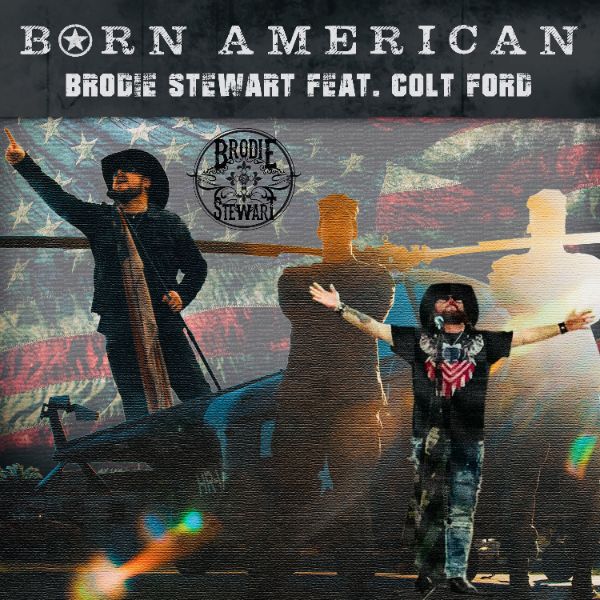 Stewart’s patriotic new song is the first single from his forthcoming new self-titled album, due out summer 2019

“Anytime I get the chance to work with a friend, and stand up and say thank you to the men and women that lay it on the line for all of our freedom, I’m the first in line. I don’t care what side of the fence you are on politically. We owe the men and women who provide our freedom a debt that can never be repaid.” – Colt Ford

“I’ve thought this song has been good for a while now, but always thought there would be an opportunity to make it great. Brodie and Colt combined to make a feel good anthem about America and Americans.” – Nate Deaton, KRTY

SAN FRANCISCO, Calif. – San Francisco-based southern rocker Brodie Stewart is thrilled to reveal that his new music video for “Born American” – featuring Colt Ford – made its world premiere on Heartland’s Country Music Today on Saturday, April 13 at 6:05 pm ET/PT, with re-airings on Sunday, April 14 at 12:05 am ET/PT, and Monday, April 15 at 2:05 pm ET/PT.

Shot on the flight deck of the USS Midway Museum and at the Flying Leatherneck Aviation Museum in San Diego, “Born American” is a patriotic, yet countryfied rock n’ roll salute to all those in our military who have served. It features both active and retired U.S. military personnel prominently throughout the video.

“The moment we finished this song we knew we had something special,” Stewart acknowledged. “It was our opportunity to give back to those who deserve it the most. Having Colt Ford on the track was icing on the cake! This video is dedicated to our true heroes, the U.S. Military, both active and veterans! Thank you for your service! Amen!”

On his debut album “Born American”, Brodie teamed up with guitarist/ producer/ songwriter Adam Shoenfeld (Jason Aldean, Tim Mcgraw, Luke Bryan, Keith Urban) to co-produce and play on the album along with several top players, including working with one great engineer Aaron Chmielewski in Nashville.

When asked about his current album Brodie states, “I’ve found my place in Country Music where my heart has always been. The great lyrics, honesty, passion and one kick *** party is what it’s all about!”

About Brodie Stewart:
Brodie Stewart grew up in the San Francisco Bay Area, Sacramento and spent his summers in Red Bluff, California. At a young age his favorite things to do were going to the Rodeo, listening to country music, singing and playing guitar. Soon enough, Brodie formed and fronted a southern rock band and had the good fortune of touring the country opening up for big artists in front of sold out arenas. His band even charted on Billboard. With his southern rock roots, Brodie returned to what he loved the most, country music.