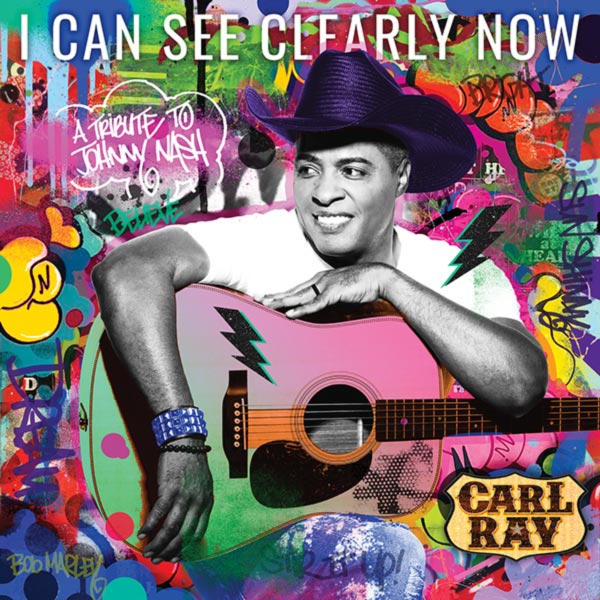 “What a rockin’ new spin on a timeless and incredible classic! The vocals just seem to hug you. This is exactly what the world needs right now! It feels like Carl Ray tuned his heart to the healing the nation is seeking… this song should be played everywhere! This would’ve made Johnny Nash very proud.” – Danica Hart, Chapel Hart

“Country music singer/songwriter Carl Ray adds his signature voice and amazing songwriting talents to bring us his version and refreshing tribute to Johnny Nash’s 1972 classic hit “I Can See Clearly Now.”  This is a guaranteed chart-topping single and Johnny Nash would be proud!” – Judy Shields, The Hollywood Times

“Carl Ray’s tribute to artist Johnny Nash is a deliciously country-fried version of a classic reggae hit. Ray demonstrates that genres can be pushed as far as the imagination will allow.” – Matt Bailey, The Music Universe

“Carl Ray has a pure quality to his voice. He has made Johnny Nash’s “I Can See Clearly Now” fresh as the day it was written, but with his own special touch. A perfect tribute to Johnny’s biggest hit and now Carl Ray has made it a smash hit again!” – Ward Bond, host of LCW Music Edition

“’I Can See Clearly Now’ is a message of hope. In the darkest times of our lives, there is always light that can overshadow and overwhelm that darkness. This song is that light and that is why it has stood the test of time. Our greatest days are ahead of us. Our attitudes truly determine our altitudes. Let’s spread this message of hope like our lives depend on it—because it does.” – Carl Ray

NASHVILLE, Tenn. – Country music singer/songwriter Carl Ray’s latest single, “I Can See Clearly Now” serves as a breath of fresh air and hope while remaining true to the classic masterpiece originally sung by his mentor, Johnny Nash. During their friendship, Nash and Ray agreed that they would one day record a record together. Turning back the hands of time to fulfill this promise, Ray found the inspiration to pay homage to his musical hero after Nash’s passing in 2020 while witnessing the hardships the world has faced over the last year. Ray’s upbeat version of this classic is a true sensation that delicately weaves new life into the storyline. The tune is laced with his tenor appeal which has been often compared to Nash. Ray’s rendition of “I Can See Clearly Now” single will surely become a household favorite once again, having us all singing, dancing, and looking past obstacles to dream a brand new dream for our world.

“I Can See Clearly Now” is available to download and stream on all digital services and was exclusively premiered by Nashville.com!

“Johnny Nash is an American treasure. Nash was a great father, son, and husband. I was privileged to have this legend open up the treasure chest of his heart to me,” shares Carl Ray. “He was a friend, mentor, big brother, and sometimes a pain in the butt. We sang in church together, we prayed for this country together, went hunting, fishing, and often sang underneath the Texas stars. Nash even taught me how to write songs and more importantly, how to ride a horse! I hope this tribute makes him proud, as I know he is listening from above.”

“I Can See Clearly Now” achieved success in the United States and the United Kingdom when it was released in 1972, reaching number one on the U.S. Billboard Hot 100 and Cash Box charts. It also reached number one in Canada and South Africa.

Guided by Johnny Nash, Carl Ray has been performing and writing music for years and his passion shines throughout every song he creates. Ray puts even more heart into “I Can See Clearly Now” as a way to thank the person who helped him get his start in music. Ray has a unique experience of not only being a country music entertainer but a co-host on “Atlanta Live” with his wife, Gail Williams. He has released multiple singles including “I Stand With This Country” which was released in 2020 and went to #1 in Cash Box 2021.

He has been interviewed by the Associated Press, Billboard, US News and World Report, Legacy Magazine, Green Card Magazine (Paris, France), Richmond Times, and recently on Newsmax, Rolling Stone, Dispatch, Denver Post, and many other print and major online outlets.

Ray has also recorded with The Queen of Bluegrass Rhonda Vincent, David Ball, and Johnny Nash. Ray has also penned several songs for his mentor Johnny Nash which Nash recorded on his last album “Here Again.”

To keep up with future events and everything Carl Ray, follow the social channels linked below.