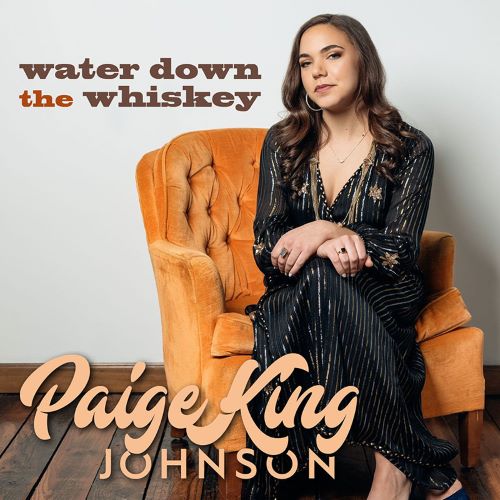 “Water Down The Whiskey” to make its debut at Country Radio beginning Oct. 14

Johnson hosting introductory meet-and-greet luncheons with media and industry in Nashville on Oct. 17 & Nov. 15 – Please RSVP to Jason@2911.us to attend

NASHVILLE, Tenn. – Emerging Nashville-based singer and songwriter Paige King Johnson has released a brand new lyric video for her debut single, “Water Down The Whiskey.” Exclusively premiered by Center Stage Magazine yesterday, the song is the North Carolina native’s reflective tribute to her classic country roots, mixed with her own modern edge to songwriting and the art of storytelling.

“I always tell people that ‘Water Down The Whiskey’ is my sassy girl song,” Johnson said behind a smile. “It’s a message about someone recognizing the warning signs of the other person in the relationship leaving, but calling them out on it to let them know they will be just fine with the break up. It’s saying, go ahead and do it (leave) if you’re gonna do it.”

The recent Belmont University graduate is ready to spread her wings and chart new territory with grit and honesty. Her new single channels the sensitivity of Kacey Musgraves while dishing out the unapologetic nerve of Miranda Lambert. The modern day break up tale is pouring more than just a whiskey shot with an upcoming music video and fall radio tour, slated to begin in October. Johnson’s confident ownership of her craft is a direct result of the compelling female staples she grew up on—females who have at times strayed from the mainstream path to carve their own. With a heartfelt conviction to write genuine songs she can be proud of for years to come, Johnson is ready to go down any path that calls her name – as long as she can walk it in her favorite pair of boots.

“I started finding my own voice thru writing, becoming more confident, and owning the fact that my personal feelings and experiences were worth talking about, singing about, and putting on paper,” Johnson reflects. “My main goal with music is to keep it authentically me and authentically country. As long as I continue to achieve those two things, I will remain satisfied and happy on this journey, no matter where it takes me.”

Stream/Buy “Water Down The Whiskey” at ffm.to/ymbjon4

About Paige King Johnson:
Born in a quiet North Carolina town just 22 miles south of Raleigh, as a young 9-year-old girl, Paige King Johnson spent her summers under the crepe myrtles imitating the styles of Loretta, Patsy, Waylon, and Merle. Having a grandpa as her biggest fan also meant receiving the gift of her first guitar – a baby Taylor – and enrolling in lessons. After her grandpa passed, the bright-eyed dreamer carried on his memory by taking her newfound discovery to local fairs, festivals, and any other stage she was allowed to stand on. As she grew older, Johnson added “opening act” to her resume, supporting chart topping artists like Scotty McCreery, Neal McCoy, Luke Pell, and James Otto. And with high school graduation came the realization that this was more than a hobby. The Angier native traded in horse pastures and back roads for the bright lights of Music City in 2015. Upon starting school at Belmont University for Music Business, Johnson honed in on the magic that had heavily influenced her as a child: the art of storytelling thru songwriting.

The famous Bluebird Café was just one of many writers’ circuits around Nashville that provided a safe space for Johnson to meet other writers, try out new tunes, and get feedback. In return, Johnson began captivating audiences with her down-home stage presence, cut straight to the bone stories and raw country voice, reminiscent of the classic country era. In the last four years, Johnson has traveled back and forth between Nashville and the Carolinas, playing shows like the North Carolina State Fair and running her dinner theater, Country on the Outskirts of Town, that she founded in high school.  Johnson’s quarterly show provides an atmosphere for locals to enjoy Southern cooking, fellowship with friends, and the sounds of classic and current country music with some gospel thrown in.  A three-time Carolina Music Awards Nominee for Best Country Female Artist, Johnson’s devoted homegrown fan base continues to expand farther than just her backyard.