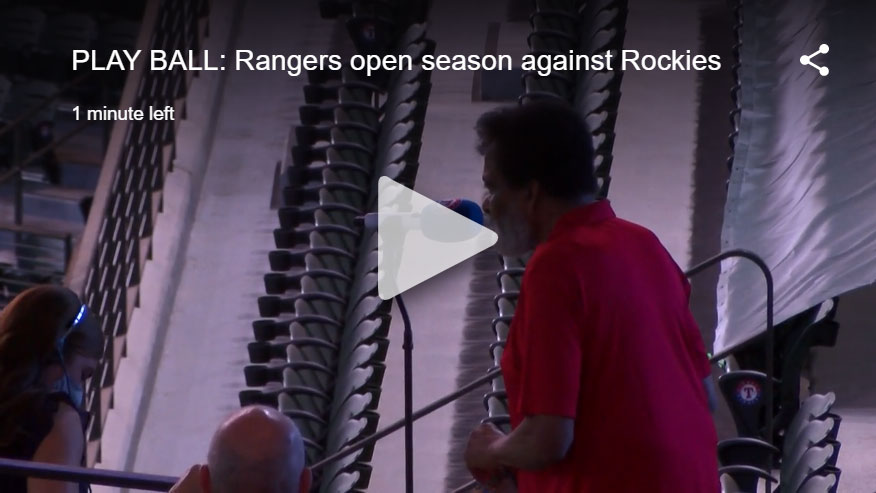 ARLINGTON, Texas. – Three-time GRAMMY® Award-winning, Country Music Hall of Fame and Grand Ole Opry member Charley Pride performed the National Anthem Friday night at the Texas Rangers season opener vs. the Colorado Rockies. The game was a wildly different take on America’s favorite past-time, with cardboard fans in the stands, players in masks and roar of the crowd produced by Memorex, but nonetheless, it was still baseball. Texas Governor Greg Abbott delivered the first pitch, albeit virtually, from Austin, followed by Pride’s performance. The game was the team’s first in the new Globe Life Field ballpark.

“I was in the left field from where I was singing the anthem and I thought everything went fine,” said Pride. “I would have loved to been down there with the players —  to have been one of the players, but I love the game! I couldn’t be down there — I was like a whole field away from them, doing the anthem. With the virus, and with my age, that’s the way it had to be!”

“When I go to spring training I dress with all the coaches – before I get in the club they always ask me ‘when are you gonna sing for us’ and I just tell them ‘well, set it up!'”

“I think it was a fine game. It was the first time I saw the park and it’s a beautiful! I enjoyed everything I did today.”

The Rangers beat the Rockies 1-0 with a three-hit shutout.

Charley Pride came from humble beginnings as a sharecropper’s son on a cotton farm in segregated Sledge, Mississippi to landing a career as a Negro League baseball player and then commenced a meteoric rise as a trailblazing country music superstar. Pride’s love for music led him from the Delta to a larger, grander world. In the 1940s, radio transcended racial barriers, making it possible for Pride to grow up listening to and emulating Grand Ole Opry stars like Ernest Tubb and Roy Acuff. The singer arrived in Nashville in 1963 while the city roiled with sit-ins and racial violence. But with boldness, perseverance and undeniable musical talent, he managed to parlay a series of fortuitous encounters with music industry insiders into a legacy of hit singles, a Recording Academy “Lifetime Achievement Award” and a place in the Country Music Hall of Fame.
“There’s always been a handful of people with global appeal that goes beyond the face value of the culture of Country music. Mr. Pride is absolutely one of those folks.”
– MARTY STUART

About Charley Pride:
Charley Pride is celebrating more than 50 years as a recording artist. He has enjoyed one of the most successful careers in the history of country music and is credited with helping to break color barriers by becoming the first black superstar within the genre. A true living legend, he has sold tens of millions of records worldwide with his large repertoire of hits. A three-time GRAMMY® award and Recording Academy “Lifetime Achievement Award” winner, Pride has garnered no less than 36 chart-topping country hits, including “Kiss An Angel Good Morning,” a massive #1 crossover hit that sold over a million singles and helped Pride land the Country Music Association’s “Entertainer of the Year” award in 1971 and the “Top Male Vocalist” awards of 1971 and 1972. A proud member of the Grand Ole Opry, Pride continues to perform concerts worldwide and has toured the United States, Canada, Ireland, the United Kingdom, Australia and New Zealand over the last several years. Pride received the Crossroads Of American Music Award At 2019 GRAMMY Museum® Mississippi Gala in November of 2019, and has plans to release a new album soon.

PORTIONS OF THIS ARTICLE ARE SOURCED FROM KETK