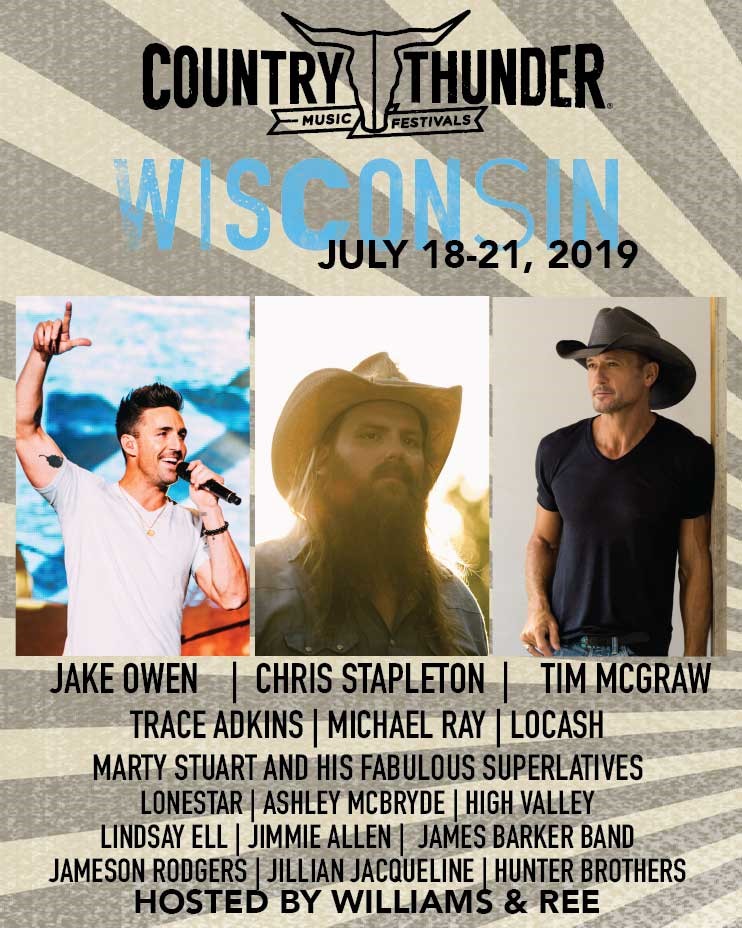 “Country Thunder Wisconsin has established itself as a must-see event every summer in beautiful Twin Lakes,” says Country Thunder Music Festivals CEO, Troy Vollhoffer “The fans in this part of the world make the Country Thunder experience special, and we are truly excited to announce these headliners for them.

“Ticket sales have been brisk since we announced Chris Stapleton at last year’s event. By adding Tim McGraw, Jake Owen and one more very special headline guest, who will be unveiled in January, we feel like 2019 is going to be a blockbuster year.”

Stapleton has never played Country Thunder Wisconsin, but he is no stranger to fans of country, rock and roots music. The announcement of the five-time Grammy Award, and astonishing 14-time ACMA and CMA winner, created a frenzy when he was announced during last year’s festival.

The Lexington, Kentucky native is truly a once-in-a-lifetime artist who transcends musical boundaries and genres – Sunday evening will be a closing night like no other.

There have been very few American country artists more consistent than McGraw over the past 25 years, and CT Nation will be thrown for a loop when one of the genre’s most consummate performers takes the stage.

Recent hit singles, “Neon Church” and “Thought About You” are currently showcasing the country music legend at the peak of his considerable powers.

Longtime Country Thunder Wisconsin favorite Jake Owen returns to Twin Lakes on a hot streak which has included a whopping five hit singles from his No. 1 album, American Love. Think of how good” I Was Jack (You Were Diane)” and “American Country Love Song” are going to sound under the stars at the fabulous Shadow Hill Ranch!

Country Thunder Wisconsin 2019 is rolling in – see you all there!

Four-day passes are available for three easy and incredibly low payments of $53 – there is no better value in country music. Reserved seating, camping, glamping and all the extras are also available. Visit countrythunder.com to purchase, or order by phone at 1-866-388-0007. Facebook, Twitter and Instagram all @countrythunder.