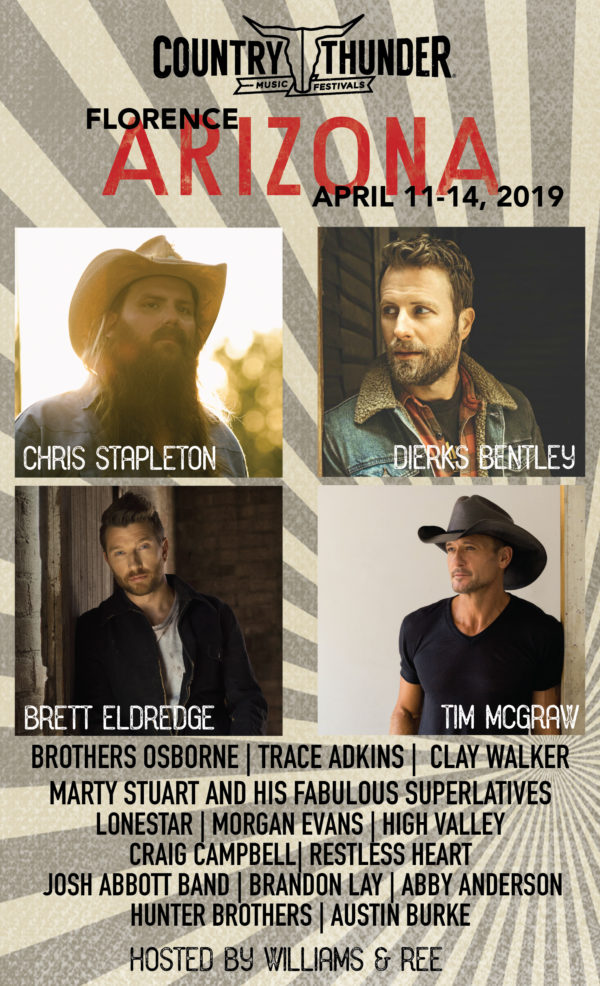 FLORENCE, Ariz. – As announced by Billboard this morning, Country Thunder Arizona will roar into Florence like never before this April 11-14, 2019. Today organizers announced another jaw-dropping line-up for one of America’s favorite country music events.

“2018 was a record-breaking year in Arizona and we knew that we had to up the ante for 2019,” says Country Thunder Music Festivals CEO, Troy Vollhoffer “We are excited to announce these headliners for the incredible fans who have made Country Thunder Arizona what it is.”

Stapleton has never played Country Thunder Arizona, but he is no stranger to fans of country, rock and roots music. The announcement of the five-time Grammy Award, and astonishing 14-time ACM and CMA winner, has been a major coupe for the 2018 ACM Festival Of The Year.

The Lexington, Kentucky native is truly a once-in-a-lifetime artist who transcends musical boundaries and genres – Sunday evening will be a closing night like no other.

There have been very few American country artists more consistent than McGraw over the past 25 years, and CT Nation will be thrilled when one of the genre’s consummate performers takes the stage on Friday night.

Recent hit singles, Neon Church and Thought About You are currently showcasing the country music legend at the peak of his considerable powers.

Saturday? Well . . . Saturday is going to be a party when homeboy Dierks Bentley returns for a command performance on the massive Country Thunder main stage.

During a roll which has lasted the better part of the past two decades, Bentley has amassed a shocking 30 hit singles – any one of them is going to sound amazing with over 30,000 home state fans singing right along!

No stranger to stardom himself, Brett Eldredge could be the dark horse of a stacked 2019 headline line-up in the Arizona desert.

With seven top-10 hits and four top-5 albums to his credit, Eldredge has earned his stripes through nine years of relentless touring, and a reputation as one of the top live performers in country music – his Thursday evening headline slot is a guaranteed early weekend highlight.

Country Thunder is known for showcasing not only the hottest acts in country music, but also introducing new talents that often transition to some of the biggest acts in the world. Both Eric Church and Luke Bryan were early afternoon acts on Country Thunder stages and have become two of the most recognizable names in country music. Country Thunder CEO Troy Vollhoffer is proud to continue this tradition and today announces Nashville New Faces – bringing the brightest young Nashville talent to each Country Thunder show. Throughout the year he won’t just book them to play, but he will introduce them to the world during his podcast called Nashville New Faces! Be ready country music fans – the next superstar may be discovered here!

Country Thunder Arizona 2019 is coming in hot – see you all there!

Today (until midnight) is the final day for $130.00 four-day passes, after which time they will be available for four easy and incredibly low payments of $40.00 plus taxes and fees – there is no better value in live country music. Visit countrythunder.com to purchase, or order by phone at 1-866-388-0007. Facebook, Twitter and Instagram all @countrythunder.

About Country Thunder:
Now in its 25th year, Country Thunder in Florence, Ariz., annually hosts the biggest names in Country music onstage and a sold-out audience of tens of thousands. The festival prides itself in offering something for fans of any age. Country Thunder not only has a consistently top-notch line-up with a mix of legendary, up-and-coming and contemporary artists, but also multiple stages showcasing the best local talent, Electric Thunder, which features DJs spinning country, red dirt and rock with an EDM/club twist, numerous food and specialty item vendors, helicopter and thrill rides—including a Zip Flyte and the Slingshot—and more.