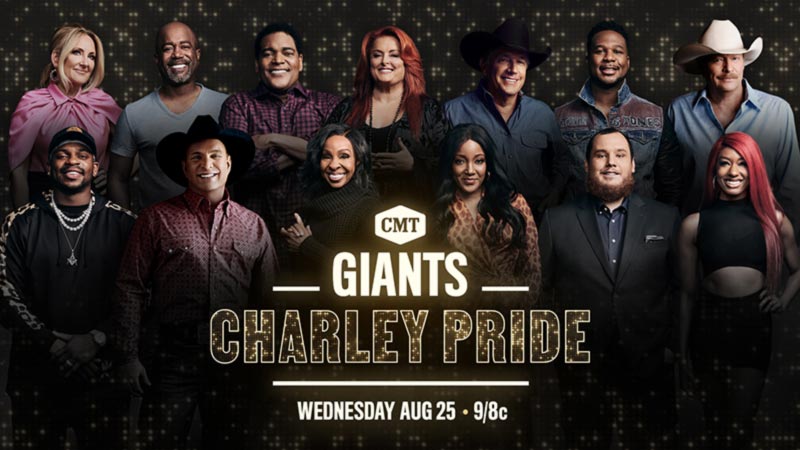 WHAT: “CMT GIANTS: Charley Pride” is an uplifting celebration honoring the extraordinary life and legacy of trailblazing country music titan Charley Pride. The star-packed, 90-minute event features special performances and interviews from family, friends, and collaborators who appear to share their personal memories and reflect on Pride’s lasting legacy, his wife Rozene and son Dion, blended alongside rare archival photos, interviews, and performances, with clips and commentary from Charley Pride himself.

WHO: The special brings together Charley’s superstar friends and some of the biggest names in music today to celebrate his most legendary hits, including:

WHERE: Watch on CMT.

ABOUT CHARLEY PRIDE:
Charley Pride celebrated more than 50 years as a recording artist, enjoying one of the most successful careers in country music history, and is credited with helping break color barriers by becoming the first black superstar within the genre. A true living legend, he sold tens of millions of records worldwide with his large repertoire of hits. A three-time GRAMMY® award and Recording Academy “Lifetime Achievement Award” winner, Pride garnered no less than 36 chart-topping country hits, including “Kiss An Angel Good Morning,” a massive #1 crossover hit that sold over a million singles and helped Pride land the Country Music Association’s “Entertainer of the Year” award in 1971 and the “Top Male Vocalist” awards of 1971 and 1972. A proud member of the Grand Ole Opry, Pride performed concerts worldwide and has toured the United States, Canada, Ireland, the United Kingdom, Australia, and New Zealand over the last several years. He received the Crossroads Of American Music Award At the 2019 GRAMMY Museum® Mississippi Gala in November of 2019, and the Country Music Association’s Willie Nelson Lifetime Achievement Award one year later in November 2020. On December 12, 2020, Pride died at the age of 86 from complications due to COVID-19. His memory and storied legacy will live on through his vast library of stories and songs, with forthcoming plans for a final album release, public celebration of life ceremony, tribute concert, and biopic film. Full bio available here and follow Charley Pride on Facebook and at CharleyPride.com.