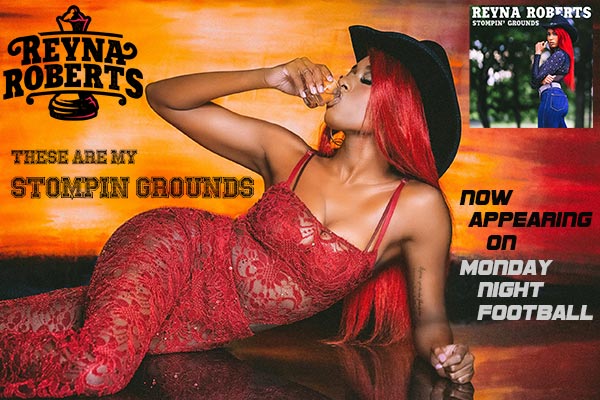 NASHVILLE, Tenn. – Rising Country singer/songwriter Reyna Roberts continues to lay it all on the line for fans with the unmatched success of her stand-out single, “Stompin’ Grounds.” This hard-hitting Alabama anthem has recently been picked up by ESPN and was featured during Monday Night Football. In addition, “Stompin’ Grounds” can now be found on the official ESPN Music ‘Grind Mode’ playlist on Spotify. The triumph of the single is a direct reflection of Robert’s genuine southern roots and provides a window to her experiences of growing up and having family in the South. “Stompin’ Grounds” is available to download and stream on all digital platforms.

Reyna continues to strive for stardom. Remaining humble and forever thankful for the support of her passions, she continues to make headlines in features for notable media outlets across the world including Rolling Stone, Billboard, American Songwriter, The Boot, and Wide Open Country to name a few. Fans will not want to miss what Roberts has in store for the coming months! This is only the beginning for the elite entertainer, Reyna Roberts!

“Her new full-throttle track, “Stompin’ Grounds” proves, her other influences (Gretchen Wilson, The Chicks) find their way into her music.”
– Melinda Newman, Billboard

“Roberts is a black woman singing bangers like “Stompin’ Grounds” that would fit right in on country radio. Carrie Underwood is already a fan.”
– Marissa R. Moss, Rolling Stone Country

“Stompin’ Grounds” is one of the most purely fun country songs of the year so far. You’ll be hypnotized and tapping your foot along in no time.”
– Ellen Johnson, Paste Magazine

“Roberts is not afraid of being bold. She is sweet but fiery, mature but outspoken and she is making waves within the industry. Everyone is talking about Reyna Roberts, and pretty soon you will be too.”
– Brittany Vance, Country Sway

“After I picked my jaw off the ground, I immediately put Roberts on my radar because I knew her career was getting ready to take off.”
– Bethany Bowman, Tennessee Star

About Reyna Roberts:
From a young age, Reyna’s parents (both Army veterans) exposed her to many artists across various genres of music: Aretha Franklin, The Chicks, Led Zeppelin, Christina Aguilera, Gretchen Wilson, Destiny’s Child, and Journey to name a few. This early exposure to music created the soundtrack of her life. Reyna’s first performance was at three years old at a bar in Fairbanks, Alaska where she sang “Lady Marmalade.” In 2014, Reyna recorded her first song, “Lying to Myself,” illustrating a crush on the captain of her high school wrestling team. In addition to her athletic abilities and undying passion for music, Reyna is also an active volunteer within the community. She has performed to assist in fundraising efforts for organizations such as Rett Syndrome Awareness, The Wounded Warrior Project, Teen Impact Affiliates, and the Empowerment Project. Because of family experiences with PTSD and other mental health disorders, Reyna is a committed advocate in supporting military service members and veterans. Reyna is gearing up to release her first single, “Stompin’ Grounds,” produced by Noah Henson, with Oath Management and represented by 2911 Media. With undeniable charisma, the possibilities are endless for the groundbreaking entertainer, Reyna Roberts.