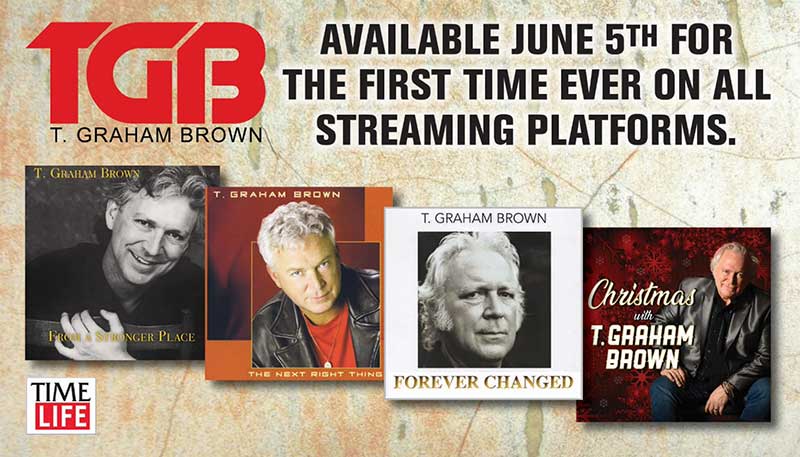 ‘From a Stronger Place,’ ‘Forever Changed,’ ‘The Next Right Thing’
and ‘Christmas with T. Graham Brown’
To Be Available on All Major Digital and Streaming Platforms

NASHVILLE, Tenn. – Chart-topping country music star T. Graham Brown joins forces with Time Life to reissue four of his albums in digital format on June 5 and to release an all-new album this fall. From a Stronger Place, The Next Right Thing, Christmas with T. Graham Brown and his GRAMMY-nominated album Forever Changed (featuring Leon Russell, The Oak Ridge Boys, Steve Cropper, Jimmy Fortune and more) will all be available on major digital and streaming platforms via Time Life. Additional information on his forthcoming album will be announced in the coming weeks.

T. Graham Brown has recorded over 15 studio albums that have delivered more than 28 singles on the Billboard and Gospel charts. Six of these singles reached Number One and eight more reached the Top Ten. Brown’s voice is also recognized from his singing in advertising campaigns for McDonald’s, Disneyland, Almond Joy, Coca Cola, Dodge Truck, Ford, Dr. Pepper, Mountain Dew, Hardee’s and many others including the wildly popular Taco Bell “Run For The Border” television spots.

“I’m really looking forward to working side by side with such an iconic American brand as Time Life,” said Brown. “They know how to deliver music to fans and we’re going to do great things together.”

“We’ve worked with T. Graham Brown for the past several years as a featured artist on our StarVista LIVE Country Music Cruise, and we approached him with the idea of building our working relationship into multiple dimensions,” added Mike Jason, Time Life Senior Vice President of Strategic Partnerships, Marketing & Live Entertainment. “His talent, body of work and vision are a perfect fit for Time Life.”

Christmas with T. Graham Brown
Have Yourself A Merry Little Christmas
Here Comes Santa Claus
I’ll Be Home For Christmas
Rockin’ Around the Christmas Tree
Silver Bells
Run Run Rudolph
Jingle Bell Rock
White Christmas
Santa Claus is Coming in A UFO
Away In A Manger
Mary Had A Little Lamb

Time Life offers artists and brands unparalleled opportunities to connect with their fans. As a longtime leader in multi-platform marketing, the company uses direct-to-consumer channels that reach nearly 90 million people each year. It also offers cross-pollination with its other divisions, including its award-winning direct response television division, a robust retail label, its StarVista LIVE experiential music-themed cruises and an extensive array of broadcast alliances.

About T. Graham Brown:
T. Graham Brown has recorded 15 studio albums and charted more than 20 singles on the Billboard charts. He has had multiple number one hits in country, gospel and blues. Brown’s voice is also recognized from his singing in advertising campaigns for McDonald’s, Disneyland, Almond Joy, Coca Cola, Dodge Truck, Ford, Hardee’s and many others including the Taco Bell “Run For The Border” television spots. In early 2015, Brown released his latest Grammy nominated album, Forever Changed, which featured collaborations with Vince Gill, Jason Crabb, The Oak Ridge Boys, Jimmy Fortune and more. T. Graham Brown still actively tours throughout the year, including multiple appearances on the legendary Grand Ole Opry and television appearances such as Larry’s Country Diner and Country’s Family Reunion. Brown’s uniqueness has made him one of the most beloved and iconic performers of the day.

For more information, visit www.tgrahambrown.com and follow his socials linked below.