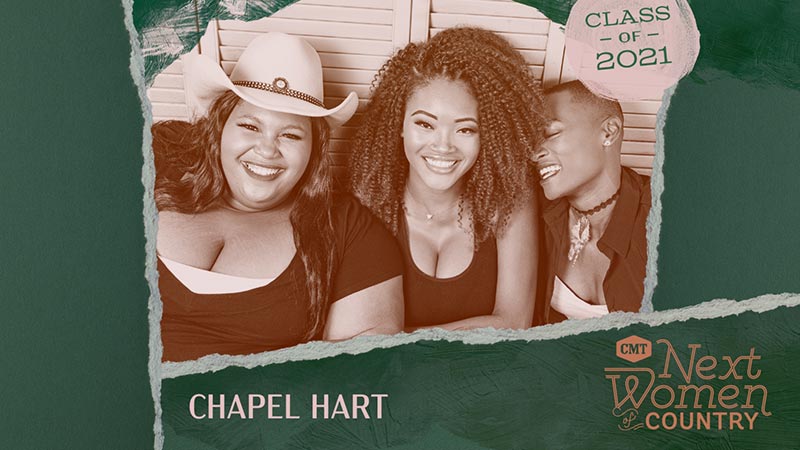 “We couldn’t be more honored to be a part of such a prestigious program! CMT Next Women of Country has given a voice to women in country music; we are so glad that Chapel Hart will now get a chance to be heard and we will be forever grateful,” shares Chapel Hart.

Tomorrow, Caylee Hammack (2020), Rissi Palmer, and Lauren Alaina will host a one-hour digital special, ‘CMT Presents: Next Women of Country Class of 2021,’ on CMT Facebook and YouTube channels featuring full performances from each of the new inductees, with a special appearance from CMT Equal Play ambassador Jennifer Nettles, who also headlined the 2016 CMT Next Women of Country Tour.

“We’re thrilled to welcome the newest class of CMT’s Next Women of Country,” said Leslie Fram, Senior Vice President, Music & Talent, CMT. “These artists represent the best of fresh new talent and the diversity of styles that country music has to offer. We look forward to providing this group more exposure than ever before, particularly within the ViacomCBS family on Pluto TV, as well as providing them with essential resources to help them build their musical careers.”

Over the next year, the new NWOC class will receive cross-brand support for their music and videos across CMT and CMT Music channels, CMT Radio (220+ channels), CMT Hot 20 Countdown, CMT.com, and @CMT social channels, in addition to cross-promotional opportunities for ViacomCBS’ MTV Entertainment Group.

In addition, CMT will offer its new NWOC inductees access to independent media training, photography consultations, and artist advocacy opportunities designed to assist them in supporting charitable causes and social issues. These resources will be provided by Nashville-based communications firm, The Change Agent·cy.

Chapel Hart kicks off the new year with the release of “I Will Follow.” This upbeat country single highlights the importance of following your heart. Despite the mixed signals that the world may send, the sure-fire way to happiness is through the heart. This trio struts into 2021 with nothing to lose and everything to prove, calling all to join them in loving life and not taking the world too seriously. A love for all humans no matter race or background is a message that we all need to hear after a long, confusing year. “I Will Follow” written by Savannah Keyes, Jennifer Hanson, and Nick Brophy and produced by Brophy with Jeffrey Glixman. The single will be available to download and stream on all digital services on Friday, February 5th, 2021.

“We heard this song and instantly knew we had to have it!” shares Chapel Hart. “This song is literally the song of our hearts! In the last year of our life during the dreadful pandemic, we somehow managed to follow the directions of these lyrics, and this is how, we believe, our success has skyrocketed! Following your heart works every time!”

To keep up with the latest information and everything Chapel Hart, follow the socials linked below:

While Chapel Hart has claimed the field of singer/songwriters, their live performances have been applauded with rave reviews. Their shows are more than just another concert experience. That special family blend of harmonies whether a cappella or backed by their full band will stop you in your tracks. While they may have come from humble beginnings, their shows bear no witness to that. They come at you full throttle, confident, and with high-energy. Their beautiful ballads will make even the toughest weep while at the same time offering hope to those in need. Their rocking country songs will have you fist-pumping in the air while knowing full well a bit of joy in a broken world has just fallen upon you.

Being the first female band to ever headline the New Orleans Jazz Festival in Innsbruck, Austria, these ladies have thoroughly proven the ability to move any audience, regardless of language barriers. They are currently managed by the mega-producer Jeff Glixman of Kansas Fame. Chapel Hart has performed around the world, captivating thousands with their own unique blend of country soul. They are without a doubt one of the hardest working groups to have emerged from Nashville by way of New Orleans.

About CMT Next Women of Country:
A staunch advocate for country music’s female artists, CMT first launched its “Next Women of Country” campaign in 2013 as a substantial, meaningful effort to support and expose developing female talent, both signed and unsigned, in a male-dominated format. The initiative has grown significantly since its inception, showcasing emerging female artists across all CMT screens, including CMT and CMT Music, various digital series, and six tours anchored by superstar acts including Jennifer Nettles, Martina McBride, Sara Evans, and most recently, Tanya Tucker, who is slated to resume touring later in 2021. This year’s 2021 class marks a total of 85 female acts that have been named as part of the program since its inception, which includes notable alumni of the franchise who have achieved both commercial and critical acclaim include Ashley McBryde, Brandy Clark, Gabby Barrett, Ingrid Andress, Kacey Musgraves, Kelsea Ballerini, Lauren Alaina, Lindsey Ell, Maren Morris, Mickey Guyton, and RaeLynn.