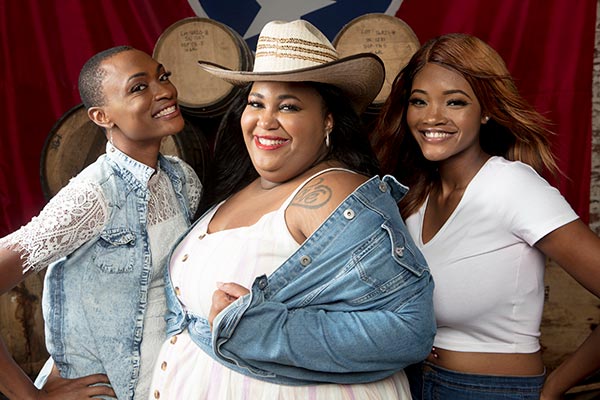 NASHVILLE, Tenn. – Rising country powerhouse trio Chapel Hart turn water into wine and come up with nothing short of a miracle for their debut single, “Jesus & Alcohol.” Pouring up a double shot of passion and soul, this song simultaneously welcomes fans into the world of gospel and whiskey. These New Orleans natives raise the bar with clever lyrics that instill faith in the belief that in any setting, whether that be at church with a Bible open or a bar with bourbon in hand, God continues to remain by our side. Their major video debut features a slate of celebrity cameos and was premiered exclusively by CMT on Tuesday, September 8th, and will premiere on Chapel Hart’s YouTube channel at midnight CT.

“Whether you prefer to lean towards wine and spirits or the Holy Spirit, Jesus & Alcohol is definitely the song to get you through,” says Trea Swindle.

“We hope that our music will unite people from all walks of life. At the end of the day, music is the one thing that can bring us together,” says Devynn Hart.

In a world of uncertainty and turmoil, Chapel Hart stands tall as a triple threat to deliver a carefully crafted, playful tune that lifts spirits high and builds a sense of hope in the hearts of all who listen. Gracefully strutting their way to stardom, Chapel Hart conquers all challenges that come their way and rise to the top with passion, hard work, and dedication. This trio has taken the globe by storm, raining their talent down on every audience they entertain. Pull up a barstool, grab a drink, praise the Lord and join the world in celebrating the long-awaited release of “Jesus & Alcohol!”

“I can sum up life in 3 words… GOD. MUSIC. LOVE. God is the source for EVERYTHING you need… just ASK! Music is THE language! Love is 100% the cure! Now let’s play some music!” says Danica Hart.

CMT asked the trio a few questions about their self-funded video shoot day:

CMT: What do you remember most about the day/night you shot this video?

“The most memorable part of being on set for this shoot, is all of the talented people on set!” said lead singer Danica Hart. “I was blown away at how many people were there to be a part of the ‘Chapel Hart’ movement! We had a former THE VOICE contestant, a legendary Nashville artist, we had celebrities, volunteers, and everyone felt like family! No egos, no complaints, not so much as an “it’s too hot…” Everyone worked hard and I believed that was the drive and how we made such an amazing music video!”

CMT: How does the video bring your song to life?

“The video really elevates the lyrics and completely paints the story in color in real-time! It’s fun, energetic, and as you watch the video it truly brings the song to life!”

CMT: What message do you hope your fans take away from the video?

“We hope the fans who watch this video take away the message to dream big, have fun, & and ALWAYS believe in yourself! Well… ’cause one day Billy Gibbons of ZZ Top could hear about you and want to be a part of your project!”

CMT: How did it feel to see the finished product for the first time?

“We saw the finished product for our music video and we all just sat there with our mouths open for like ten seconds. I think after we watched the video from beginning to end, something awakened in us, we instantly KNEW we were made for THIS. Any doubt we had was out the window, and with that came so much gratitude & a new level of courage!”

The single and video (at midnight CT) are available for download and streaming on all digital devices at smarturl.it/jesusandalcohol.

While Chapel Hart has claimed the field of singer/songwriters, their live performances have been applauded with rave reviews. Their shows are more than just another concert experience. That special family blend of harmonies whether a cappella or backed by their full band, will stop you in your tracks. While they may have come from humble beginnings, their shows bear no witness to that. They come at you full throttle, confident, and with high-energy. Their beautiful ballads will make even the toughest weep while at the same time offering hope to those in need. Their rocking country songs will have you fist-pumping in the air while knowing full well a bit of joy in a broken world has just fallen upon you.

Being the first female band to ever headline the New Orleans Jazz Festival in Innsbruck, Austria, these ladies have thoroughly proven the ability to move any audience, regardless of language barriers. They are managed by mega-producer Jeff Glixman of KANSAS fame and business partner Darrick Williams. Chapel Hart has performed around the world, captivating thousands with their own unique blend of country soul. They are without a doubt one of the hardest working groups to have emerged from Nashville by way of New Orleans.