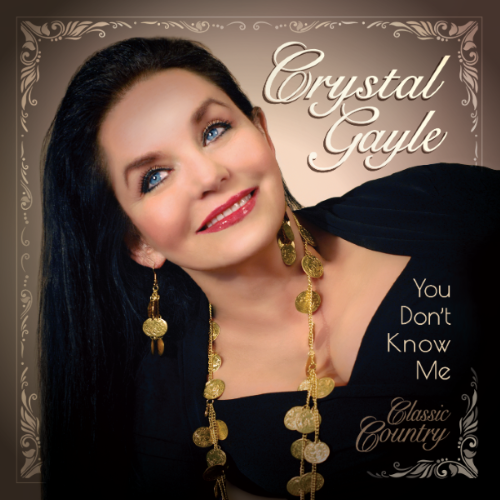 “Her stature [as a queen of country pop] long ago permanently secured, Gayle is now enjoying the freedom to return to her roots with ‘You Don’t Know Me,’ an album made up entirely of classic country.”
– Nancy Kruh, People Magazine

This new collection is a ringing declaration of her loyalty to the style and to the songs she was born to sing.”
— Robert K. Oermann, Author/Journalist

Co-produced, recorded and mixed by Crystal’s son Christos Gatzimos, You Don’t Know Me has already received critical acclaim. Billboard Magazine premiered “Put It Off Until Tomorrow,” the song which finally brings Crystal together with sisters Peggy Sue Wright, and legendary country music icon Loretta Lynn, on a highly anticipated, first-ever recorded trio of them singing together.

“Loretta and Peggy made this album very special by singing “Put It Off Until Tomorrow” with me. It is a song that we have performed together throughout the years. This is the one and only trio performance on record. We’ve done the Boston Pops together. We performed together in Lake Tahoe and Reno and a few things like that. But we’ve never actually made a record together. Peggy Sue still comes out on the road with me, singing backup harmonies. I recorded the track, then Patsy, Loretta’s daughter, asked her to sing on my album. Loretta is such an incredible singer. She got through the song right away and then went, “What’s next?” We should have recorded the whole album together!”

You Don’t Know Me Spotify Playlist Inclusions:
– NPR’s New Music Friday added “Ribbon Of Darkness” to their Spotify playlist for Sept. 6.
– “You Don’t Know Me” on ‘New Traditions: Country Heroes‘
– “I Cried the Blue (Right Out of My Eyes)” on ‘New Music Nashville‘

Follow Crystal at crystalgayle.com or on social media @TheCrystalGayle for the latest news.