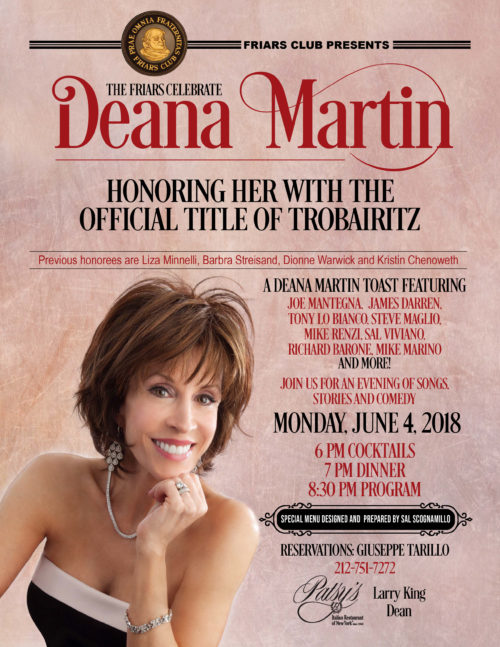 New York, N.Y. – New York, N.Y. – Deana Martin, influential American singer, actor and performer and the very proud daughter of iconic entertainer, Dean Martin, is set to be honored with the official title of Trobairitz by the Friar’s Club in New York City. The prestigious title will be formally presented to Martin on June 4 as part of “A Deana Martin Toast.”

This coveted title has previously been awarded to several other esteemed female entertainers, including Liza Minnelli, Barbra Streisand, Dionne Warwick and Kristin Chenoweth.

“I’m honored and delighted to receive the title of Trobairitz from the world-famous Friars Club,” Martin explained. “I’m in great company … Barbra Streisand, Liza Minnelli, Dionne Warwick and Kristen Chenoweth. Apparently, they only give this award to women under 5’6″.”

The event will include a cocktail reception at 6:00 pm, followed by a 7:00 pm dinner prepared by Chef Sal Scognamillo of Patsy’s Restaurant in New York City, and the awards program beginning at 8:30 pm.

Suggested Tweet:
.@DeanaMartin_ set to be bestowed the title of #Trobairitz by the New York City @friarsclub on Jun 4