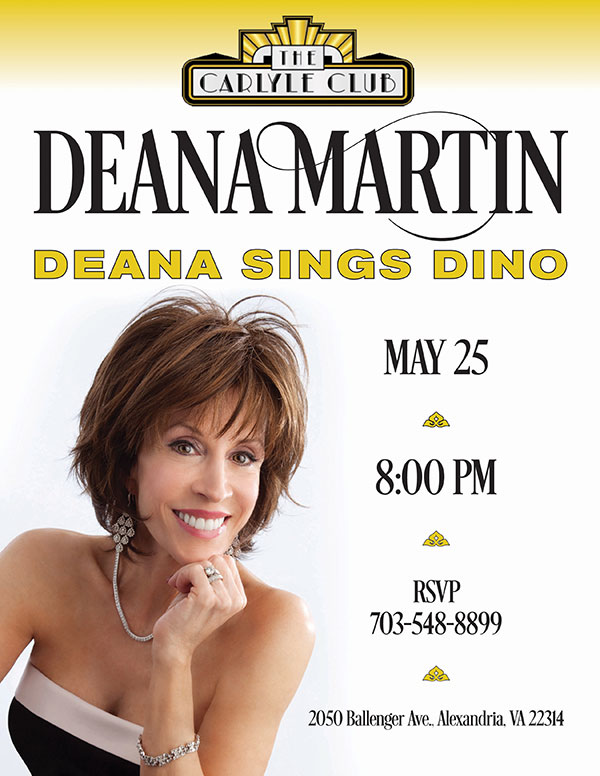 “It’s no wonder she is hailed as an important voice in the annals of popular music. As an all-around entertainer, Deana Martin is without equal.”
– Allen Foster, AXS.com

ALEXANDRIA, Va. – From the moment she walks on stage, Deana Martin takes her audience on a musical journey with her non-stop dynamic energy, honoring her legendary father Dean Martin and other great performers who shaped American music and popular culture for over four decades. Deana Sings Dino is a totally engaging, classy and contemporary presentation of the most beloved songs of all time, capturing the swinging sophistication associated with her dad and the Rat Pack.

In this electrifying musical revue, Deana Martin sings hot new arrangements of enduring hits like, “That’s Amore,” “Volare,” “That’s Life,” “Everybody Loves Somebody,” “Memories Are Made Of This” – songs treasured worldwide by her fans and those of her father, ‘Uncle Frank’ Sinatra and ‘Uncle Sammy’ Davis Jr.

In the words of noted jazz reviewer Don Heckman: “Added to that, Deana performs more far-ranging titles, including “I Love Being Here With You,” “The Lady Is A Tramp,” “Gee Baby Ain’t I Good To You” and “Miss Otis Regrets.” That’s a group of songs that would challenge the skills of most artists in the contemporary pop music world. Deana handles it with an illuminating blend of musicality and interpretive skill.”

One of the many highlights of Deana Sings Dino is the electronic duet of “True Love,” with Dean Martin performing via video. Critics and audiences agree, this is a moving and emotional experience that always brings a standing ovation.

Deana Sings Dino has all the essentials of classic concert entertainment: the world’s best music, personal and often hilarious recollections from Deana’s life and career, interaction with her audience, plus her innate musicianship. Deana Martin is undeniably authentic – a living connection to the greatest era in entertainment!

Axs.com reviewer Allen Foster states: “It’s no wonder she is hailed as an important voice in the annals of popular music. As an all-around entertainer, Deana Martin is without equal.”

Treat yourself and those you love to an evening of a lifetime. See and enjoy Deana Sings Dino.

For more information on Deana Martin, her career and upcoming concert appearances, please visit her website at deanamartin.com.