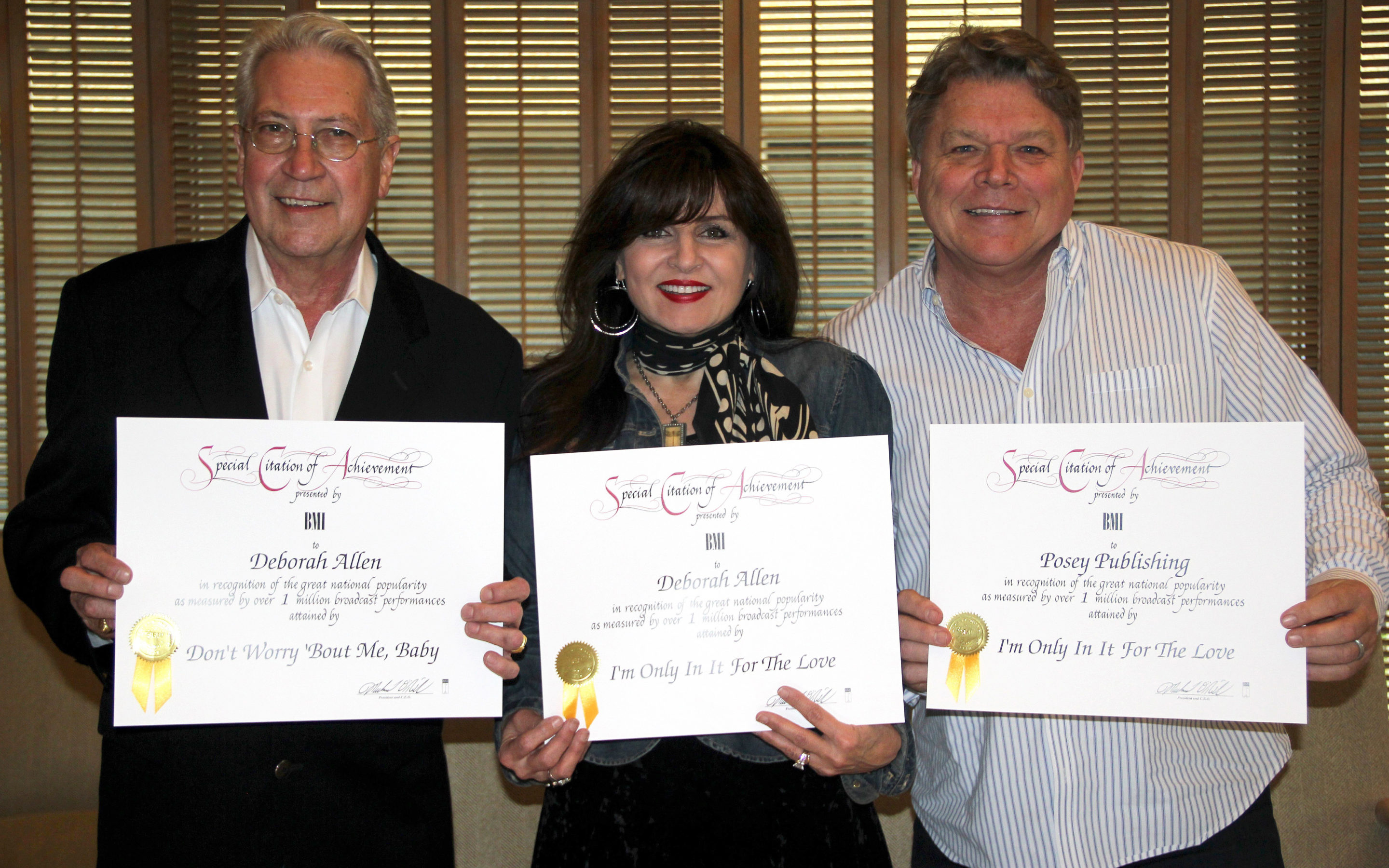 NASHVILLE, Tenn. – Deborah Allen, the fiery country singer who stole America’s hearts with her cross-over smash, “Baby I Lied,” was recently honored by BMI (Broadcast Music Inc.) at their Nashville offices.  Deborah was presented with the coveted Million-Air certifications for Janie Fricke’s “Don’t Worry ‘Bout Me, Baby” and John Conlee’s “I’m Only In It For The Love” by BMI executive David Preston. A Million-Air Award is given to songwriters, composers, and publishers whose songs accumulate over one million U.S. broadcast performances. The acknowledgement is a mark of praise.

Deborah has penned more than 1,600 compositions for hundreds of artists, including smash hits by LeAnn Rimes, Brooks & Dunn, Patty Loveless, Conway Twitty, Tanya Tucker, Janie Fricke, John Conlee, Isaac Hayes, Diana Ross, Sheena Easton, Fleetwood Mac and more. She would later find success of her own, hitting the charts with unique songs like “I’ve Been Wrong Before,” “I Hurt For You,” “Rock Me,” “If You’re Not Gonna Love Me,” “Wrong Side Of Love,” “Break These Chains” and her signature song, “Baby I Lied.”

In addition to these two honors, Deborah has been awarded BMI Million-air certificates for songs penned for other artists Janie Fricke’s “Let’s Stop Talking About It,” Patty Loveless’ “Hurt Me Bad In A Real Good Way,” and Tanya Tucker’s “Can I See You Tonight.”   Deborah has also been awarded BMI Million-air certificates for her own recordings “I Hurt For You,” receiving a one million airplay award and “Baby, I Lied,” receiving a two million airplay award.

About BMI:
Celebrating over 77 years of service to songwriters, composers, music publishers and businesses, Broadcast Music, Inc.® (BMI®) is a global leader in music rights management, serving as an advocate for the value of music. BMI represents the public performance rights in nearly 13 million musical works created and owned by more than 800,000 songwriters, composers, and music publishers. The Company negotiates music license agreements and distributes the fees it generates as royalties to its affiliated writers and publishers when their songs are performed in public. In 1939, BMI created a groundbreaking open-door policy becoming the only performing rights organization to welcome and represent the creators of blues, jazz, country, and American roots music. Today, the musical compositions in BMI’s repertoire, from chart toppers to perennial favorites, span all genres of music and are consistently among the most-performed hits of the year. For additional information and the latest BMI news, visit bmi.com, follow us on Twitter @BMI or stay connected through Broadcast Music, Inc.‘s Facebook page. Sign up for BMI’s The Weekly™ and receive our e-newsletter every Monday to stay up to date on all things music.

Suggested Tweet:
.@DeborahAllen3 receives two new @BMI Million-Air awards for @JanieFricke1‘s “Don’t Worry ‘Bout Me, Baby” and #JohnConlee’s “I’m Only In It For The Love”