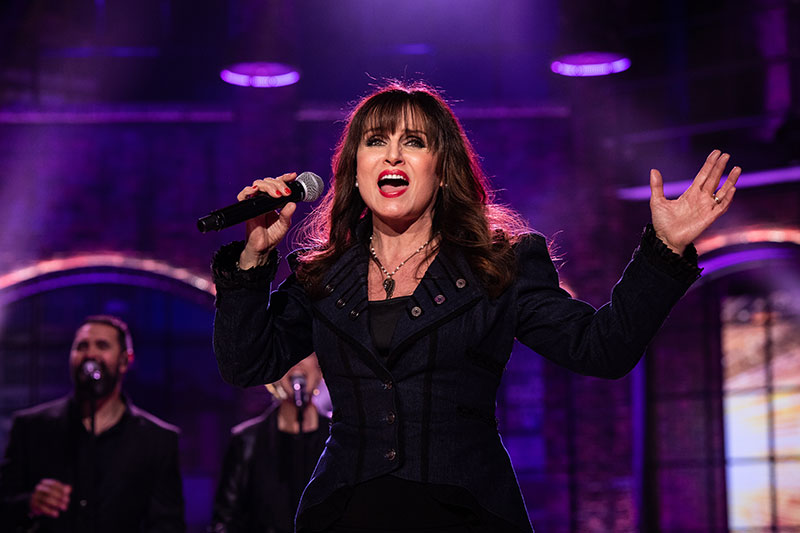 Announces re-release of musical catalog for streaming and download

NASHVILLE, Tenn. – GRAMMY nominated singer/songwriter Deborah Allen is set to appear on HUCKABEE Saturday, February 8th at 8/7c and Sunday, February 9th at 9/8c on TBN. She chats with Governor Mike Huckabee about her career in music as well as her passion to bring music to children through mentoring programs and by donating instruments to Monroe Carell Jr. Children’s Hospital at Vanderbilt, where Allen recently donated 90 ukuleles to their music department.

As part of the interview, Deborah also shares about her participation in a new multi-artist project with T*A*P*S (Tragedy Assistance Program for Survivors). Deborah co-wrote and recorded “Press On Preston,” a song written for the upcoming benefit album Love Lives On, to be released May 2nd.

Allen also performed “Baby I Lied” with Tre Corley and The Music City Connection with Gov. Huckabee on bass guitar. Her thrilling delivery of the crossover hit will be available Monday, February 10th on YouTube.

Tune-in for free on TBN or live stream on TBN.tv. TBN is also available on iOS, android, AppleTV, amazon fireTV, Roku or download the TBN app on Google Play or the iOS App Store. For more information, visit tbn.org.

About Deborah Allen:
Deborah Allen is one of those rare artists who forged their own path to success and ended up building a world-class career in the process. An extraordinarily talented singer, songwriter, producer, performer and actress, Deborah’s unique abilities as an artist may be matched only by her enthusiasm and creativity as an individual. It is that formidable combination of spirit and talent that keeps the Grammy-nominated entertainer in demand.

Allen has penned more than 2,000 compositions for hundreds of artists, including smash hits by LeAnn Rimes, Brooks & Dunn, Patty Loveless, Conway Twitty, Tanya Tucker, Janie Fricke, John Conlee, Isaac Hayes, Diana Ross, Sheena Easton, Fleetwood Mac and more. On her own, Deborah climbed the charts with hits such as “I’ve Been Wrong Before,” “I Hurt For You,” “Rock Me,” “If You’re Not Gonna Love Me,” “Wrong Side Of Love,” “Break These Chains” and her signature song, “Baby I Lied.” In some ways, “Baby I Lied” confirmed the idea that an artist could have success in different formats with the same song – a precedent that would prove to be years ahead of the crossover trends of today. “Baby I Lied” not only appealed to country and pop radio listeners, earning multiple Million Air-Play Awards in the process, but it also resulted in a pair of Grammy nominations for the Delta songstress – one as a vocalist and one as a songwriter.

Throughout her phenomenal journey of hits and accomplishments in every facet of her career, Deborah Allen remains true to her vision. From her discovery by Roy Orbison, to her friendship with Shel Silverstein, and her work with Prince, Deborah creates art entirely on her own terms. With a distinguished career built on success after success, the dynamic singer from Memphis, Tennessee, has no plans of slowing down anytime soon. That’s simply not Deborah Allen’s style.

About T*A*P*S:
The Tragedy Assistance Program for Survivors (TAPS) offers compassionate care to all those grieving the loss of a loved one who died while serving in our Armed Forces or as a result of his or her service. Since 1994, TAPS has provided comfort and hope 24/7 through a national peer support network and connection to grief resources, all at no cost to surviving families and loved ones. For more information, visit taps.org.