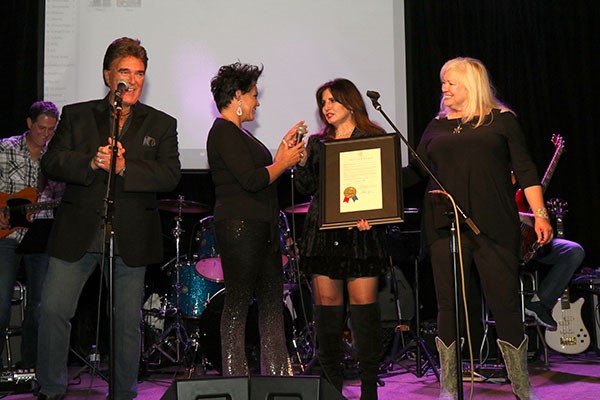 Award was presented during CMA Fest week in Nashville at Country For A Cause by hosts T.G. Sheppard, Kelly Lang and WSM’s Devon O’Day

NASHVILLE, Tenn. – Country music veteran Deborah Allen was surprised with a special presentation by T.G. Sheppard, Kelly Lang and WSM’s Devon O’Day at Nashville’s 3rd & Lindsley Wednesday night during the 6th annual Country For A Cause, benefiting Monroe Carell Jr’s Children’s Hospital at Vanderbilt. A proclamation from Tennessee Governor Bill Lee, celebrating Deborah’s 40 years in country music, was tearfully and happily received. The honor acknowledges not only her contributions as a singer, but also as a celebrated, successful songwriter having been awarded seven BMI One Million Air-Play Awards for her hit songwriting repertoire and one BMI Two Million Air-Play Award for her smash hit “Baby I Lied.”

“I was completely stunned and deeply honored to receive such a phenomenal Proclamation from our Tennessee Governor, Bill Lee,” says Deborah. “The surprise, heartfelt presentation given at the Country For A Cause concert by my wonderful friends, T.G. Sheppard and the beautiful and talented Kelly Lang, along with WSM’s beloved Devon O’Day made this even more special! I will treasure this amazing award and special memory always.”

Kicking off the festivities prior to CMA Fest 2019, the 6th annual Country For A Cause concert, which benefits the Monroe Carell Jr. Children’s Hospital at Vanderbilt featured an all star lineup that included some of this biggest names in country music. Along with hosts T.G. Sheppard and Kelly Lang, the lineup included artists such as Crystal Gayle, Mark Wills, Larry Gatlin, Jimmy Fortune, John Berry, Jeannie Seely, Moe Bandy, T. Graham Brown, Tim Rushlow, Deborah Allen, Tim Atwood, Rockland Road, Chonda Pierce, Teea Goans, James Wesley and special, surprise guests Shenandoah, Billy Yates and Joe Stampley. Throughout the concert, fans enjoyed music from over twenty performers, a silent auction, a live guitar auction, and were introduced to Lily Paris, a cancer survivor who was a patient at the hospital. Lily’s speech brought hope and a reality to the audience, showing them the true meaning of the night — to help raise awareness and funds that will help countless families. A total of $14,500 was raised this year, bringing a two year contribution total of $27,000 for the hospital.

Along with all of these honors, Deborah Allen continues to tour and make television appearances including an upcoming appearance on Larry’s Country Diner to be filmed June 19th at Ray StevensCabaRay Showroom in Nashville.

“I am so excited about hanging out with all my friends on Larry’s Country Diner,” says Deborah. “I love all the home spun humor. And, I’ll be bringing some home cooked music too. It’s gonna be so much fun!”

Deborah has penned more than 2,000 compositions for hundreds of artists, including smash hits by LeAnn Rimes, Brooks & Dunn, Patty Loveless, Conway Twitty, Tanya Tucker, Janie Fricke, John Conlee, Isaac Hayes, Diana Ross, Sheena Easton, Fleetwood Mac and more. On her own, Deborah has climbed the charts with hits such as “I’ve Been Wrong Before,” “I Hurt For You,” “Rock Me,” “If You’re Not Gonna Love Me,” “Wrong Side Of Love,” “Break These Chains” and her signature song, “Baby I Lied.” In addition, Deborah was inducted into The International Rockabilly Hall of Fame in 2017.

About Country For A Cause:
Country For A Cause (501c3) is an annual concert held just before the CMA Music Festival in Nashville. It is a charity organization that was officially created in 2018. It has presented a charity concert for six years that originally assisted families dealing with the expenses of cancer treatment and Pearl Point Cancer Research of Nashville. Artists that have performed throughout the years include T.G. Sheppard, Kelly Lang, Crystal Gayle, The Bellamy Brothers, Mark Wills, T. Graham Brown, Ty Herndon, Doug Supernaw, Deborah Allen, Baillie and the Boys, Collin Raye, Billy Dean, John Berry, Jeannie Seely, Jan Howard, Tim Atwood, Ashton Shepherd, Leona Williams, Jody Miller, Lulu Roman and countless others. In 2018, Country For A Cause teamed with Monroe Carell Jr. Children’s Hospital at Vanderbilt as the sole beneficiary of proceeds raised. For more information, visit facebook.com/groups/1661154010787818/ and facebook.com/countryfac.