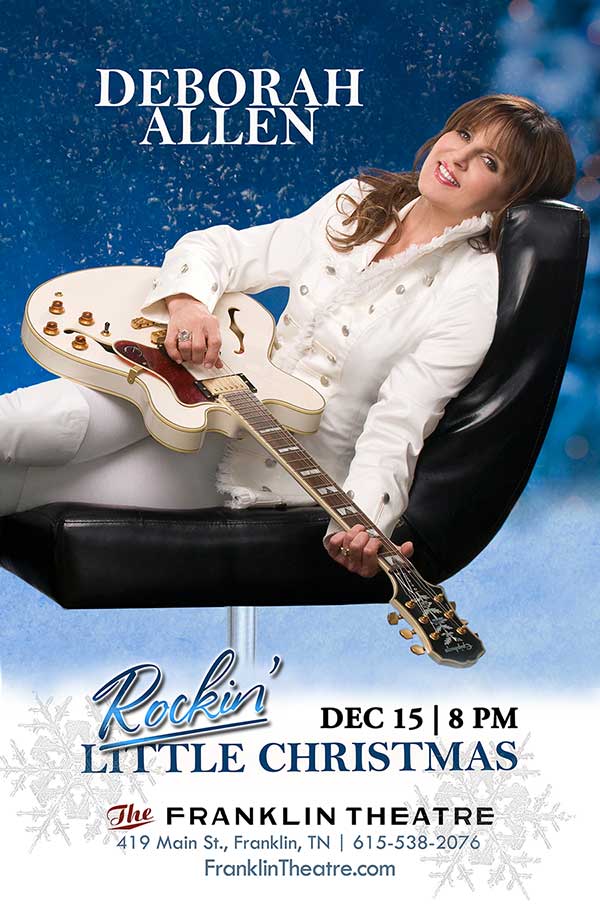 NASHVILLE, Tenn. – Country Music legend Deborah Allen will be bringing her live ‘Rockin’ Little Christmas‘ show to the historic Franklin Theater on December 15th to fans of all ages. With a full band that will also include a horn section, Deborah will be pulling out all of the stops and performing her most memorable Christmas show ever.

“Christmas is my favorite time of year. I love it!” says Deborah. “The twinkling lights, being with family and friends, the many acts of kindness, the joy in the children’s eyes on Christmas Day and celebrating the birth of Jesus makes the world a brighter place!”

Deborah has penned more than 1,600 compositions for hundreds of artists, including smash hits by LeAnn Rimes, Brooks & Dunn, Patty Loveless, Conway Twitty, Tanya Tucker, Janie Fricke, John Conlee, Isaac Hayes, Diana Ross, Sheena Easton, Fleetwood Mac and more. She found success of her own, hitting the charts with unique songs like I’ve Been Wrong Before,I Hurt For You, Rock Me, If You’re Not Gonna Love Me, Wrong Side Of Love, Break These Chains and her signature song, Baby I Lied.

In addition to her success as a singer-songwriter, Deborah has also written the classic children’s book, ‘The Loneliest Christmas Tree‘ and recently played a role in the movie ‘The Least Of These – A Christmas Story‘ starring g. Michael Nicolosi, Tayla Lynn and Duane Allen of The Oak Ridge Boys, which is currently available on Amazon Prime Video. Deborah not only acted in the film, she performed five songs included on the soundtrack, three of which she wrote.

In some ways, Baby I Lied confirmed the idea that an artist could have success in different formats with the same song, a precedent that would prove to be years ahead of the crossover trends of today. Baby I Lied not only appealed to Country and Pop radio listeners, earning multiple Million Air-Play Awards in the process, but it also resulted in a pair of Grammy nominations for the Delta songstress, one as a vocalist and one as a songwriter.

For ticketing information, go to FranklinTheater.com