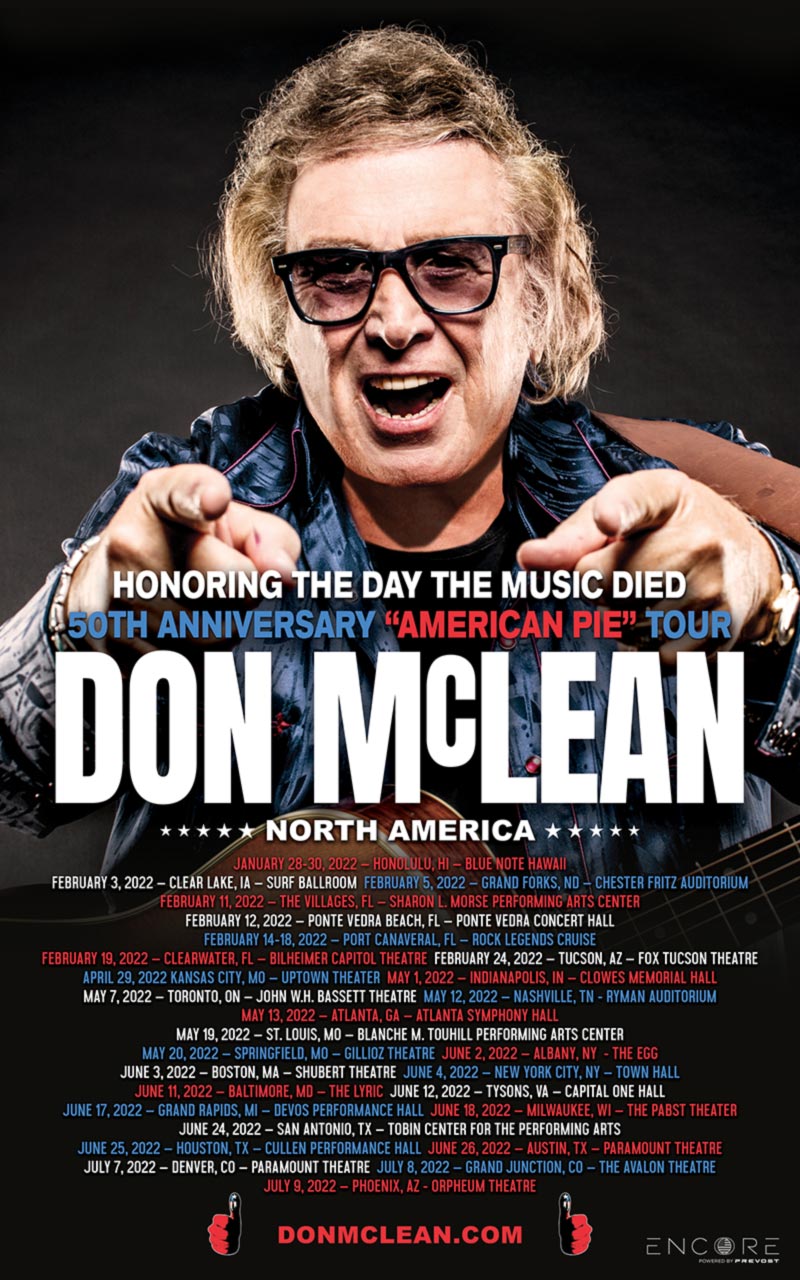 LOS ANGELES, Calif. – As announced in USA Today and ABC News, Grammy award honoree, Songwriters Hall of Fame member, and BBC Lifetime Achievement Award recipient Don McLean is set to embark on his 2022 American Pie 50th Anniversary Tour with 20 additional cities throughout the United States and Canada. Celebrating the 50th anniversary of one of the most iconic songs and album ever this year, McLean will entertain fans across the continent throughout nearly 30 cities from Honolulu to Toronto and everything in between, proving that “bye-bye, Miss American Pie” will forever remain a classic staple in American music.

“After spending the past 18 months at home, I am thrilled to be getting back on the road with my band,” says Don McLean. “2022 marks the 50th anniversary from when American Pie landed at the #1 spot on the Billboard chart and we will be celebrating on tour all year long. We will be performing all the songs from the American Pie album plus many of the other hits that fans will be expecting to hear.”

As tragic as the backstory behind the song “American Pie” is with the much too early death of the new rock’n’roll-hope Buddy Holly, the track is also magnificent and legendary. And “American Pie” still goes to heart as soon as originator Don McLean plays this classic at his concerts. Still, it’s worth remembering that the 76-year-old composer has written and sung numerous other melodic and harmonic successes in his decades-long career with “Vincent (Starry Starry Night),” “Castles in the Air,” “And I Love You So,” and “Cryin’,” all of which will be heard and reveled in along with newer pieces on the upcoming tour.

The eight-and-a-half-minute ballad “American Pie” has been making history since its release in 1971. Alongside songs by other icons such as Bing Crosby, Judy Garland, Woody Guthrie, and Aretha Franklin, McLean’s composition was also voted “Song of the 20th Century”. Handwritten lyrics to the song were auctioned off for more than $1.2 million in 2015, and the composition was added to the Library Of Congress National Recording Registry two years later. Here, you’ll only find a few selected evergreens, such as “Somewhere Over The Rainbow”. So much for the cultural significance of Don McLean and his 1971 stroke of genius!

Over the years, the song has been covered again and again by music icons like Madonna and Garth Brooks. Rapper Drake repeatedly sampled McLean tunes and hip-hop icon Tupac Shakur also cited him as an important influence.

Accordingly, the complete discography of the legendary and still active singer/songwriter is also significant. Among other things, Don McLean has a star on the Hollywood Walk Of Fame and was inducted into the National Academy of Popular Music Songwriters’ Hall Of Fame in 2004.

And he never gets tired of writing new songs and new stories. In 2018, the sound senior released his 19th studio album, ‘Botanical Gardens’ which received rave reviews. Songs from it subsequently proved themselves live and will maybe even find their way into the setlist next year, alongside “American Pie” and all the other feats from this decades-spanning and unparalleled composition and performance career.

About Don McLean:
Don McLean is a Grammy award honoree, a Songwriter Hall of Fame member, a BBC Lifetime Achievement Award recipient, and his smash hit “American Pie” resides in the Library of Congress National Recording Registry and was named a top 5 song of the 20th Century by the Recording Industry of America (RIAA). A New York native, Don McLean is one of the most revered and respected songwriters in American history. After paying his dues in the New York club scene in the late ‘60s, he went on to score mega-hits like “Vincent (Starry, Starry Night),” “Castles in the Air” and many more. His catalog of songs has been recorded by Madonna, Garth Brooks, Josh Groban, Drake, “Weird Al” Yankovic, and countless others. In 2015, McLean’s handwritten manuscript of the lyrics to “American Pie” was auctioned by Christies, selling for just over $1.2 Million. 2019 honored Don with a star on the Las Vegas Walkway of Stars and his song “And I Love You So” was the theme for Prince Harry and Megan Markle’s wedding. Don landed a new recording contract with Time Life in 2020, with whom he released a catalog of recordings as well as a new album ‘Still Playin’ Favorites’. 2021 brought Don’s “American Pie” features in the Avengers’ Black Widow and the new Tom Hanks movie Finch. Don received a star on the Hollywood Walk of Fame, celebrated the 50th anniversary of “American Pie,” recorded a version of the song with a cappella group Home Free, a children’s book has been written, and much more! And when you think things are slowing down, not so for Don McLean!