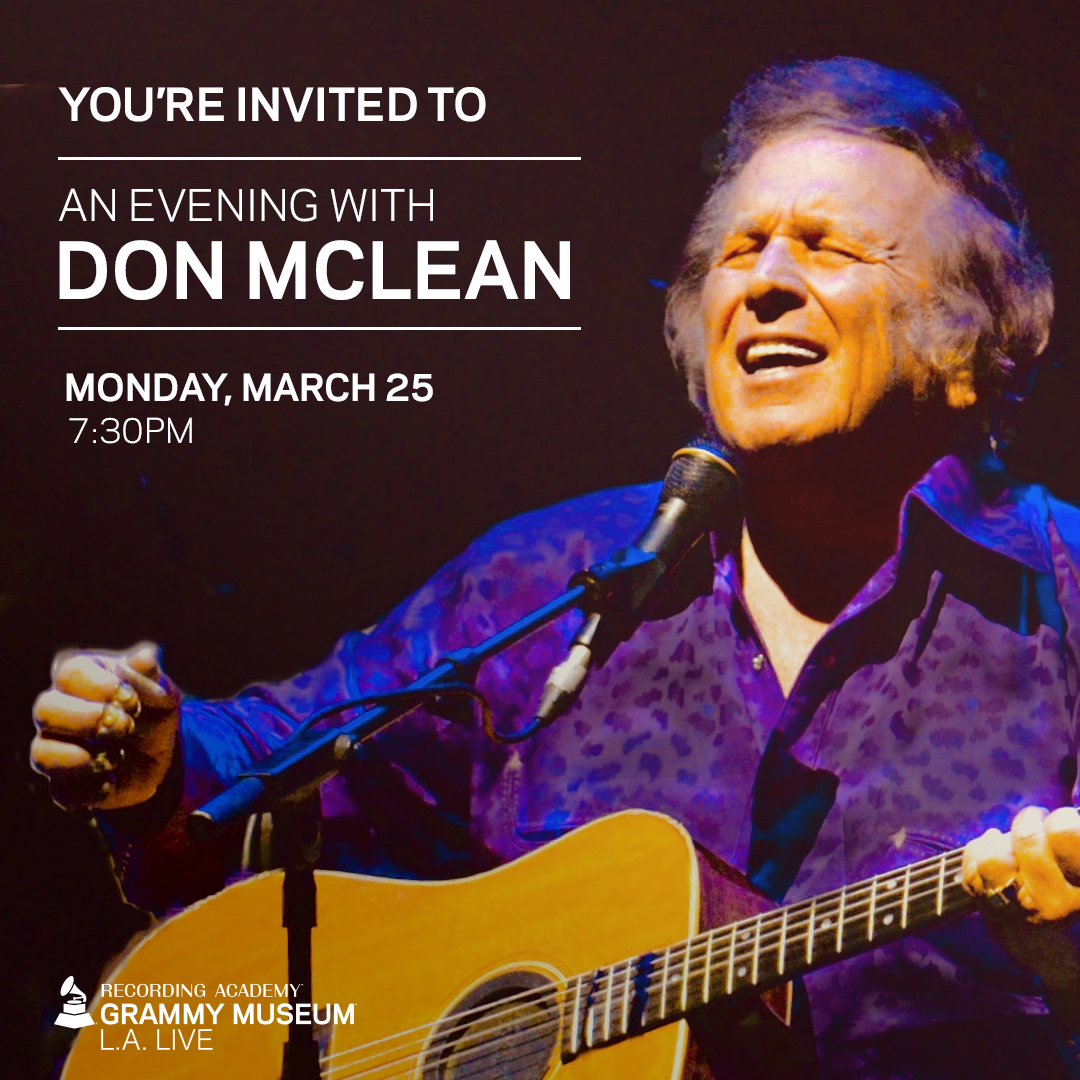 NASHVILLE, Tenn. – There is no slowing down for one of America’s greatest singer-songwriters, Don McLean! Having recently honored the 60th anniversary of Buddy Holly’s death and receiving Million-Air certifications from BMI for over 5 million certified airplays of “American Pie” and 3 million certified airplays for “Vincent (Starry, Starry Night),” McLean continues to bring his classic hit songs to stages around the world.

On March 25, the GRAMMY Museum® in Los Angeles will welcome Don McLean for an intimate conversation and performance, moderated by Scott Goldman in the Clive Davis Theater. No stranger to the Grammy stage, McLean was nominated multiple times and in 2002 “American Pie” was inducted into the Grammy Hall of Fame.

“I look forward to performing at the GRAMMY Museum and continuing my world tour with a return to UK, Australia and other destinations,” said McLean.

With more concert dates being added, McLean is gearing up for another international trek through Australia, Europe and North America. There is just no slowing down one of America’s most legendary songwriters of our generation.

“It is a wonder to me that after all these years my worldwide fan base is as strong as it is,” shares McLean. “I thank all my fans who have supported me, believed in me, bought my records, and attended my shows. I have enormous gratitude for this and the wonderful experiences I’ve had. I hope I can meet many of you. Thank you.”

McLean recently re-released his classic American Pie album in celebration of its 45th anniversary in both CD and vinyl formats. The inspiration for the title track hit McLean on February 3, 1959, when a chartered aircraft crashed in Mason City, Iowa just minutes after takeoff claiming the lives of Buddy Holly, Ritchie Valens, J.P. Richardson – “The Big Bopper” – and the pilot, Roger Peterson. The fateful day was coined “The Day The Music Died” by Don McLean and spawned his hit “American Pie.” The song was released in 1971 and spent four weeks at No. 1 in 1972. In 2001, thirty years later, the Recording Industry Association of America along with the National Endowment of the Arts named the it the fifth greatest Song of the Century.

Tickets for the exclusive GRAMMY Museum® program will go on sale March 7 at noon PT to the general public, and can be purchased at GrammyMuseum.org.