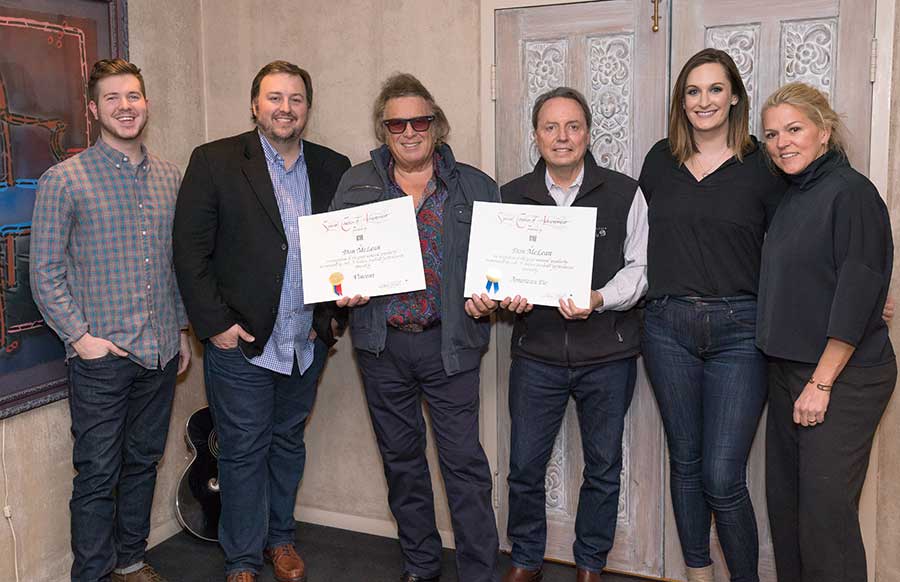 Don McLean, one of America’s best-known singer-songwriters, was recently honored with two awards from BMI (Broadcast Music,Inc.), recognizing his long-standing career and outstanding contributions to the music industry through the iconic hits “American Pie” and “Vincent (Starry, Starry Night).”Don was presented with his Million-Air certifications at the BMI offices in Nashville, Tennessee and accepted the coveted awards from BMI executives Jody Williams, (VP, Creative) and Mason Hunter (Assistant VP, Creative). A Million-Air Award is given to songwriters, composers, and publishers whose songs accumulate over one million U.S. broadcast performances. The acknowledgement is a mark of praise. The two tracks honored, played back-to-back, would total nearly 56 years of continuous airplay.Among the honors he received were five (5) million certified airplays for “American Pie” and three (3) million certified airplays for “Vincent (Starry, Starry Night).” “I was delighted to receive certifications from BMI of these millions of airplays for my songs ‘Vincent’ and ‘American Pie,’ says McLean. “I sincerely thank the radio folks out there and the public for their loyalty to me and my music for so many years. I am very thankful to everybody.”“It was a pleasure to present Don with his Million Air certificates. He is one of the cornerstones of the singer-songwriter movement of the 1970s,” says Mason Hunter, AVP, Creative with BMI. “‘American Pie’ is one of those songs that everyone has an emotional reaction to and we were proud to acknowledge both it and ‘Vincent.’”“American Pie” was recorded and made its debut in 1971. It quickly became a nostalgic staple in American music songwriting with its evocative popularization of the phrase “The Day the Music Died,” referencing the 1959 plane crash of Buddy Holly, Ritchie Valens, and “The Big Bopper” J.P. Richardson.Forty-seven years after its release, there has never been another song quite like “American Pie.” While a product of its era, pinpointing a precise moment of cultural change in the shattered hopes of baby boomers, its impact continues to reverberate down the years with a poignancy and relevance that hasn’t diminished.“Vincent (Starry, Starry Night)” also was released in 1971, and is a tribute to the late Dutch painter Vincent Van Gogh’s painting The Starry Night. The song reached No. 1 on the UK Singles Chart, and No. 12 in the US. It also peaked at No. 2 on the Easy Listening chart.The Country Music Hall of Fame® and Museum in Nashville recently unveiled McLean’s rare composition manuscript pages of “American Pie” and “Vincent” lyrics, as well as his custom Martin D-40DM signature acoustic guitar, as part of their permanent Sing Me Back Home exhibit. The display will be available to view through June.For the most up-to-date information and all of McLean’s tour dates please visit Don-McLean.com.About Don McLean:A New York native, Don McLean is one of the most revered and respected songwriters in American history. After paying his dues in the New York club scene in the late ‘60s, he went on to score mega-hits like “American Pie,” “Vincent (Starry, Starry Night),” “Castles in the Air” and many more. In 2004, McLean was inducted into the Songwriters Hall of Fame by country superstar Garth Brooks. “American Pie” has brought great happiness and hope to millions of people through the years and continues to be honored for its success. In 2000, the song was named one of the Top 5 Songs of the 20th Century by the RIAA and in 2002 was inducted into the Grammy Hall of Fame. 2017 brought a huge honor when the iconic song was inducted into the Library of Congress’ National Recording Registry, joining less than 500 works including “Somewhere Over the Rainbow,” classical music compositions, infamous live broadcasts and similar recordings. McLean continues to tour both North America and abroad bringing a mix of his classic hits with an array of new works, some of which will be released in 2018.About BMI:Celebrating over 77 years of service to songwriters, composers, music publishers and businesses, Broadcast Music, Inc.® (BMI®) is a global leader in music rights management, serving as an advocate for the value of music. BMI represents the public performance rights in nearly 13 million musical works created and owned by more than 800,000 songwriters, composers, and music publishers. The Company negotiates music license agreements and distributes the fees it generates as royalties to its affiliated writers and publishers when their songs are performed in public. In 1939, BMI created a groundbreaking open-door policy becoming the only performing rights organization to welcome and represent the creators of blues, jazz, country, and American roots music. Today, the musical compositions in BMI’s repertoire, from chart toppers to perennial favorites, span all genres of music and are consistently among the most-performed hits of the year. For additional information and the latest BMI news, visit bmi.com, follow us on Twitter @BMI or stay connected through Broadcast Music, Inc.‘s Facebook page. Sign up for BMI’s The Weekly™ and receive our e-newsletter every Monday to stay up to date on all things music.