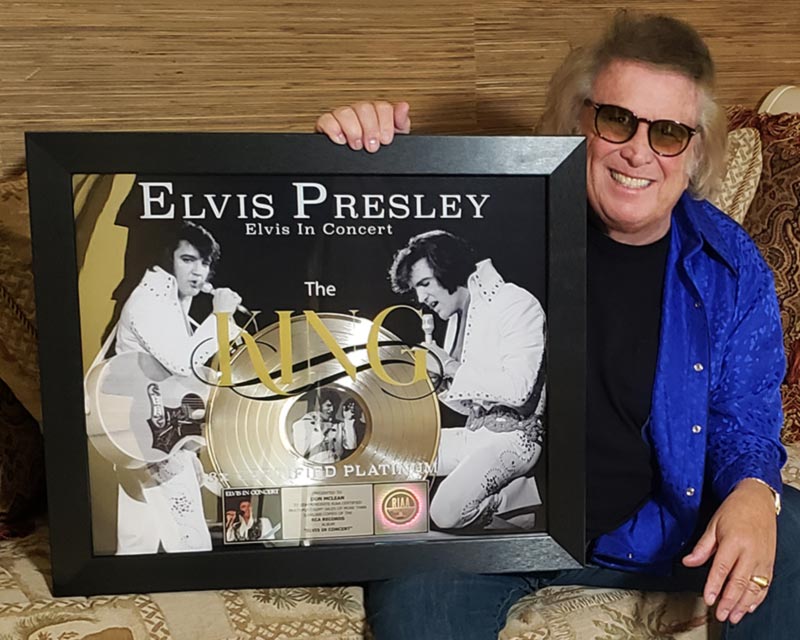 “I still remember the day Elvis’ people called me to tell me that he wanted to do the song,” remembers McLean, whose career also included hits such as “Vincent (Starry, Starry Night)” and “Castles in the Air.” “He did the song just beautifully, even when he was going through his share of difficulties. For a time, it was like watching a guy on a ledge 10 stories up. He was certainly struggling, but he delivered. No matter what, he would deliver that song to his audience.”

NASHVILLE, Tenn. – Don McLean is a Grammy award honoree, a Songwriters Hall of Fame member, a BBC Lifetime Achievement Award recipient, and his smash hit “American Pie” resides in the Library of Congress National Recording Registry and was named by the Recording Industry of America (RIAA) as a top 5 song of the 20th Century. Now celebrating 50 years of his iconic anthem, McLean is making the press rounds to talk about his long-lasting career, the new version of American Pie with acapella group Home Free, his encounter with Col. Tom Parker, and more! Catch McLean this Friday (3/5/2021) at 3 PM (ET) as the featured guest on The T.G. Sheppard Show on SiriusXM’s Elvis Radio.

“T.G. Sheppard is an Elvis authority and was a close friend of the King,” shares McLean. “I really enjoyed talking to him about Elvis and any topic he asked me to discuss. T.G.’s accomplishments in country music as a songwriter and performer are enormous and I told him, maybe I should have been interviewing him. He’s a regular fella and a good Ol boy and I’m happy to call him my friend.”

“My conversation with this iconic artist has to be in my top five favorite interviews that I’ve done since the inception of my show,” says Sheppard. “He is so unique that while speaking with him, I had the feeling that I had known him for years. There is no doubt that we will be friends for years to come. Don is truly one of music’s great treasures.”

McLean is also featured this week by People.com where he shared not only his experience with Elvis Presley recording “And I Love You So,” but also how the world needs good music which helps keep everyone grounded during these trying times. While on the subject of love, he discussed his relationship with his longtime girlfriend, Paris Dylan. “Love is the most important thing you can have,” he tells PEOPLE. “I love my children and I love my girlfriend. I’m crazy for her.”

Don McLean’s latest album Still Playin’ Favorites was released on October 23 and he has announced plans for a feature documentary, ‘The Day The Music Died: The Story Behind Don McLean’s American Pie,’ set for release at the end of 2021. The project’s producer, Spencer Proffer, is also working on the new stage play that will revolve around McLean’s deep catalog (which includes “Vincent,” “Castles in the Air” and “Wonderful Baby”), as well as a children’s book based on his most famous song.

How subscribers can listen:
SiriusXM subscribers are able to listen on SiriusXM radios, and those with streaming access can listen online, on-the-go with the SiriusXM mobile app, and at home on a wide variety of connected devices including smart TVs, devices with Amazon Alexa or the Google Assistant, Apple TV, PlayStation, Roku, Sonos speakers and more. Go to www.siriusxm.com/streaming to learn more.

About Don McLean:
Don McLean is a Grammy award honoree, a Songwriter Hall of Fame member, a BBC Lifetime Achievement Award recipient, and his smash hit “American Pie” resides in the Library of Congress National Recording Registry and was named by the Recording Industry of America (RIAA) a top 5 song of the 20th Century. A New York native, Don McLean is one of the most revered and respected songwriters in American history. After paying his dues in the New York club scene in the late ‘60s, he went on to score mega-hits like “Vincent (Starry, Starry Night),” “Castles in the Air” and many more. His catalog of songs has been recorded by Madonna, Garth Brooks, Josh Groban, Drake, “Weird Al” Yankovic, and countless others. In 2015, one of McLean’s four handwritten manuscripts of the lyrics to “American Pie” was auctioned by Christies, selling for just over $1.2 Million. 2019 honored Don with a star on the Las Vegas Walkway of Stars and his song “And I Love You So” was the theme for Prince Harry and Megan Markle’s wedding. 2020 brought Don a new recording contract with Time Life which he released a catalog of recordings as well as a new album Still Playin’ Favorites. Now, in 2021 “American Pie” will be featured in the Avengers Black Widow and the Tom Hanks movie BIOS, Don will receive a star on the Hollywood Walk of Fame, a children’s book will be released, and production on both a stage play and documentary are underway!  And when you think things are slowing down, not so for Don McLean!