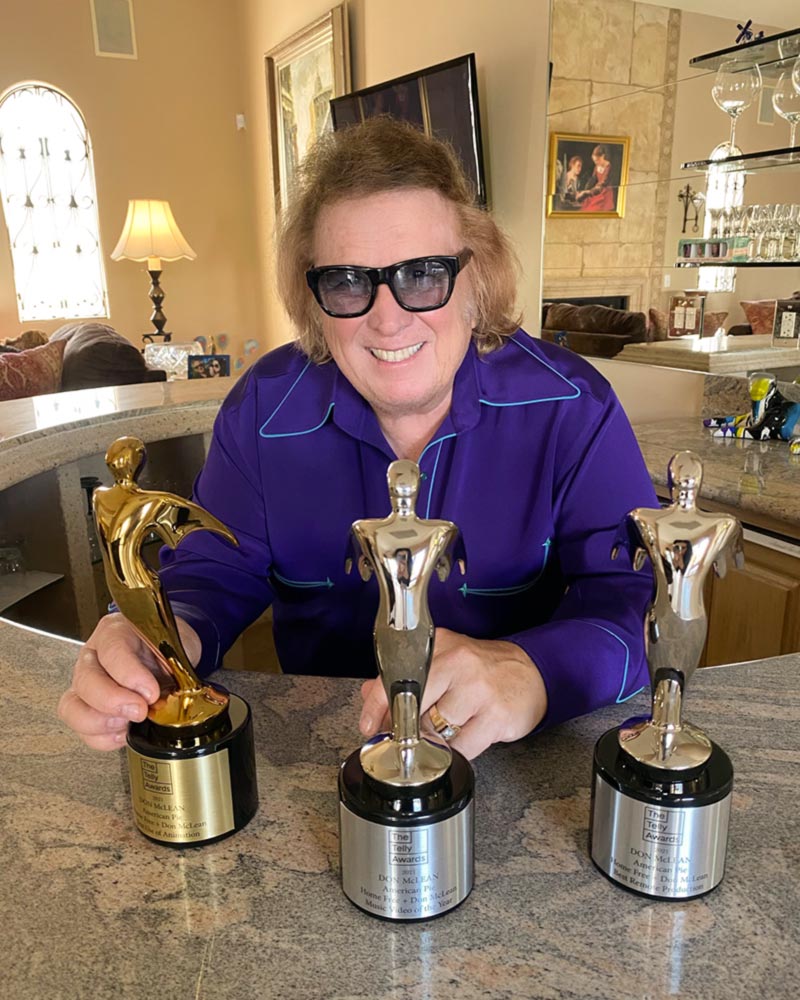 LOS ANGELES, Calif. – “American Pie,” one of the most recognizable and sing-a-long songs, in which, RIAA named one of the top 5 songs of the 20th century, is an iconic anthem by American singer and songwriter Don McLean. Recorded and released on the American Pie album in 1971, the single was the number-one US hit for four weeks in 1972 starting January 15 after just eight weeks on the Billboard charts (where it entered at number 69). The song also topped the charts in Australia, Canada, and New Zealand. In the UK, the single reached number 2, where it stayed for 3 weeks, on its original 1971 release, and a reissue in 1991 reached number 12. Now, 50 years later, the song “American Pie” has been re-recorded with McLean and vocal group Home Free. This version is the first studio collaboration ever done by McLean with any other artist, his only other known recording is with Garth Brooks on Brook’s LIVE album, which was recorded at Central Park in New York City.

“Recording American Pie with Home Free was something that I never imagined I would have done,” says Don McLean. “My manager brought me the idea and I was like ok, but I have never collaborated with anyone before and why would I do this. Then I heard their vocal harmonies and it reminded me of The Jordanaires and then found out they don’t sing at all with instruments. What happened in the studio was great, but what happened when they put it all together was magic! I am honored to have worked with these guys and to win, not just one, but three national Telly awards for the music video is just great!!!”

“We have admired Don’s songwriting for many years and to actually get in the studio with the man that not only wrote the song, but the artist that made it a worldwide anthem was really something you can only dream about,” says Home Free’s Austin Brown. “We did the video remotely due to COVID and making sure we all stayed safe. We never thought that this video would bring home awards, let alone, be so well received by critics and fans. We are humbled and thankful for this opportunity.”

Don McLean began writing the song in Cold Spring, New York, and then continued to finish the song in Chestnut Hill, Pennsylvania. While some have claimed many other places that the song was either written or performed for the first time, McLean confirmed it was first sung at Saint Joseph’s University.

The repeatedly mentioned phrase “the day the music died” refers to the plane crash in 1959 that killed early rock and roll stars Buddy Holly, The Big Bopper, and Ritchie Valens, arguably ending the era of early rock and roll; this became the popular nickname for that crash. However, the overall theme of the song goes beyond its superficial semblance of mourning McLean’s childhood music heroes and reflects the deep cultural changes and profound disillusionment and loss of innocence of his entire generation – the early rock and roll generation – that took place between the 1959 plane crash and either late 1969 or late 1970. The meaning of the other lyrics, which cryptically allude to many of the jarring events and social changes experienced during that period, have been debated for decades.

McLean’s combined version is the fourth-longest song to enter the Billboard Hot 100 (at the time of release it was the longest), in addition to being the longest song to reach number one. Due to its exceptional length, it was initially released as a two-sided 7-inch single. “American Pie” has been described as “one of the most successful and debated songs of the 20th century”, with college courses taught on its lyrics.

About The Telly Awards:
Founded in 1979, The Telly Awards honor excellence in local, regional, and cable television commercials as well as non-broadcast video and television programming. With the recent evolution and rise of digital video (web series, VR, 360, and beyond), the Telly Awards today also reflects and celebrates this exciting new era of the moving image on and offline. The Telly Awards annually receive over 12,000 entries from all 50 states and 5 continents, showcasing the best work created within television and across video, for all screens.

About Don McLean:
Don McLean is a Grammy award honoree, a Songwriter Hall of Fame member, a BBC Lifetime Achievement Award recipient, and his smash hit “American Pie” resides in the Library of Congress National Recording Registry and was named by the Recording Industry of America (RIAA) a top 5 song of the 20th Century. A New York native, Don McLeanis one of the most revered and respected songwriters in American history. After paying his dues in the New York club scene in the late ‘60s, he went on to score mega-hits like “Vincent (Starry, Starry Night),” “Castles in the Air” and many more. His catalog of songs has been recorded by Madonna, Garth Brooks, Josh Groban, Drake, “Weird Al” Yankovic, and countless others. In 2015, McLean’s handwritten manuscript of the lyrics to “American Pie” was auctioned by Christies, selling for just over $1.2 Million. 2019 honored Don with a star on the Las Vegas Walkway of Stars and his song “And I Love You So” was the theme for Prince Harry and Megan Markle’s wedding. 2020 brought Don a new recording contract with Time Life which he released a catalog of recordings as well as a new album Still Playin’ Favorites. Now, in 2021 “American Pie” appears in the Avengers’ Black Widow movie and the upcoming Tom Hanks movie BIOS, Don will receive a star on the Hollywood Walk of Fame, a children’s book will be released, and much more! And when you think things are slowing down, not so for Don McLean!

About Home Free:
All-vocal Country entertainers Home Free have made their mark on the music scene, racking up nearly 600,000 album equivalents globally; embarking on major international tours; amassing 466.8+ MILLION views and over 1.2 MILLION subscribers on YouTube; and being declared “Country music fans’ favorite a cappella group” (Taste of Country). Just in time for the Fourth of July, the acclaimed group has served up a special salute to the red, white, and blue with their brand-new album, LAND OF THE FREE. Chock full of star-spangled covers, all-star collaborations, and one standout original, the 10-track project dropped on June 25 and aims to bring a sense of unity to all those who hear it. Speaking of festivities, Home Free is set to light up this holiday season with their headlining WARMEST WINTER HOLIDAY TOUR – showcasing songs off their festive album, WARMEST WINTER (2020, Home Free Records), which features 12 seasonal staples, memorable collaborations, and Home Free originals – all guaranteed to get you in the holiday spirit. This project follows the acclaimed group’s DIVE BAR SAINTS album, which arrived at #2 on the Billboard Country Album Sales chart. Home Free’s extensive catalog spotlights six Top 10 albums, including TIMELESS, FULL OF (EVEN MORE) CHEER, FULL OF CHEER, COUNTRY EVOLUTION, and their breakout debut, CRAZY LIFE (2014). With praise rolling in from the likes of Billboard, Rolling Stone, FOX & Friends, and American Songwriter, the extraordinary showmen have continued to build a loyal fanbase with their harmony-laden versions of hits by John Mayer, Blake Shelton, Keith Urban, Maren Morris, the Oak Ridge Boys, and more.