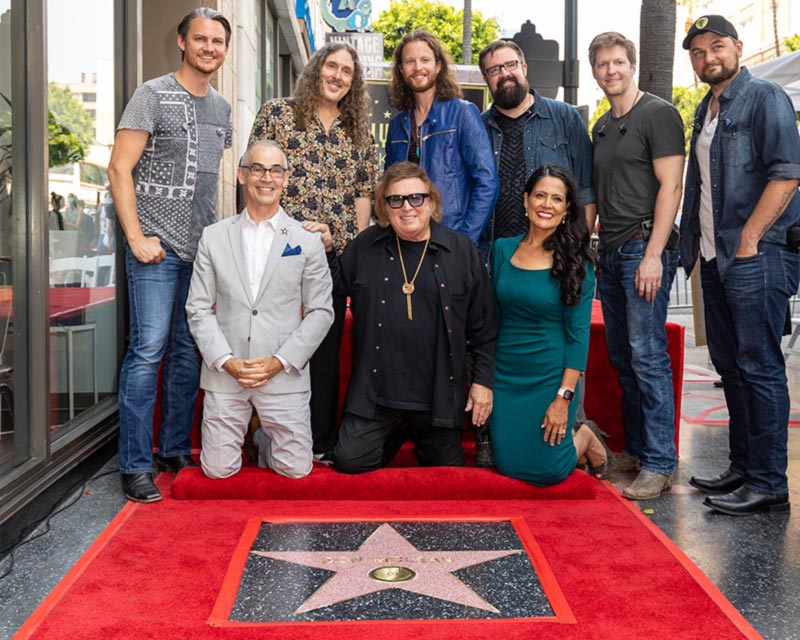 HOLLYWOOD, Calif. – Don McLean, known for his mega-hit “American Pie,” which he wrote and performed, received a star on the Hollywood Walk of Fame earlier today at 6314 Hollywood Boulevard in front of The Pie Hole restaurant (corner of Hollywood and Vine).

“This is a very special day for me, awards are given every year on those television programs, and every year a new person is named a favorite, however, this award is forever,” says McLean. “This is an honor I get to share with friends, fans, and whoever walks down Hollywood Boulevard.”

Joining in the festivities were Don’s longtime friend “Weird Al” Yankovic, who is a fellow Hollywood Walk of Fame recipient. Yankovic released a parody “The Saga Begins,” that was set to the tune of “American Pie,” which recounted the plot of Star Wars: Episode I – The Phantom Menace, from Obi-Wan Kenobi’s point of view. The song was included on Yankovic’s tenth album, Running With Scissors (1999), and went platinum, selling more than one million copies.

In addition, the award-winning acapella group Home Free, participated in the celebration with a special performance of “American Pie,” all while fans along Hollywood Boulevard couldn’t resist singing along and having a good time. The five-member group recorded the song with McLean in 2020 and subsequently released a music video that won three Telly Awards in 2021.

About Don McLean:
Don McLean is a Grammy award honoree, a Songwriter Hall of Fame member, a BBC Lifetime Achievement Award recipient, a Hollywood Walk of Fame star recipient, and his smash hit “American Pie” resides in the Library of Congress National Recording Registry and was named by the Recording Industry of America (RIAA) a top 5 song of the 20th Century.

A New York native, Don McLean is one of the most revered and respected songwriters in American history. After paying his dues in the New York club scene in the late ‘60s, he went on to score mega-hits like “Vincent (Starry, Starry Night),” “Castles in the Air” and many more. Madonna, Garth Brooks, Josh Groban, Drake, “Weird Al” Yankovic, and countless others have recorded his catalog of songs.

In 2015, McLean’s manuscript of the lyrics to “American Pie” was auctioned by Christies, selling for just over $1.2 Million. 2019 honored Don with a star on the Las Vegas Walkway of Stars and his song “And I Love You So” was the theme for Prince Harry and Megan Markle’s wedding. 2020 brought Don a new recording contract with Time Life which he released a catalog of recordings as well as a new album Still Playin’ Favorites. Now, in 2021 “American Pie” appears in the Avengers’ Black Widow and the upcoming Tom Hanks movie Finch, a children’s book will be released, and much more! And when you think things are slowing down, not so for Don McLean!