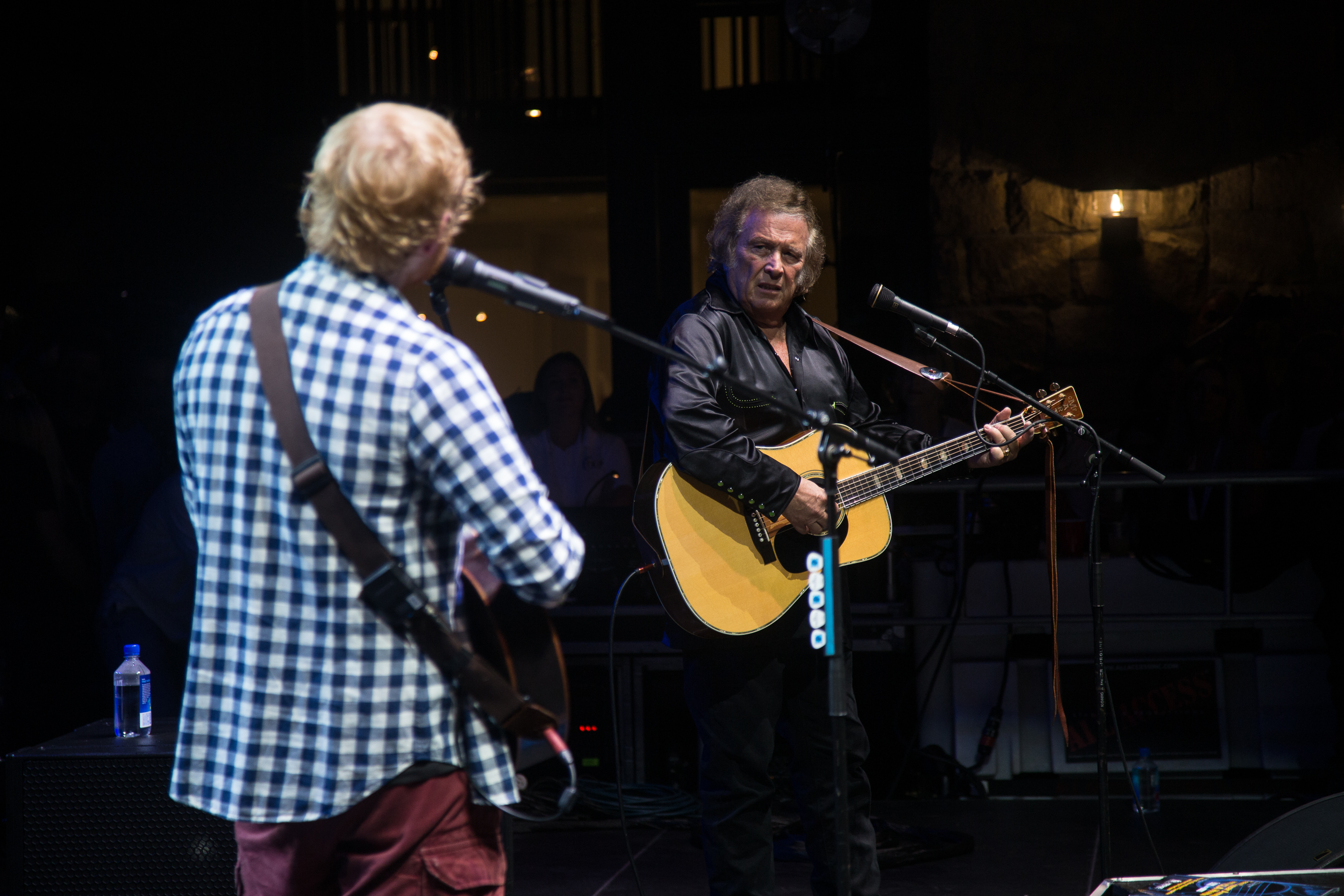 “I have been aware of the philanthropic work of Roger Daltrey for many years, and that motivated me to participate,” said McLean. “I enjoyed all the music very much, and Ed Sheeran is very delightful to know and work with. Van Morrison put on a beautiful, swinging show and his band was very refined. Everyone gave their best, and it was a stellar musical evening that raised money for a good cause.”

The invite-only event, the fifth in a series that began a decade ago to raise awareness and funds for UCLA Health’s Autism program, launched the Daltrey-Townshend Teen and Young Adult Cancer Program at UCLA and spearheaded the establishment of Teen Cancer America.

Judd Apatow served as Master of Ceremonies for the evening and Howie Mandel as auctioneer for the live auction of a rare collection of music memorabilia and art that was auctioned off throughout the evening. Included in the auction lot was a guitar donated by The Buddy Holly Educational Foundation that experts are saying may be the most valuable ever built for a charity event. The handcrafted guitar, inspired by the Holly classic song, “Learning The Game,” is signed by 75 of the greatest living musicians including Eric Clapton, Robert Plant, Brian May, Bruce Springsteen, Don McLean, Donovan, Brian Wilson, Keith Richards, Dion, Peter Frampton, Graham Nash, Don Everly and Elvis Costello, just to name a few. Peter Bradley Jr. of The Buddy Holly Educational Foundation has spent the last 18 months traveling the world capturing the signatures and stories about how Holly inspired other artists, in preparation for donating the guitar to Teen Cancer America as part of a newly established partnership between the two organizations.

Other auction items included a mechanically and electrically refurbished Bally Pinball Wizard Machine built in 1975 to coincide with the release of the movie/rock opera “Tommy.” It was autographed for the event by most of the stars of the film, including Daltrey, Townsend, Elton John, Tina Turner, Jack Nicholson, and Ann-Margret. Additional auction items included a first off the production line, limited edition The Who motorized scooter and high-value art from famed contemporary street-artist RETNA. The auction was being conducted live, and online at www.ha.com, by Heritage Auctions.

The first four Backyard Concert events raised close to $10 million, with event expenses totaling less than 10 percent of the funds raised. Friday’s concert and auction raised over $3.5 Million for the charities.

Backyard Concert continues to build on this momentum to provide transformative care of kids, teens, young adults and families impacted by the frightening diagnosis of cancer or autism. Support from the event funds a multitude of programs, services and resources provided by both UCLA Health and Teen Cancer America for these young patients. If you would like to make a donation in support of this great cause, please contact Carmen Garcia at 310-255-7721.

About UCLA Health:
UCLA Health is among the most comprehensive and advanced health care systems in the world. Together, UCLA Health and the David Geffen School of Medicine at UCLA redefine standards of excellence in health care. Consistently ranked among the best in the nation, UCLA Health is on the cutting edge of biomedical research, and their doctors and scientists do pioneering work across an astounding range of disciplines, from organ transplantation and cardiac surgery to neurosurgery, comprehensive cancer treatment, autism and a multitude of other physical and neuropsychiatric conditions and diseases. Support of this event will provide funding for a number of UCLA Health high-touch patient programs and support services specific to cancer treatment and autism. For more information, visit UCLAHealth.org.

About Teen Cancer America:
Every hour another 13-25 year old is diagnosed with cancer in America. Teen Cancer America transforms the lives for this under-served patient population by working with our country’s leading cancer treatment and research centers. They create specialized clinical care programs, offer therapeutic experiences and provide access to individualized support and resources. This completely unique organization works with the leading healthcare institutions to build state-of-the-art Teen and Young Adult “Social Zones” for both in-patient and out-patient treatment settings. The work of Teen Cancer America has impacted over 5,000 young people and their families nationwide during the last six years. For more information, visit TeenCancerAmerica.org.