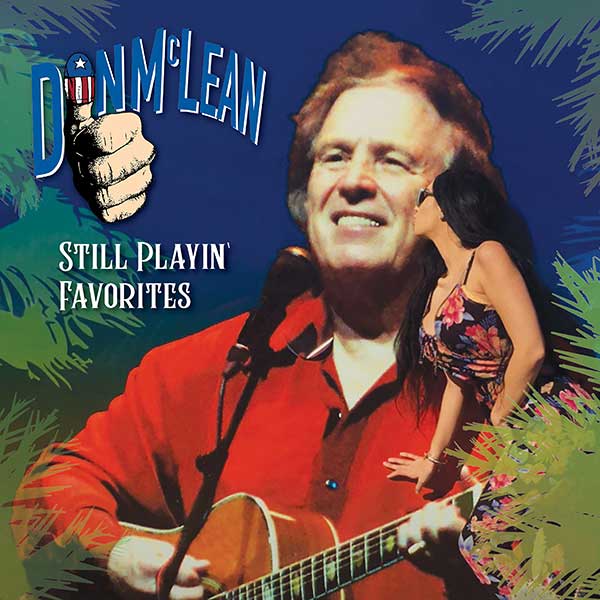 A follow-up to his 1973 covers album ‘Playin’ Favorites’, this new collection digs deep into the roots of American music and adds a rock and roll edge to country, folk, gospel, bluegrass, blues, jazz, and soul gems

FAIRFAX, Va. – Don McLean pays homage to American music with his new covers album, Still Playin’ Favorites, released today through Time Life. Spanning more than 100 years of songwriting, McLean assembled a treasury of music from country, folk, gospel, bluegrass, blues, jazz and soul for the album, performing them with a rock and roll twist. Don discusses several of the tracks in a new video series on his YouTube channel, including “Backwater Blues,” originally recorded by Bessie Smith in 1927.

“I just love writing songs and I love hearing songs by good writers that make sense and have lyrics that say something and that are pretty simple,” Don explains about the concept behind the album. “My version is just a little bit more rock and roll, a little harder-edged, with drums and double guitars,” he goes on to say about the classic blues and jazz song, “Backwater Blues.” When it came to recording “Got The Bull By The Horns,” originally performed by Johnny Horton, “I changed a few of the words, I hope he won’t mind,” McLean admits good-naturedly. The collection also features songs made famous by Johnny Cash, Bob Dylan, Clyde Moody, Mel Tillis, Ray Charles, Mahalia Jackson, Elvis Presley, and more.

Still Playin’ Favorites is modeled after his first album of cover songs, Playin’ Favorites, a remarkable artistic statement for a young songwriter to release on the heels of his masterworks “American Pie” and “Vincent.” The new album extends his original tribute to the great songwriters who have helped shape American music and, in turn, McLean’s work.

About Don McLean:
Don McLean is a Grammy award honoree, a Songwriter Hall of Fame member, a BBC Lifetime Achievement Award recipient, and his smash hit “American Pie” resides in the Library of Congress National Recording Registry and was named by the Recording Industry of America (RIAA) a top 5 song of the 20th Century. A New York native, Don McLean is one of the most revered and respected songwriters in American history. After paying his dues in the New York club scene in the late ‘60s, he went on to score mega-hits like “Vincent (Starry, Starry Night),” “Castles in the Air” and many more. His catalog of songs has been recorded by Madonna, Garth Brooks, Josh Groban, Drake, Weird “Al” Yankovic, and countless others. In 2015, one of McLean’s four handwritten manuscripts of the lyrics to “American Pie” was auctioned by Christies, selling for just over $1.2 Million. 2019 honored Don with a star on the Las Vegas Walkway of Stars and his song “And I Love You So” was the theme for Prince Harry and Megan Markle’s wedding. Now in 2020, Don signed a recording contract with Time Life to release his catalog of recordings as well as the highly anticipated new album Still Playin’ Favorites, releasing October 23rd. “American Pie” will be featured in the Avengers Black Widow and the Tom Hanks movie BIOS and much more to be announced. And when you think things are slowing down, not so for Don McLean! 2021 will mark the 50th anniversary of American Pie with a world tour to follow.