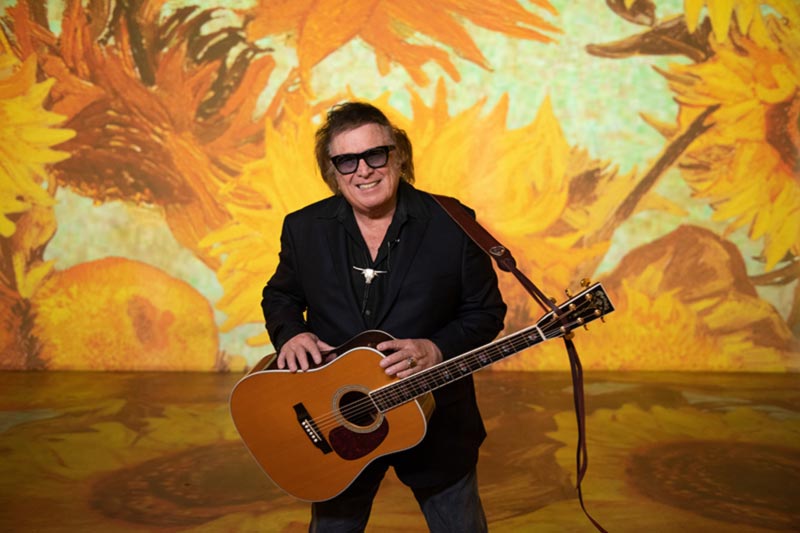 LOS ANGELES – In collaboration with Immersive Van Gogh and the International Society for Bipolar Disorders (ISBD), folk-rock legend Don McLean released a new music video today of his song “Vincent,” also known as “Starry, Starry Night.” The video was recorded at Immersive Van Gogh Los Angeles and was released in commemoration of Van Gogh’s birthday and World Bipolar Day on Wednesday, March 30. Visit immersivevangogh.com/don to view the video. Viewers are encouraged to make a donation to support the ISBD; anyone making a donation of $40 or more will receive a two-for-one coupon code (valid through April 30) to visit Immersive Van Gogh in any of the 14 cities where it is currently being presented. To make a donation to the ISBD, click here.

The video was also premiered by American SongwriterHERE, with McLean sharing his backstory on the creation of and inspiration for “Vincent”.

Van Gogh, born March 30, 1853, is widely thought to have struggled with bipolar disorder or other mental illness, and tragically took his own life in 1890. World Bipolar Day, recognized annually on March 30, is a worldwide awareness initiative that provides a platform for education and discussion. The video release also commemorates the 50th anniversary of the song’s rise to No. 2 on Billboard Charts in March of 1972.

“I am excited to release this video in collaboration with Immersive Van Gogh and the International Society for Bipolar Disorders,” says McLean. “Van Gogh himself struggled with mental health, and by launching this video, we hope to support mental health awareness as a tribute to Van Gogh on his birthday. This is an especially meaningful way for me to commemorate the 50th anniversary of a song that so many people have told me has a special personal resonance for them.”

“Don McLean’s song is truly a classic,” added Immersive Van Gogh producer Corey Ross. “We are grateful for the opportunity to bring wider awareness and understanding about bipolar disorders thanks to this collaboration.”

“Approximately 2% of the general population has bipolar disorder, formerly known as manic-depressive illness, and it affects women and men equally of all ages,” states President of the International Society for Bipolar Disorders Professor Gin Malhi. “We are delighted to partner with Immersive Van Gogh through this initiative that celebrates both Van Gogh’s birthday and World Bipolar Day, to raise awareness of this illness and the important work of our organization and its members.”

About Don McLean:
Don McLean is a Grammy award honoree, a Songwriter Hall of Fame member, a BBC Lifetime Achievement Award recipient, and his smash hit “American Pie” resides in the Library of Congress National Recording Registry and was named a top 5 song of the 20th Century by the Recording Industry of America (RIAA). A New York native, Don McLean is one of the most revered and respected songwriters in American history. After paying his dues in the New York club scene in the late ‘60s, he went on to score mega-hits like “Vincent (Starry, Starry Night),” “Castles in the Air” and many more. His catalog of songs has been recorded by Madonna, Garth Brooks, Josh Groban, Drake, “Weird Al” Yankovic, and countless others. In 2015, McLean’s handwritten manuscript of the lyrics to “American Pie” was auctioned by Christies, selling for just over $1.2 Million. 2019 honored Don with a star on the Las Vegas Walkway of Stars and his song “And I Love You So” was the theme for Prince Harry and Megan Markle’s wedding. Don landed a new recording contract with Time Life in 2020, with whom he released a catalog of recordings as well as a new album Still Playin’ Favorites. 2021 brought Don’s “American Pie” features in the Avengers’ Black Widow and the new Tom Hanks movie Finch. Don received a star on the Hollywood Walk of Fame, celebrated the 50th anniversary of “American Pie,” recorded a version of the song with a cappella group Home Free, a children’s book has been written, and much more! And when you think things are slowing down, not so for Don McLean!

The ISBD has members from over 50 countries, and over the past two decades has become the leading source for emerging research in the field of bipolar disorders. Indeed, it is the only nonprofit bipolar-focused, research-oriented society worldwide, and is providing meaningful information to patients, families, and other mental health professionals working on the front lines.

World Bipolar Day (WBD) is a unique initiative that was launched by ISBD in 2014. It has been immensely successful and has raised worldwide recognition of the issues that patients with bipolar disorder face. This year will mark the ninth celebration of World Bipolar Day.

In the last year, the Canadian company has announced or opened new galleries in 21 U.S. cities including Chicago, Dallas, Houston, Las Vegas, Los Angeles, New York City, and Orlando. To date, Lighthouse Immersive has sold over 4.8 million tickets to Immersive Van Gogh across North America, with Artnet recently commenting on the wave of immersive galleries, calling it “one of the largest coordinated art phenomena of all time.”