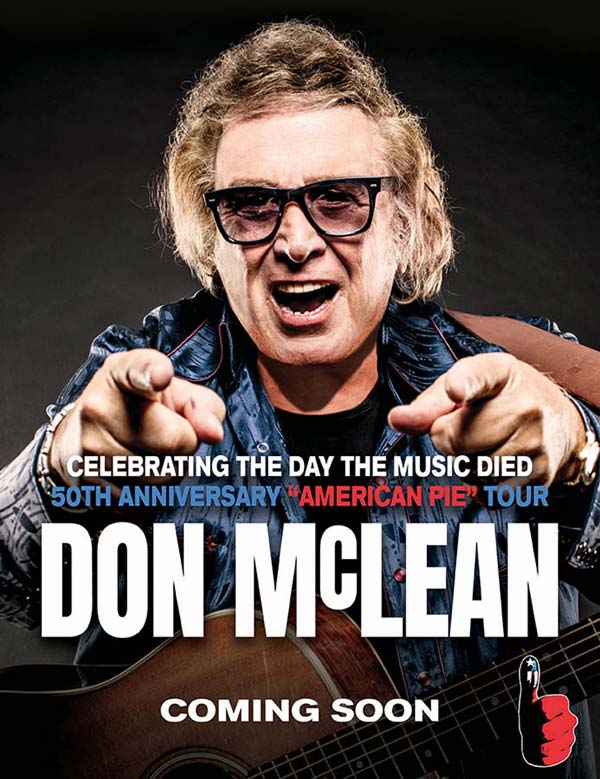 CLEAR LAKE, Iowa – Legendary singer/songwriter Don McLean released his iconic album American Pie in 1971, and now 50 years later will perform at the Surf Ballroom in Clear Lake, Iowa, on “The Day The Music Died,” February 3, 2021. This historic night will honor Ritchie Valens, Buddy Holly, and ‘The Big Bopper’ as it marks the 62nd anniversary of the 1959 plane crash that killed the American rock ‘n’ roll musicians. In addition, it will officially kick-off the American Pie 50th Anniversary World Tour, which will take McLean to Australia, New Zealand, England, Ireland, and many more places to be announced soon!

Most can recite McLean’s hit single “American Pie” by heart, but not all know the meaning behind the song. This fatal day is known as the “The Day the Music Died” coined by McLean’s 1971 hit “American Pie,” written to honor the legacies of the early rock legends who lost their lives in the tragic plane crash.

“February 3, 1959 was a tragic day for all of us who lost our heroes in that plane crash. While writing “American Pie,” I felt it was important to remember this incident that to me, was still fresh,” shares McLean. “Now, we will return to the last venue they performed at on the anniversary of the crash to kick off the 50th Anniversary American Pie World Tour.”

About Don McLean:
Don McLean is a Grammy award honoree, a Songwriter Hall of Fame member, a BBC Lifetime Achievement Award recipient, and his smash hit “American Pie” resides in the Library of Congress National Recording Registry and was named by the Recording Industry of America (RIAA) a top 5 song of the 20th Century. A New York native, Don McLean is one of the most revered and respected songwriters in American history. After paying his dues in the New York club scene in the late ‘60s, he went on to score mega-hits like “Vincent (Starry, Starry Night),” “Castles in the Air” and many more. His catalog of songs has been recorded by Madonna, Garth Brooks, Josh Groban, Drake, Weird “Al” Yankovic, and countless others. In 2015, one of McLean’s four handwritten manuscripts of the lyrics to “American Pie” was auctioned by Christies, selling for just over $1.2 Million. 2019 honored Don with a star on the Las Vegas Walkway of Stars and his song “And I Love You So” was the theme for Prince Harry and Megan Markle’s wedding. Now in 2020, Don signed a recording contract with Time Life to release his catalog of recordings as well as the highly anticipated new album Still Playin’ Favorites, was released October 23rd. “American Pie” will be featured in the Avengers Black Widow and the Tom Hanks movie BIOS and much more to be announced. And when you think things are slowing down, not so for Don McLean! 2021 will mark the 50th anniversary of American Pie with a world tour to follow.