Tune In Alert: Don McLean To Appear On Episode Of The Song – Recorded Live At TGL Farms, Featuring His Hit Songs In 30 Minute Show On AXS-TV 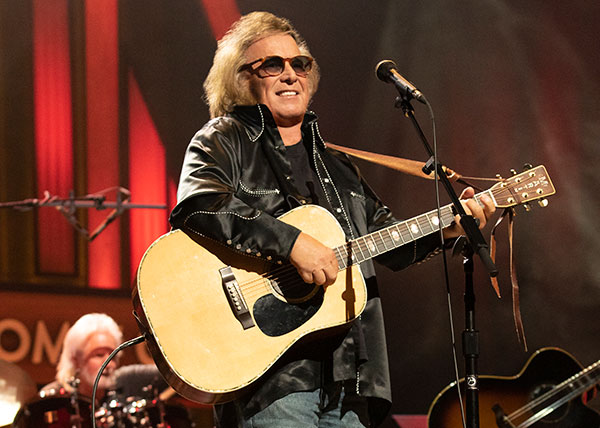 NASHVILLE, Tenn. – Don McLean is a Grammy award honoree, a Songwriters Hall of Fame member, a BBC Lifetime Achievement Award recipient, and his smash hit “American Pie” resides in the Library of Congress National Recording Registry and was named by the Recording Industry of America (RIAA) as a top 5 song of the 20th Century. His creative works “Castles In The Air,” “Vincent,” and “American Pie” will be the focus of a full episode of The Song – Recorded Live @ TGL Farms television show that will air August 27 at 8:30/7:30c on AXS-TV.

“I have been really blessed to have written songs that turned into hit records and propelled my career throughout the years as well as have other artists like Madonna, Garth Brooks, Josh Groban, Drake, Weird “Al” Yankovic, and countless others record them,” says Don McLean. “A good song will last a lifetime!”

Don McLean recently announced plans for a feature documentary, ‘The Day The Music Died: The Story Behind Don McLean’s American Pie,’ set for release at the end of 2021. The project will also inform a new stage play that will revolve around McLean’s deep catalog (which includes “Vincent,” “Castles in the Air” and “Wonderful Baby”), as well as a children’s book based on his most famous song.

McLean Joins Studio 10 in Australia for an in-depth exclusive interview
McLean connected with Studio 10 in Australia recently to discuss the creation and meaning of “American Pie” as we approach the 50th Anniversary of the song and album release. They reflect on the cryptic references in the song, how it correlated to the events of the era, and McLean’s own upbringing, and how the song continues to impact the world today. They also discussed the sadness, pain, and loss culminating in the creation of “Vincent (Starry, Starry Night)”, where McLean began writing the lyrics on his green pages. The song is also included on the breakthrough album recorded nearly fifty years ago. Covered by Perry Como, Elvis, Helen Reddy, Josh Groban, Bon Jovi, global boxing sensation Tyson Fury and many more, Don McLean’s permeating songcraft is truly timeless. 2021 will welcome the 50th Anniversary American Pie Don McLean tour to three continents. Watch the full, exclusive interview: https://youtu.be/vwRuInx6fSU.

About Don McLean:
Don McLean is a Grammy award honoree, a Songwriter Hall of Fame member, a BBC Lifetime Achievement award recipient, and his smash hit “American Pie” resides in the Library of Congress National Recording Registry and was named by the Recording Industry of America (RIAA) a top 5 song of the 20th Century. A New York native, Don McLean is one of the most revered and respected songwriters in American history. After paying his dues in the New York club scene in the late ‘60s, he went on to score mega-hits like “Vincent (Starry, Starry Night),” “Castles in the Air” and many more. His catalog of songs has been recorded by Madonna, Garth Brooks, Josh Groban, Drake, Weird “Al” Yankovic, and countless others. In 2015, one of McLean’s four handwritten manuscripts of the lyrics to “American Pie” was auctioned by Christies, selling for just over $1.2 Million. 2019 honored Don with a star on the Las Vegas Walkway of Stars and his song “And I Love You So” was the theme for Prince Harry and Megan Markle’s wedding. Now in 2020, Don signed a recording contract with Time Life to release his catalog of recordings as well as the much anticipated new album Still Playin’ Favorites, which will be released in the Fall. “American Pie” will be featured in the Avengers Black Widow and the Tom Hanks movie BIOS and much more to be announced. And when you think things are slowing down, not so for Don McLean! 2021 will mark the 50th anniversary of American Pie with a World Tour to follo

About AXS TV:
Launched in July 2012 by visionary entrepreneur CEO Mark Cuban, AXS TV delivers the ultimate in music entertainment programming with an eclectic lineup that includes classic concerts from music’s most iconic bands, as well as exclusive music festival coverage, original hit series, docs that rock, insightful specials, and knock-out live mixed martial arts action. AXS TV is a partnership between Cuban, AEG, Ryan Seacrest Media, Creative Artists Agency (CAA), and CBS. The network is available nationally in the United States and can be seen in parts of Canada, Mexico, and the Caribbean. For a list of providers, visit axs.tv/subscribe. For more information, see www.axs.tv and www.axs.tv/press. Follow AXS TV on Facebook, Twitter @axstv; Instagram; and YouTube. Press information is available at axstvmediacenter.com.

Suggested Tweet:
.@DonMcLean to appear on #TheSong this Thursday at 8:30/7:30c on AXS TV! Find @AXSTV on your TV: axs.tv/subscribe