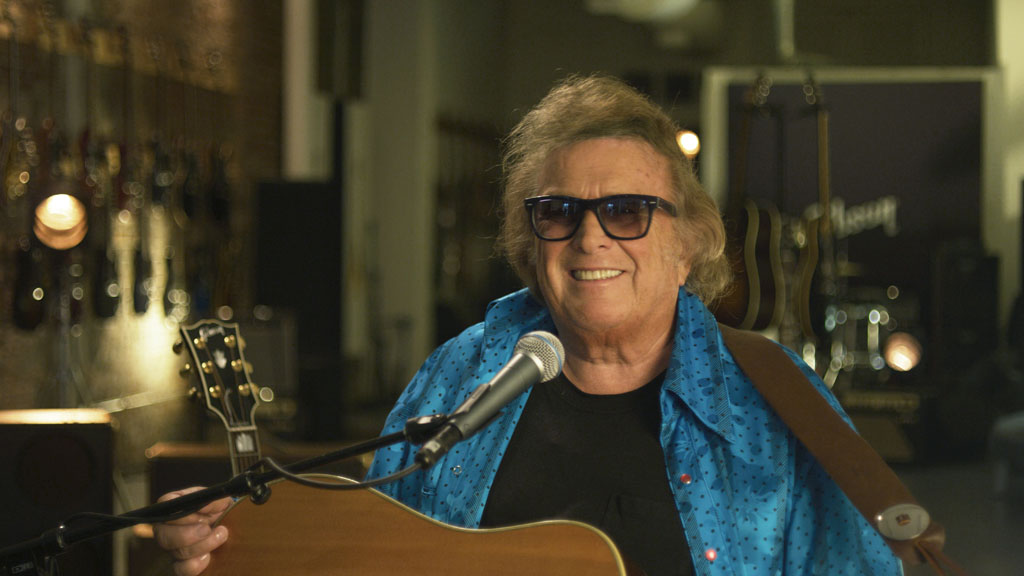 McLean, who appears on the Oct. 3 episode, recalls the genius of Buddy Holly, and delivers a soulful performance of his signature hit “American Pie”

The series will also be available as a podcast on Spotify, featuring additional commentary and each guest’s complete playlist

The eight-episode season puts the spotlight on a different rock icon each week as they sit down to discuss their favorite songs of all time—sharing their own personal mixtape playlist of meaningful music that shaped their lives and left an enduring impact on their legendary careers. In addition to the AXS TV series, MIXTAPE will be available as a podcast on Spotify, giving fans access to additional commentary, as well as each guest’s complete music playlist. AXS TV and Spotify will collaborate on promotion across the series, podcast and playlists.

Filmed in the landmark Gibson Guitar Showroom in Hollywood, MIXTAPE takes viewers on an intimate journey through the lives and legacies of some of rock’s most iconic figures, as told in their own words. In a candid interview format, guests tell the story of their lives through the songs that they love, building their personal lifetime MIXTAPE fueled by artists and bands from all music genres of the next generation of stars. Packed with surprise appearances and impromptu, unplugged performances of special songs they love, MIXTAPE is the ultimate classic rock experience that music lovers of all ages will not want to miss.

The inaugural season boasts an all-star roster of rock trailblazers, kicking off on September 12 with Foreigner founder, songwriter and guitarist Mick Jones, who shares priceless anecdotes about spending time with The Beatles in France just before the band embarked on their landmark tour of America. Jones is joined by Foreigner vocalist Kelly Hansen, who discusses singing “I Can See Clearly Now” with reggae pioneer Johnny Nash, and opens up about joining Foreigner in 2005 and his unwavering commitment to doing the band’s songs justice for the fans who grew up loving them.

Other highlights include REO Speedwagon frontman Kevin Cronin, who reflects on how The Beatles’ groundbreaking performance on The Ed Sullivan Show drove him to a career in rock, and performs REO Speedwagon’s unforgettable hit “Keep Pushin’” with bandmate Dave Amato (Sept. 19); chart-topping rocker Rick Springfield, who explains how The Rolling Stones inspired him to collect obscure rock albums (Sept. 26); a former Eagles guitarist Don Felder, who recounts seeing Elvis Presley on The Ed Sullivan Show for the first time (Oct. 10); and The Doors guitarist Robby Krieger, who performs a rockin’ rendition of “Don’t Be Cruel” with fan-favorite actor and musician Dennis Quaid (Oct. 17); as well as multi-talented singer, songwriter, and musician Todd Rundgren (Oct. 24); and more.

“AXS TV is proud to bring MIXTAPE to our passionate audience of classic rock connoisseurs,” said Evan Haiman, Vice President of Music Programming and Production, AXS TV. “The series is the perfect complement to our music programming lineup—spanning across an eclectic array of eras and genres, and putting the spotlight on some of rock’s most influential artists as they reflect on those larger-than-life rock n’ roll heroes who inspired and influenced them. This is a unique opportunity for rock enthusiasts to experience their favorite rock stars’ favorite songs firsthand, and I’m confident our audience is going to enjoy it.”

“MIXTAPE is an up close and inspiring journey of the lives of these dynamic rock icons told through the music that they love. Fans will be delighted and intrigued by what is on their personal MIXTAPE playlists,” said Natalie Barandes, Executive Producer, Joy Factory.

MIXTAPE is produced by Joy Factory with Barandes as executive producer, in collaboration with Haiman of AXS TV. Joy Factory is a creative content studio in Los Angeles.

About AXS TV:
Launched in 2012 by visionary entrepreneur CEO Mark Cuban in conjunction with AEG, Ryan Seacrest Media, Creative Artists Agency (CAA), and CBS, AXS TV has established itself as the premier destination for music and entertainment programming. The network delivers an eclectic programming roster that includes original series such as The Big Interview With Dan Rather, Rock & Roll Road Trip With Sammy Hagar, and Real Money, as well as hard-hitting mixed martial arts events, and a slate of acclaimed documentaries and iconic concerts from some of music’s most influential artists. AXS TV is also the U.S. home of the popular New Japan Pro Wrestling and WOW-Women Of Wrestling promotions and Legacy Fighting Alliance (LFA). AXS TV is currently available nationally in the United States and parts of Canada, Mexico, and the Caribbean. For a list of providers, visit axs.tv/subscribe. For more information, see www.axs.tv. Follow AXS TV on Facebook,Twitter @axstv; Instagram; and YouTube. Press information is available at axstvmediacenter.com.