Don McLean To Be The Focus Of The Big Interview With Dan Rather, Premiering Wednesday, May 20th At 9pm ET / 6pm PT On AXS TV 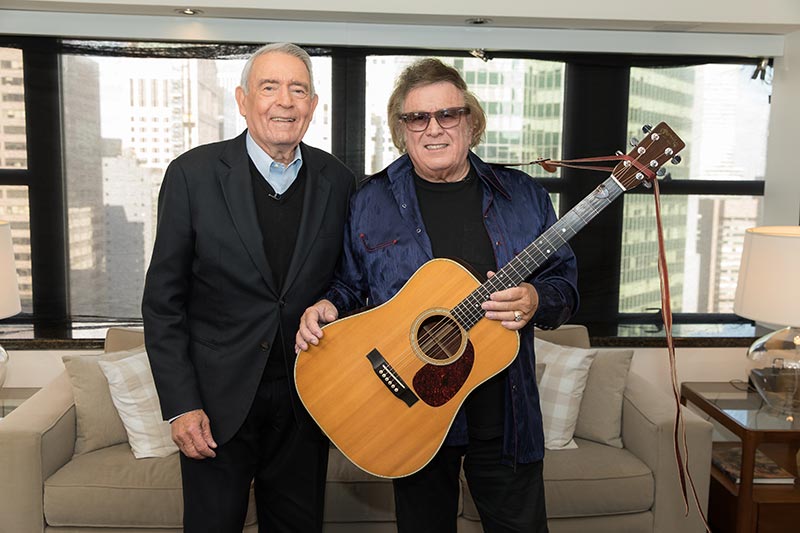 NEW YORK, N.Y. – Songwriter Hall of Fame member and BBC Lifetime Achievement Award recipient Don McLean joins Dan Rather for a special evening, opening up about what has shaped and defined him as an artist, fellow superstar influences, and the making of Recording Industry of America (RIAA) top 5 song of the 20th Century “American Pie,” in this exclusive look at an all-new episode of The Big Interview—airing Wednesday, May 20 at 9pm ET / 6pm PT.

In this fascinating interview McLean shares where the journey began. He was just 15 years old when his father died and by that time his musical focus was already folk in part, drawing inspiration from The Weavers landmark 1955 recording Live at Carnegie Hall. McLean was determined to become a professional musician and singer and, as a 16-year-old, he was already making contacts in the business. After managing to get his home number from the telephone directory, Don phoned Erik Darling who recorded his first studio sessions with Lisa Kindred.

After college shows and apprenticeships, in 1969, Don recorded his first album, Tapestry, in Berkeley, California. The student riots were going on outside the studio door as Don was singing “And I Love You So” inside. The album was first released by Mediarts and attracted good reviews and achieved some commercial success.

“Dan Rather was incredible! I have never been interviewed by anyone that was so educated and knowledgeable about my career than Dan was. He asked me things far beyond the typical questions you get when doing interviews. What a gentleman and very thought out person,” says Don McLean.

The transition to international stardom began in 1971 with the release of “American Pie”. This breakthrough single was recorded on May 26th, 1971 and a month later received its first radio airplay on New York’s WNEW-FM and WPLJ-FM to mark the closing of The Fillmore East, the famous New York concert hall. McLean dives into his rise to stardom and what lies behind the making of a hit that lives on for decades in The Big Interview. Don shares treasured information with Dan Rather that will pique the interest and inspire the hearts of viewers.

About Don McLean:
Don McLean is a Grammy award honoree, a Songwriter Hall of Fame member, a BBC Lifetime Achievement award recipient, and his smash hit “American Pie” resides in the Library of Congress National Recording Registry and was named by the Recording Industry of America (RIAA) a top 5 song of the 20th Century. A New York native, Don McLean is one of the most revered and respected songwriters in American history. After paying his dues in the New York club scene in the late ‘60s, he went on to score mega-hits like “Vincent (Starry, Starry Night),” “Castles in the Air” and many more. His catalog of songs have been recorded by Madonna, Garth Brooks, Josh Groban, Drake, Weird “Al” Yankovic, and countless others. In 2015, one of McLean’s four handwritten manuscripts of the lyrics to “American Pie” was auctioned by Christies, selling for just over $1.2 Million. 2019 honored Don with a star on the Las Vegas Walkway of Stars and his song “And I Love You So” was the theme for Prince Harry and Megan Markle’s wedding. Now in 2020, Don signed a recording contract with Time Life/Warner Bros. Records to release his catalog of recordings as well as the much anticipated new album Still Playin’ Favorites, which will be released in the Fall. “American Pie” will be featured in the Avengers Black Widow and the Tom Hanks movie BIOS and much more to be announced. And when you think things are slowing down, not so for Don McLean! 2021 will mark the 50th anniversary of American Pie with a World Tour to follow.

About AXS TV:
Launched in July 2012 by visionary entrepreneur CEO Mark Cuban, AXS TV delivers the ultimate in music entertainment programming with an eclectic lineup that includes classic concerts from music’s most iconic bands, as well as exclusive music festival coverage, original hit series, docs that rock, insightful specials, and knock-out live mixed martial arts action. AXS TV is a partnership between Cuban, AEG, Ryan Seacrest Media, Creative Artists Agency (CAA) and CBS. The network is available nationally in the United States and can be seen in parts of Canada, Mexico and the Caribbean. For a list of providers, visit axs.tv/subscribe. For more information, see www.axs.tv and www.axs.tv/press. Follow AXS TV on Facebook,Twitter @axstv; Instagram; and YouTube. Press information is available at axstvmediacenter.com.

Suggested Tweet:
.@DonMcCleanOnline to appear on #TheBigInterview with @DanRather, premiering Wednesday, May 20 at 9pm ET / 6pm PT on @AXSTV