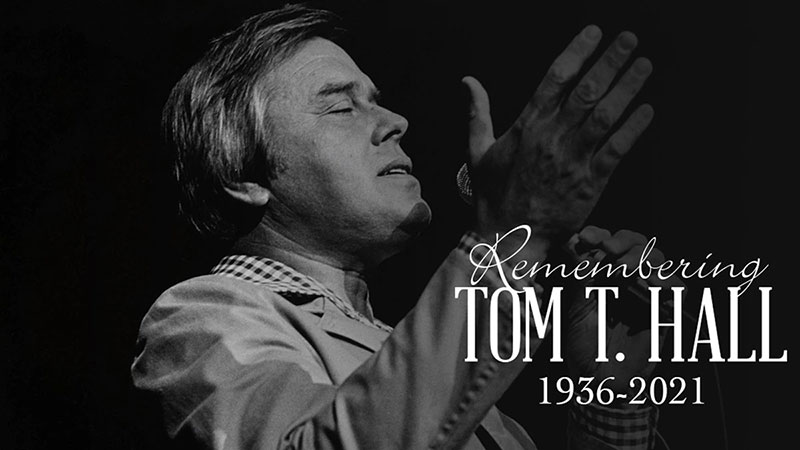 NASHVILLE, Tenn. – Country Music Hall of Fame legend Tom T. Hall died on Friday, August 20th. He was 85. Hall was nicknamed “The Storyteller” by Tex Ritter, another country great, for his songwriting style. His hits included “Harper Valley P.T.A.” which became a major crossover smash for Jeanie C. Riley in 1968, “That’s How I Got To Memphis,”, Homecoming,” “(Old Dogs, Children, and) Watermelon Wine,” “A Week in a Country Jail,” “I Love,” “Country Is”, “I Care,” and many more. His songs have been recorded by the likes of Johnny Cash, Alan Jackson, Waylon Jennings, George Jones, and Loretta Lynn. Hall was inducted into the Country Music Hall of Fame in 2008 and was a Grand Ole Opry member since 1971. Rolling Stone included the Olive Hill, Kentucky native on their ‘100 Greatest Songwriters’ list.

“I worked with Tom on several occasions, and he was always a gentleman. He was a very interesting songwriter and a fun person to be around. He contributed a great deal to country music and he got to live a full life.” – Don McLean

“Back in 1978 when we sang at Mama Maybelle Carter’s funeral a saddened and shaken Johnny Cash walked up to the podium and asked Tom T. Hall to stand with him… Johnny said, “I draw strength from you, Tom!” Thank you Tom T. Hall for the songs and the strength you provided to so many … Rest Easy now and draw strength from the loving arms of Jesus… until the day.” – Joe Bonsall, The Oak Ridge Boys

“TOM T. HALL WAS A ONE-OF-A-KIND HUMAN BEING. HE LEFT US WITH A BODY OF SONGS THE LIKES OF WHICH WE WRITERS CAN ONLY DREAM OF. HIS RECORDS WERE HITS. A SUCCESSFUL AUTHOR, HIS BOOKS WERE ALWAYS A FUN READ. HE MADE US LAUGH AND CRY. HE WAS A HALL OF FAMER AND WILL BE DEEPLY MISSED. THAT IS THE MARK OF TRUE GREATNESS. REST EASY, OLD STORYTELLER.” – T. Graham Brown

“Tom T. Hall made a great impact in country music and beyond, with the social messages written in his songs, such as “Harper Valley P.T.A.”, a huge hit for Jeanie C. Riley . . . I just visited with her at a show I did in Carthage, Texas and it brought back great memories of that era and time in my life. Greatly missed, and loved.” – Janie Fricke

“I loved him – he was always so kind and good to me – and so complimentary – when I was first in Nashville and he heard me sing, he said he thought I must be the reincarnation of Hank Williams – what a lovely thing to say. I will miss him.” – Lacy J. Dalton

“The one thing I could always count on when doing shows with Tom T was that there would be laughter. His incredible poetic writing talent and storytelling genius will for sure be deeply missed. He truly was one of our industry’s great treasures.” – T.G. Sheppard

“I grew up listening to Tom T. Hall on the radio or being covered in the Oprys of Texas. He is and will always be a Legend. Never forgotten. We will miss you, Mr. Hall. Sending all my love and prayers to his family in this time.” – Mary Sarah

“Tom T. Hall loved honest, open smiles, kisses from a child, tomatoes on the vine, and onions. He was the quintessential artist who painted life’s portrait with an economy of words, a storyteller with a philosopher’s wisdom, and a poet with the common man’s heart. I remember one glorious day at Fox Hollow with Tom and Miss Dixie–sitting around their kitchen table sharing stories–hoping that in some crazy way I would absorb even an ounce of his genius. He pulled out an old guitar that day and began to sing “The Homecoming.” I was spellbound as he wove his tale of a country music singer standing on his father’s doorstep after years on the road. There’s a sadness at the finality of Tom’s road days coming to an abrupt end, but peace in the fact that he is home for good now still loving winners when they cry, loser’s when they try, music when it’s good, and life.” – Tim Atwood

“What a sad day in country music. We’ve yet again lost another legend. Truly an icon to so many in this business. Gone but will never be forgotten. RIP Tom T. Hall. Prayers sent!” – Shane Owens

“Frizzell and West enjoyed being the guests on the TV Show “Pop Goes The Country” with Tom T. Hall as host. We had a great time. ‘Say Hello To Heaven’, Tom T.” – David Frizzell

“I’m shocked and saddened to hear the tragic passing of fellow Kentuckian Tom T Hall! One of the pioneers of songwriting and a hall of famer that was known everywhere. Country music has lost one of the good ones. Prayers to the family.” – JD Shelburne

“I recorded this back in 1999. [ listen ] It was a Tom T. Hall tribute by his favorite bluegrass singer Charlie Sizemore. It is one of my all-time favorite projects to ever work on. Tom T. and Dixie were with us every step of the way, and he was grinning from ear to ear the day we had The Oak Ridge Boys come in to add their signature sound to his classic composition “Me And Jesus.” Duane Allen is my father-in-law, and I know how important great songs are to him, so it was an easy task getting them to come in and sing on a song written by ‘The Storyteller’.

There was so much fun and laughter in the studio that day. I have always believed that type of environment is what creates the best chances of capturing special moments. In my view, I believe we achieved our goal.” – Paul Martin, Rockland Road