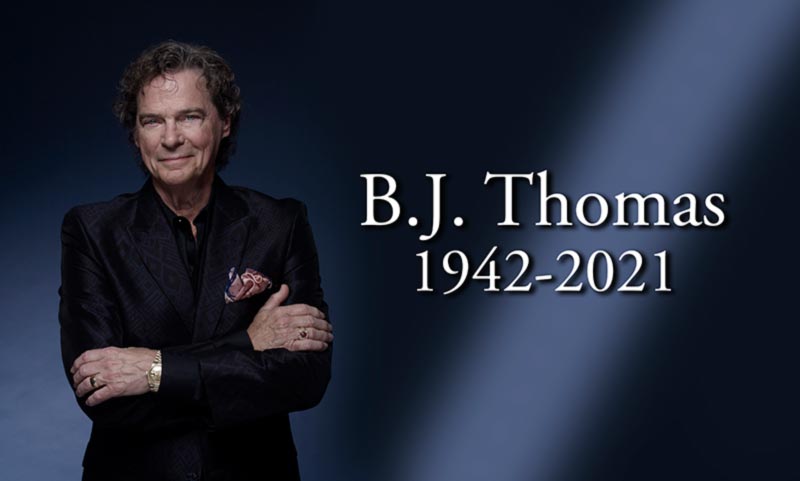 NASHVILLE, Tenn. – Few artists have left a more indelible mark on America’s musical landscape than B.J. Thomas. With his smooth, rich voice and unerring song sense, Thomas’s expansive career crossed multiple genres, including country, pop, and gospel, earning him CMA, Dove, and Grammy awards and nominations since his emergence in the 1960s.

Thomas’ career was anchored by numerous enduring hits, among them his million-selling cover of Hank Williams’ “I’m So Lonesome I Could Cry,” the Grammy-winning “(Hey Won’t You Play) Another Somebody Done Somebody Wrong Song” and the iconic “Raindrops Keep Fallin’ on My Head,” which won the Academy Award for best original song. A five-time Grammy award winner and Grammy Hall of Fame inductee, Thomas has sold over 70 million albums worldwide, scoring eight No. 1 hits and 26 Top 10 singles over his 50+ years in the music industry. His lengthy chart history led to him being named one of Billboard’s Top 50 Most Played Artists Over The Past 50 Years. Such memorable hits as “I Just Can’t Help Believing, “Don’t Worry Baby,” “Whatever Happened To Old Fashioned Love,” “New Looks From An Old Lover” and “Hooked on a Feeling” have made him a staple on multiple radio formats over the years.

Fellow artists mourn the loss of their friend and share fond memories that have left them forever inspired by the timeless, B.J. Thomas.

“One of the signs of true greatness in any of the arts is instant recognition of the creator. When you heard B.J. Thomas sing there was never a doubt who it was. RIP. Gone too soon but I will always know that voice.” – Paul Stanley

“My sincere condolences to the family of one of my favorite duet partners, B.J. Thomas. I will miss him as I know so many others will as well. Rest In Peace my friend.“ – Dionne Warwick

“So sad to hear ofB.J. Thomas’ passing today. I was in touch with him three weeks ago and he seemed ready to fight his diagnosis. He was a kind and elegant gentleman and I will miss him, and his amazing voice. My love to his family.” – Richard Marx

“One of the greatest voices in pop music. My privilege to have B.J. Thomas on my show and play music with him. Gracious, humble, & his voice a remarkable gift from God. Condolences to his family.” – Gov. Mike Huckabee

“While we were working in Las Vegas, and B.J. was opening for us, we spent almost every night in each other’s room. We both had Texas roots, similar beliefs, and we loved finding and playing new songs to each other. The first time we met, we both talked over each other. It was just crazy. We had so much to say to each other that we were almost talking at the same time and it just became funny to both of us. We had so much fun together, getting to know each other in such a short time. Every time I saw him, we just picked up where we left off. I guess it will be that way in Heaven.” – Duane Allen, The Oak Ridge Boys

“The Oak Ridge Boys are devastated by the loss of a friend and a brother and one of the greatest voices to ever sing a song!!! As a young man B.J.’s biography and song called ‘Home Where I Belong,’ and his testimony of how Jesus Christ changed his life meant the world to me. A few years ago I shared that with him late one night over pizza on the Country Music Cruise. We cried and prayed together. I loved B.J. Thomas. There’s a Brand New Star up in Heaven tonight and we will miss you, man. Until the Promised Day.” – Joe Bonsall, The Oak Ridge Boys

“The longer I live, the more I think the real measure of a performer is not being great at the very height of their success, but rather at every weekday state fair gig, corporate date, or casino gig. #BJThomas was one of those greats.” – David Wild

“I was a huge fan of B.J. and his wonderful voice before I started recording, so I loved getting to know him when we were both having hits on United Artist Records early in my career. With all his great songs and career success, B.J. was always so nice and humble. It’s hard to say goodbye to an old friend. My heart is with Gloria and all of B.J.’s family.”– Crystal Gayle

“I’m really sorry to hear of the passing of B.J.Thomas. I hope he had a good life. I remember all the girls loved him.” – Don McLean

“When I say B.J. Thomas and I go way back, I’m not exaggerating. We met in 1962, back when we both had a lot of hair on our heads and faces! I got him his first major record deal on Scepter Records and we worked together on every one of his albums for the next decade. We had tremendous success together. He was a brother to me and I will forever cherish all of the life experiences we shared, including our re-recording of Rock and Roll Lullaby together just a few years ago.” – Steve Tyrell

“I will always remember BJ Thomas as a special man, my friend, and a peer I’d known for decades. BJ had an enormously warm heart and a huge talent to match.” – Sam Moore

“B.J. Thomas not only had a great voice, but he was right for his time in the movie, Butch Cassidy and the Sundance Kid with the song ‘Raindrops Keep Fallin’ On My Head’ which was perfect for his career. I knew him personally and he was a wonderful human being. He will be sadly missed.” – Lee Greenwood

“I can’t believe that another great voice has gone silent. One of the reasons I became a singer was because of B.J. Thomas. It was after hearing his recording of “I’m So Lonesome I Could Cry.” I’m so thankful that our friendship through the years grew into a deep one. To say I’ll miss him is an understatement. My prayers and deepest sympathy go out to Gloria and their family. R.I.P. my dear friend.” – T.G. Sheppard

“Always loved working with B.J. Thomas. Such a unique voice, and always the professional. My sincere condolences to his family.”– Rhonda Vincent

“One of the greatest singers of all time. A true artist and a genuinely nice person. Our company was honored to represent him for a number of years. I’m so sorry to hear this.” – Jim Halsey

“I’m so saddened to hear about B.J., a wonderful talent who made a huge impact on the music business worldwide, crossing over to touch all hearts, in all genres. I’m so lucky to have toured with him in the West, Oregon, Washington, and other states. I will miss him greatly“ – Janie Fricke

“This first song I sang on the first gig I ever had in 1973 was “Raindrops.” I mimicked B.J. the best I could. I tried to sing just like him. He was my hero. I later had the honor to call him my friend and he made a great friend. Sheila and I are heartbroken, but we take comfort knowing that he is out of pain and now gazes upon the face of Jesus. Rest easy, my brother!” – T. Graham Brown

“B.J. Thomas has been a dear friend for many years. My heart is broken. Prayers for his family and wife Gloria. Love ya B.J.” – Johnny Lee

“Like many others, I have been a lifelong fan of B.J. Thomas. His unique vocal style has always soothed my soul. I am so blessed to have gotten to know this kind and gentle man as a precious friend. He was so supportive of others in the music business and always a class act. There will never be anyone that could fill his shoes. Soar high my friend. With you not here, “we’re all so lonesome we could cry” – Kelly Lang

“My dad loved westerns. I remember going to the theater as a family to watch the movie Butch Cassidy & The Sundance Kid. I was still a kid myself, but I vividly remember the now-iconic scene where Paul Newman rode Katharine Ross around the farm on an old bicycle to the tune of this new song called “Raindrops Keep Fallin’ On My Head.” The music was just as much a part of the scene as the visual. The artist didn’t oversing the song. His delivery was playful, and he let the music breathe. I think that was the moment I first became a fan of B.J. Thomas. Years later I performed with B.J. on the TV show Nashville On The Road, then again on TNN’s Nashville Now. I’ll never forget how kind he was. B.J. is part of some of my favorite full-circle memories. The man was a legend and earned his place in our music history books.” – Tim Atwood

“B.J. was a great entertainer – he will be missed” – Lacy J. Dalton

“B.J. Thomas was one of my personal favorites. One of the best singers that’s ever been. I wanted to record every song he ever did because they were great songs and his voice put them over the top. His music will live forever. I’ll miss him ‘Most of all’. Prayers and condolences to his wife and family.” – Doug Stone

“I loved and admired B.J. Thomas and his music long before I had the opportunity to get to know him while at a charity golf tournament in Texas. He was so kind and such a gentle soul. When he sang it was like reliving all those amazing memories and feelings that mesmerized me all my life, along with the rest of the world, all over again. Being in his presence, I could see why many musicians who played on B.J.’s early sessions spoke of his enormous charisma… which they said could only be compared to Elvis. The indelible mark he made in the world of music is iconic, but getting to know B.J. as a real friend was the greatest gift of all. He will truly be loved, missed and remembered forever.” – Deborah Allen

“We were at The Grammy’s together in the early 80’s and he was And is “A Winner.” – David Frizzell

“B.J. Thomas was a staple in our house growing up and even today. His music is timeless and his influence on the music industry will live on forever. RIP B.J.!” – Shane Owens

“I still remember mom and dad listening to B.J. in the car when we were kids. Lots of memories of his songs growing up in rural Kentucky. Prayers to his family. A legend. Opry Member and a true country singer.” – JD Shelburne

“B.J. Thomas didn’t die today but he transitioned to a place where he will spend eternity with our Heavenly Father. I thank God that He allowed us to hear B.J.’s beautiful voice. This Troubadour captivated us not only with his beautiful smile but with his heart. Rest in Heaven, Rest In Peace my brother, because you are truly home where you belong.” – Carl Ray

“Being a kid listening to his music was refreshing. He had a TV sound with a smooth feel. His music was, is, and will remain timeless.” – Patrick Gibson