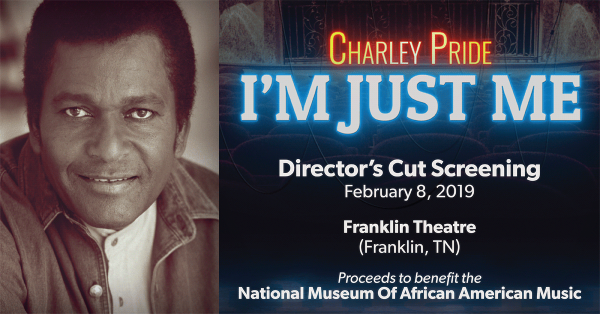 “There’s always been a handful of people with global appeal that goes beyond the face value of the culture of Country music.  Mr. Pride is absolutely one of those folks.”
– MARTY STUART

“Charley deserves every accolade he can get. And, uh, we’ll make up some new ones if we need to. He’ll deserve them too!”
– WILLIE NELSON

“He’s one of America’s great country stars.  He is Americana personified.”
– WHOOPI GOLDBERG

NASHVILLE, Tenn. – Residents of the Greater Nashville area will be among the first to have an opportunity to view an extended Director’s Cut of the all-new PBS documentary – before its’ network premiere on Feb. 22 – about the life and career of legendary Country music superstar, Charley Pride. American Masters – Charley Pride: I’m Just Me will make its first public showing on Friday, February 8 at 7 p.m. CT at Franklin Theatre. Immediately following the film will be a hosted Q&A with the film’s director, Barbara Hall, those featured in the film; Lloyd Green and Craig Havighurst, and Dr. Bennett from the National Museum of African American Music (NMAAM). Proceeds from the event will benefit the National Museum of African American Music. For more information, and to buy tickets, click here.

American Masters – Charley Pride: I’m Just Me traces the improbable journey of Charley Pride, from his humble beginnings as a sharecropper’s son on a cotton farm in segregated Sledge, Mississippi to his career as a Negro League baseball player and his meteoric rise as a trailblazing country music superstar. The new documentary reveals how Pride’s love for music led him from the Delta to a larger, grander world. In the 1940s, radio transcended racial barriers, making it possible for Pride to grow up listening to and emulating Grand Ole Opry stars like Ernest Tubb and Roy Acuff. The singer arrived in Nashville in 1963 while the city roiled with sit-ins and racial violence. But with boldness, perseverance and undeniable musical talent, he managed to parlay a series of fortuitous encounters with music industry insiders into a legacy of hit singles, a Recording Academy Lifetime Achievement Award and a place in the Country Music Hall of Fame.

“Helping shine a light Charley Pride’s story, struggles and incredible musical talent through this documentary represents the kinds of stories our museum wants to tell,” said H. Beecher Hicks III, CEO and president of NMAAM. “He’s truly a one-of-a-kind, trailblazing artist whose place in our nation’s and our culture’s musical history is undeniable.”

Buzzworthy Moments:
• Charley Pride and his wife Rozene speak candidly about Pride’s struggles with mental illness over the years. While on tour in Germany in 1968, the singer suffered a manic attack and was diagnosed with bipolar disorder.
• Charley Pride and fellow country music superstar Willie Nelson reminisce on camera about the early days of their careers.
• Charley Pride explains how he maneuvered his way through the white ranks of country music in order to gain acceptance in the industry.

Noteworthy Facts:
• Eighteen-year-old Charley Pride made his debut in the Negro American League as a pitcher-outfielder for the Memphis Red Sox in 1952.
• Charley Pride was drafted into the army in 1956 and served 14 months in Colorado. While in the military, he played on the baseball team and sang in the barracks.
• After Chet Atkins signed Pride to RCA, his third single, “Just Between You and Me,” reached the top 10 on the country music charts in 1967. The singer received his first Grammy nomination, for Best Country & Western Vocal Performance, Male, for the song.
• Charley Pride first appeared on the Grand Ole Opry radio show in 1967. When he was inducted as an Opry member in 1993, he became the first African-American Opry member since DeFord Bailey, who had been a regular member from 1927 until 1941. Pride celebrated the 25th anniversary of his induction into the Grand Ole Opry in 2018.
• Charley Pride won Entertainer of the Year and Male Vocalist of the Year at the Country Music Association (CMA) Awards in 1971.
• Charley Pride committed to an extensive tour of the U.K. in 1976, including several dates in Northern Ireland during the peak of the Troubles conflict. Because of the risks, international music acts were routinely avoiding Belfast. Pride’s November 1976 appearance at Belfast’s Ritz Cinema brought the community together and he became a hero to both sides of the conflict for helping to break the informal touring ban of Northern Ireland. This resulted in “Crystal Chandeliers” being considered a unity song.
• In 2000, Charley Pride was inducted into the Country Music Hall of Fame.
• The Recording Academy honored Charley Pride with a Lifetime Achievement Award during the GRAMMY Salute to Music Legends awards ceremony and tribute concert event in 2017.

Series Overview:
Launched in 1986 on PBS, American Masters has earned 28 Emmy Awards — including ten for Outstanding Non-Fiction Series and five for Outstanding Non-Fiction Special — 13 Peabodys, an Oscar, three Grammys, two Producers Guild Awards, and many other honors. To further explore the lives and works of masters past and present, American Masters offers streaming video of select films, outtakes, filmmaker interviews, the American Masters Podcast, educational resources and more. The series is a production of THIRTEEN PRODUCTIONS LLC for WNET and also seen on the WORLD channel.

About NMAAM:
The National Museum of African American Music, set to open in late 2019, will be the only museum dedicated solely to preserving African American music traditions and celebrating the influence African Americans have had on music. Based in Nashville, Tenn., the museum will share the story of the American soundtrack by integrating history and interactive technology to bring musical heroes of the past into the present. For more information, please visit www.nmaam.org.