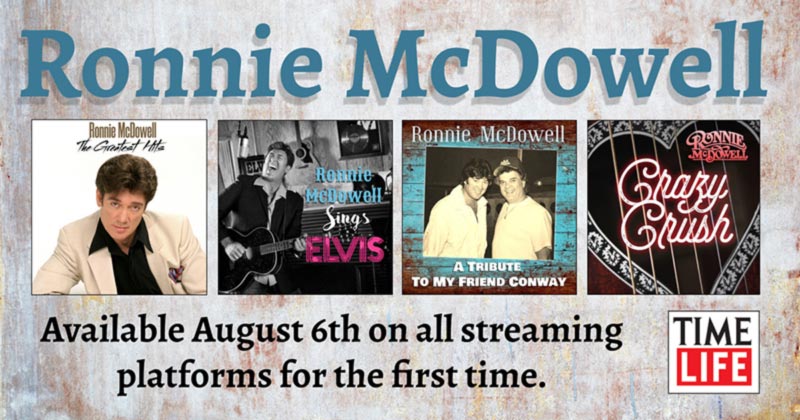 Nashville, Tenn. (August 6, 2021) – Country music star Ronnie McDowell will release four of his albums featuring more than 40 songs to all major streaming platforms today. This marks the first time that the albums have been available for fans to stream, particularly those who want to hear his iconic tribute, “The King Is Gone,” as well as his versions of beloved Elvis Presley songs right before this year’s Elvis Week celebration from August 11-17. His classic albums “Ronnie McDowell Sings Elvis,” “A Tribute to my Friend Conway” and “Crazy Crush” are now available, along with “The Greatest Hits,” a collection of newly recorded versions of McDowell’s most popular songs including his #1 hits “Older Women” and “You’re Gonna Ruin My Bad Reputation.”

“This is for my fans, the ones who have been there since these albums first came out on vinyl along with the ones who may have just heard my voice for the first time,” says McDowell. “I’ve always wanted to make sure my music was there for anyone who wanted to listen to it, and my friends at Time Life are going to make sure that if someone wants to hear me on their phone or computer or any other place they stream their music, they can.”

McDowell’s career spans more than 40 years and includes 30 Top 40 country hits and over 20 studio albums. His signature song, “The King Is Gone,” has sold over 5 million copies to date. Inspired by the passing of Elvis Presley in 1977, McDowell wrote and recorded the track which has become a favorite of Elvis fans around the world. McDowell later sang 36 songs on the soundtrack to the 1979 television movie “Elvis,” for the ABC series “Elvis” and Showtime’s “Elvis Meets Nixon.”

Suggested post:
Just in time for #ElvisWeek – four albums from @ronniemcdowell1 are available for streaming!

Ronnie McDowell Sings Elvis
https://smarturl.it/tra3cb
Just Pretend
Memories
That’s All Right
Love Me Tender
He’s Got You
(Such An) Easy Question
Angel
I Got Lucky
Love Letters
Please Don’t Stop Loving Me
All Tied Up

A Tribute to my Friend Conway
https://smarturl.it/7a0xov
Happy Birthday Darlin’
Crazy In Love
Don’t Take It Away
There’s A Honky Tonk Angel
Behind Blue Eyes
Love Me That Way
Hello Darlin’
I May Never Get To Heaven
I Don’t Know A Thing About Love
I’d Love To Lay You Down
Tight Fittin’ Jeans

Crazy Crush
https://smarturl.it/wugt8c
Nashville Nights
One Heavenly Christmas
I Wanna Wake Up With You
Crazy Crush
If You Ever Wanna Fool Around
Red, Yellow, Black And Red
Two Step Boggle
It Is What It Is
That Should Have Been Me
Without You
Soulmates
Time To Say Goodbye
Good Ol’ Days