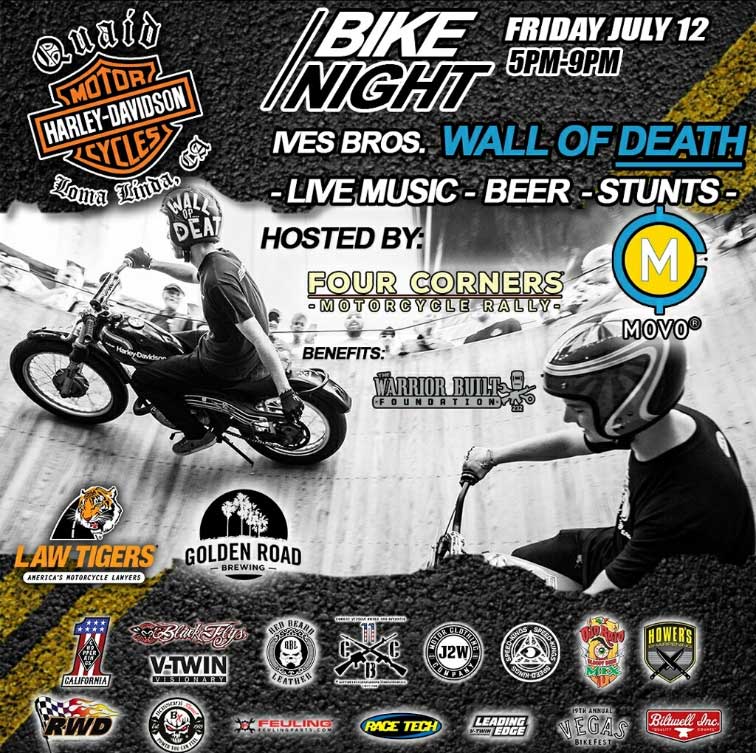 ”This Friday at Quaid Harley-Davidson we are showcasing a 2019 Harley-Davidson Fatbob customized by Speed Kings Cycle that we will giveaway September 1 during the 26th annual Four Corners Motorcycle Rally at the Sky Ute Casino Resort!” exclaimed John Oakes, Freeze Management CEO.

In addition, proceeds from the bike night will benefit The Warrior Built Foundation, a popular military charity based in Elsinore, California. The mission of “Warrior Built” seeks to honor the service and sacrifice of combat veterans and wounded service members who served our country by providing vocational and recreational opportunities. Vocational and recreational opportunities break through walls and foster an environment of healing, where great memories are born and new support systems are formed.

“Built” by combat veterans for combat veterans
“Built” on our core values of Honor, Courage, and Commitment
“Built” with the unrelenting drive to make a difference
“Built” remembering the Warrior Ethos we learned serving our country

“Ride out, enjoy the music and check out the amazing skill during the thrilling show from Kyle and Cody Ives,” said Brandon Quaid.

For more information, add the event on Facebook, call 909-796-8399, visit the store in person or show up early and stay late on Friday night! Please follow @FourCornersMotorcycleRally on Instagram.

About Quaid Harley Davidson:
Quaid Harley-Davidson® was established in 1996 by the four Quaid brothers – Bob, Rich, Glenn & Gordon. Their first store was located in San Bernardino on Baseline Street, opened in 1996. In March 1999, they moved to the current location in Loma Linda.