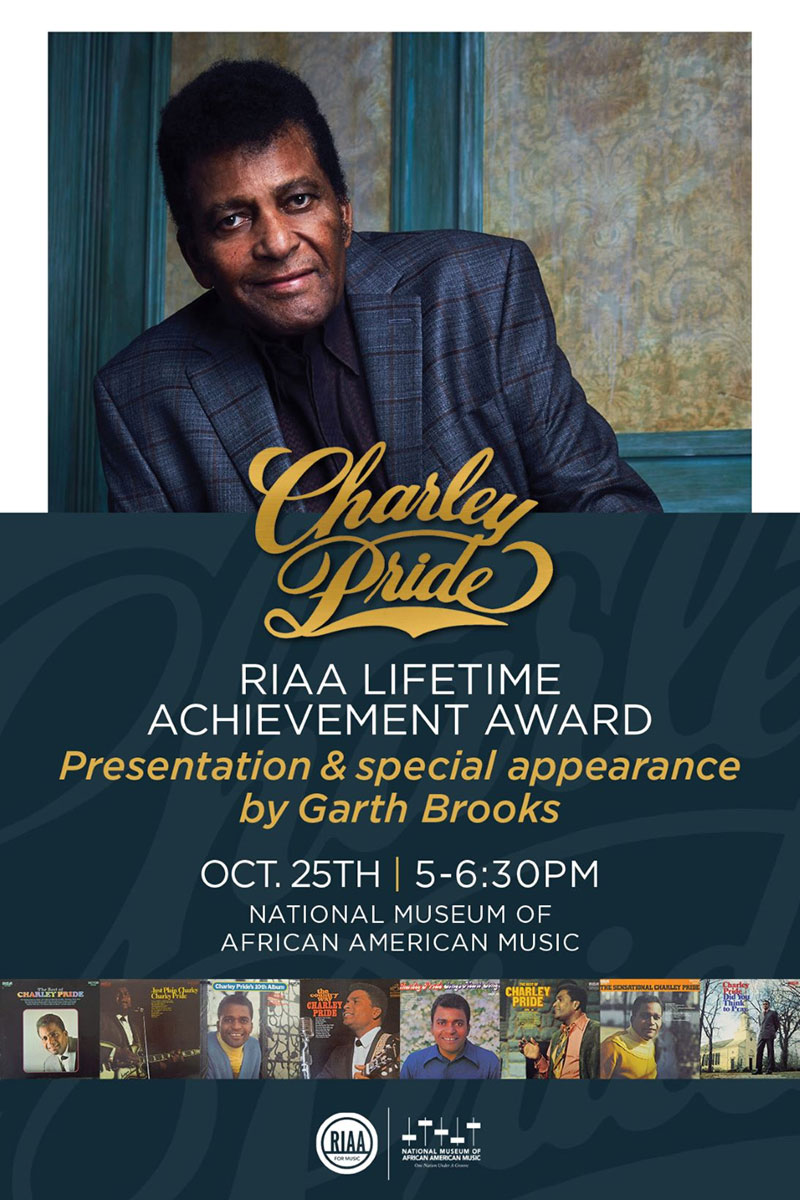 Brooks to Participate in Live Q&A with Songwriter, Author, and Vanderbilt Faculty Member Alice Randall with Special Performance by Brooks

Trailblazing Country music legend, Charley Pride, will be honored on October 25th at the National Museum of African American Music with the RIAA Lifetime Achievement Award presented by Garth Brooks. Charley’s son, Dion, will accept the honor from the RIAA on behalf of his late father. RIAA Chairman & CEO, Mitch Glazier, and COO Michele Ballantyne will be presenting a plague to not only Charlie’s family but one to the Museum for their walls, as well.

“Sometimes the greatest honor you can receive is being part of honoring someone else – this is an honor,” says Brooks.

Pride’s profound contributions to not only the sonic landscape of Country music but also the move towards wider inclusion and representation in the genre have helped set the stage for countless artists and his influence continues to be felt today. As part of the celebration of Charley Pride, his music and his courageous pursuit of a dream, Brooks will sit down with songwriter, author and Vanderbilt University faculty member, Alice Randall, for a live Q&A discussing Pride’s influence on him, country music in general and their recent collaboration. Brooks will perform acoustically the last song that Charlie recorded, the duet with Brooks “Where the Cross Don’t Burn,” penned by the late Troy Jones and the late Phil Thomas.

Pride and Brooks recorded “Where the Cross Don’t Burn” in September for Brooks’ Fun album, which came out in November. Brooks traveled to Pride’s studio in Dallas to record the duet, which chronicles the friendship between a young white boy and an older Black man during segregation.  The making of this duet was based on an internet rumor that Pride had passed away.  Brooks had held the song “Where The Cross Don’t Burn” for 10 years hoping to collaborate with Pride and when the rumor was stated as false, Brooks knew it was time and called up Pride’s management, and the ballad was quickly recorded.

About Alice Randall:
Alice Randall is on the Faculty of Vanderbilt University in the Department of African-American and Diaspora Studies. She has published extensively on Black artists working in country and her courses include “The Country Lyric in American Culture” and “Black Country.”  Randall was a consultant on all episodes of Ken Burns documentary Country Music and appears in two. She also appears in the PBS documentary on Charley Pride, I’m Just Me. She has co-written more than twenty recorded songs including “XXX’s and OOO’s” which celebrates “Aretha Franklin and Patsy Cline” and was recorded by Trisha Yearwood.

About RIAA:
The RIAA is the trade organization that supports and promotes the creative and commercial vitality of music labels in the United States, the most vibrant recorded music community in the world.  Our membership – which includes several hundred companies, ranging from small-to-medium-sized enterprises to global businesses – creates, manufactures and/or distributes sound recordings.  In support of its mission, the RIAA works to protect the intellectual property and First Amendment rights of artists and music labels; conducts consumer, industry, and technical research; and monitors and reviews state and federal laws, regulations, and policies.

About Garth Brooks:
In May 2021, Garth Brooks received one of the most prestigious honors an artist can receive, The Kennedy Center Honor. He remains the #1-selling solo artist in U.S. history, certified by the RIAA with 157 million album sales. Brooks is the first and only artist in history to receive nine RIAA Diamond Awards for the now nine albums certified at over 10 million. Brooks is the first-ever seven-time recipient of the CMA Entertainer of the Year award. Recently, he was awarded Country Touring Artist of the Decade at the 2021 Pollstar Awards. In March 2020, Brooks received the esteemed Library of Congress Gershwin Prize for Popular Song. He has received nearly every accolade the recording industry can bestow on an artist and is a member of the Country Music Hall of Fame, the Songwriters Hall of Fame, the Nashville Songwriters Hall of Fame, the Musicians Hall of Fame, and the Grand Ole Opry.

In March 2019 Brooks rolled out The Garth Brooks Stadium Tour, which has set new stadium attendance records at every venue so far. For example, Brooks set a record for ANY entertainment event at The Dome at America’s Center in St. Louis and hosted the largest concert crowd in the history of Detroit’s Ford Field. At State Farm Stadium in Glendale, Arizona, he set an attendance record not only for the stadium, but the entire state of Arizona, while at U.S. Bank Stadium in Minneapolis, he set an all-time concert attendance record. Pollstar deemed Brooks’ stadium tour the best-selling country music tour of 2019.

In January 2020, Billboard announced that Garth Brooks was the first artist to make it on the Billboard Hot Country Songs chart in the 80s, 90s, 00s, 10s. With “Dive Bar,” a duet he sang with Blake Shelton, he made his appearance on the list in 2020. The single inspired a DIVE BAR tour to dive bars in country music capitals around the country which will continue its run of stops through 2022.

Garth also has Inside Studio G, a weekly Facebook Live series. It airs every Monday on Garth’s Facebook page at 7:00 p.m. eastern.