GRAMMY®-WINNING QUARTET THE OAK RIDGE BOYS TO APPEAR ON THE BIG INTERVIEW, PREMIERING TUESDAY, MAY 1 AT 9 p.m. ET/6 p.m. PT ON AXS TV 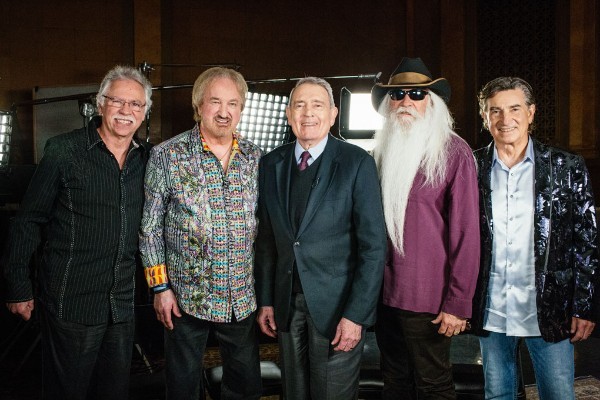 Los Angeles, CA – GRAMMY® winning, Country Music Hall of Fame and Grand Ole Opry members The Oak Ridge Boys join Dan Rather for a lively evening, opening up about their controversial crossover from Gospel to Country and the incredible impact fellow icon Johnny Cash had on their career in this exclusive look at an all-new episode of The Big Interview—airing Tuesday, May 1 at 9 p.m. ET/6 p.m. PT.

During the conversation, the band discusses their early days as an up-and-coming act living in close proximity to genre power couple June and Johnny Cash, with whom they struck up a long-lasting friendship—one that would change the trajectory of their path to super-stardom. As tenor Joseph Bonsall recalls, “Johnny took us out with him, paid us more than we were worth, even gave us bonuses. I mean, they knew we were hurtin’… we didn’t go to bed as a Gospel quartet and wake up as a bunch of Country music hit makers here. There were these gray years in here where it was really hard for us.”

With the band struggling to break through in the competitive scene, Cash gathered the boys together to impart some invaluable wisdom that would stick with them forever. Bonsall continues, “He gathered us up in a circle and he gave us a pep talk. He said, ‘Boys, there’s magic here. I feel it, being here and among you and listening to you sing. It’s magical. People don’t really know it yet. But I’m just sayin’ don’t give up.’ Don’t give up, in that big voice of his. I mean it was like God talkin’ to us. It’s the kind of stuff you can’t even make up.”

Though the group was a titan of the Gospel genre, collecting a plethora of honors and routinely ranking at the top of the charts, they were hungry to bring their soulful songs to an even wider audience. This decision was met with some resistance from the industry, but it played a massive role in setting the stage for the band to become the influential powerhouse that they are today. Bass crooner Richard Sterban explains, “We felt as though we had to branch out and do some other things. In 1977, we had our first hit song, ‘Y’all Come Back Saloon’, and from that point on for the next 15 years, just about everything we released went to the top of the Country music charts and we became a major act in Country music… it was a very exciting period in our time and it was a great thing to be a part of. There’s no question about that.”

Check it out here: bcove.video/2Jm9Nvm

About AXS TV:
Launched in July 2012 by visionary entrepreneur CEO Mark Cuban, AXS TV delivers the ultimate in music entertainment programming with an eclectic lineup that includes classic concerts from music’s most iconic bands, as well as exclusive music festival coverage, original hit series, docs that rock, insightful specials, and knock-out live mixed martial arts action. AXS TV is a partnership between Cuban, AEG, Ryan Seacrest Media, Creative Artists Agency (CAA) and CBS. The network is available nationally in the United States and can be seen in parts of Canada, Mexico and the Caribbean. For a list of providers, visit axs.tv/subscribe. For more information, see www.axs.tv and www.axs.tv/press. Follow AXS TV on Facebook,Twitter @axstv; Instagram; and YouTube. Press information is available at axstvmediacenter.com.

# # #
Suggested Tweet:
The @OakRidgeBoys to appear on #TheBigInterview with @DanRather, premiering Tuesday, May 1 at 9 p.m. ET/6 p.m. PT on @AXSTV