GRAMMY®-WINNING SONGSTRESS CRYSTAL GAYLE OPENS UP ABOUT HER CAREER IN AN ALL-NEW EPISODE OF AXS-TV’S “THE BIG INTERVIEW” ON TUESDAY, MARCH 7, AT 8 P.M. ET/5 P.M. PT 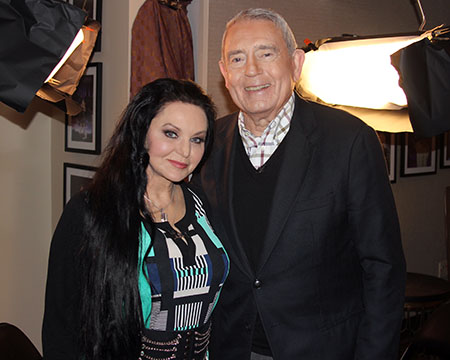 NASHVILLE, Tenn. (March 3, 2017) – GRAMMY®-winning songstress Crystal Gayle sits down with Dan Rather in next week’s all-new episode of AXS TV’s “THE BIG INTERVIEW,” airing Tuesday, March 7, at 8 p.m. ET. During the candid discussion, Gayle opens up about her celebrated career, her most enduring songs, and her relationship with sister—and fellow superstar—Loretta Lynn, among other topics.

One of the most defining attributes of Gayle’s remarkable style is her unique ability to really connect with the songs she sings and she and Rather spend time discussing this topic. Revealing how she’s been able to develop this skill, Gayle says, “You have to be able to put the words across, the lyrics. You have to have a little bit of acting. It’s really in tone, too… You just go in there and you sing, and you put your heart and soul into it, and hope someone likes it.”

While Gayle and her older sister, Loretta Lynn, have both enjoyed tremendous success in country music, she explains that there really wasn’t any sibling rivalry going on—despite some of the media’s reports. Gayle says, “We were so busy, both of us, in our careers, that we really didn’t have time to bicker…We really didn’t have problems. Of course, we’re sisters, we can bicker. In the studio, you should hear us when we’re trying to learn a song. But, no, we really did not have the problem. I look up to my sister. We both have flaws in different ways, but… we love each other. We overlook, and that’s why I think our family is so great.”

For a preview of “THE BIG INTERVIEW” featuring Crystal Gayle, click here.

ABOUT CRYSTAL GAYLE:
Crystal Gayle is an award-winning country music icon whose reign in the music business includes 20 No. 1 country hits, six albums certified Gold by the RIAA and the first female artist in country music history to reach platinum sales with her 1977 album, We Must Believe in Magic. Her 1977 country-pop crossover hit song, “Don’t It Make My Brown Eyes Blue,” became an iconic staple and solidified her as one of the top female vocalists during the 1970s and 1980s. Her list of platinum and gold was to be matched only by her awards and accolades. CMA’s “Female Vocalist of the Year,” for two consecutive years, she became a Grammy® Award Winner for “Best Female Vocal Performance,” thanks to her beloved “Brown Eyes” – a song that she today admits she has never grown tired of singing. Crystal swept the Academy of Country Music Awards for three of their “Top Female Vocalist” statuettes. She is the recipient of three “American Music Awards,” voted by the nation as America’s “Favorite Female Artist.” Perhaps nothing sums up Crystal’s career achievements as well as being awarded with a star on the fabled Hollywood Walk of Fame in October 2009. Also famous for her nearly floor-length hair, she was voted one of the 50 most beautiful people in the world by People Magazine in 1983. Gayle also has a star on the Hollywood Walk of Fame near Lynn’s star. In August 2016, the Academy of Country Music honored Crystal with the Cliffie Stone Pioneer Award during the 10th Annual ACM Honors.™ Gayle was inducted into the Grand Ole Opry® in January 2017 by her sister and Opry legend Loretta Lynn. For more information, visit crystalgayle.com.