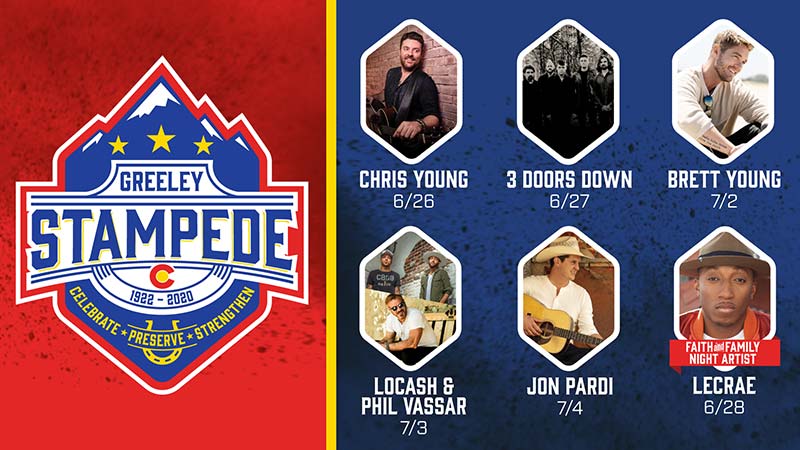 Greeley, Colo. – With the announcement of 3 Doors Down on Tuesday, the Greeley Stampede lineup is now set for 2020. The chart topping powerhouse rock band will headline the SuperStars Concert Series at the Greeley Independence Stadium in Greeley, Colorado Saturday, June 27th.

About The Greeley Stampede:
The Greeley Stampede is a nonprofit venue that holds premiere western celebrations including live concerts and rodeo entertainment to hundreds of thousands of people each summer. Come join us for a good atmosphere and an even better lineup! Opening acts for the arena concerts and headliners for the park stage will be announced at a later date. Tickets are also available for the PRCA Pro Rodeo Series, Demolition Derby, PRCA Xtreme Bulls, and American Bull Fighting. Tickets can be purchased at 970-356-7787, greeleystampede.org or from TicketsWest at 866-464-2626 or ticketswest.com. Tickets purchased through third parties or ticket brokers may not be valid.

About Romeo Entertainment Group:
Romeo Entertainment Group (“REG”) is an award-winning full service talent buying agency. Family owned and operated for 65 years, REG continues to be one of the preeminent talent buyers and concert producers in the United States. REG assists with all aspects needed to produce successful concerts, from talent acquisition, negotiation, contract review and processing, marketing, promotions, and production consultation. With over 120 annual multi-day events in 36 states taking place in over 80 different cities throughout the United States and Canada, REG represents one of the largest buying networks of live entertainment from the Midwest through the Northwest regions. In 2019 alone REG produced nearly 500 concerts at over 120 unique venues throughout the United States and Canada featuring 335 unique big name entertainers from various genres including country, rock, pop, hip-hop, blues, christian, and comedy.

REG’s award winning talent buyers have received multiple Academy of Country Music, Country Music Association, and International Entertainment Buyers Association awards. These honors include the prestigious IEBA Industry Achievement Award bestowed upon REG in 2014. The honor went to REG for “it’s decades of success as one of the largest independent talent buying agencies and entertainment producers in the entertainment industry.” Pam Matthews, Executive Director of IEBA, was quoted in the Press Release as saying, “everyone in the business knows a Romeo date is always a great date because excellent client service with a personal touch is in the family DNA.” Most recently R.J. Romeo received the “Don Romeo” ACM Talent Buyer of the Year Award for 2018 and the 2018 IEBA Fair Buyer of the Year Award.