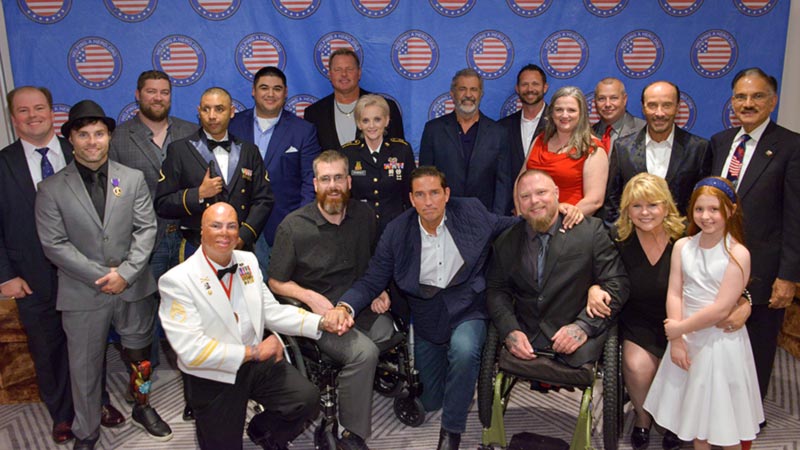 DALLAS, Texas – September 11th may have come and gone, but patriotism was flowing at the Thompson Hotel in Dallas, Texas Monday night as the Helping a Hero Banquet honored many notable names who have supported our military, first responders, and our veterans!

“The recipients that we chose to honor with the Lee Greenwood Patriot Award are all outstanding in their own way, in which, they support our military and veterans,” says Greenwood. “From baseball to football, both known as America’s sports, to the man who played Jesus Christ in The Passion of the Christ, I think we have a really great diverse group all with one thing in common…supporting our military and veterans!”

The Lee Greenwood Patriot Award was presented to five deserving recipients, including baseball great Roger Clemens, who has played for the Boston Red Sox, Toronto Blue Jays, New York Yankees, and Houston Astros; Tavia and Clark Hunt, Chairman and CEO of the Kansas City Chiefs; Jim Caviezel, who played the role of Jesus Christ in the movie The Passion of the Christ among many other roles; The Honorable Mica Mosbacher, who is known in the Texas region for her philanthropical work and community involvement; and in a surprise moment, recipients of Helping a Hero homes honored Meredith Iler, Chairman Emeritus of Helping a Hero, for her decade long contribution and passion for serving and honoring veterans from coast to coast.

On hand was the Honorable Rick Perry, who served both in the Trump Cabinet and as Governor of Texas, and was honored with the Lifetime Achievement Award for his dedicated service to supporting the armed forces and honoring veterans.

About Helping A Hero:
Texas-based Helping a Hero is a 501(c)(3) non-profit, non-partisan organization providing support for military personnel severely injured in the war on terror. Our principal activity is to provide specially adapted homes for qualifying service members as well as engaging the community to provide services and resources for our wounded heroes and their families. Helping a Hero is one of the largest home-building organizations in the nation for wounded veterans. Our home recipients include veterans from 23 states whose permanent injuries have left them paraplegics, quadriplegics, amputees, with a severe TBI, blind, and with severe burns.

Helping a Hero partners with the homebuilder, the community, and the veteran on each home. Our home recipients are responsible for three things: 1) a $50,000 mortgage, 2) to live in the home as his/her primary residence for a minimum of 10 years, and 3) Use of the VA Specially Adapted Housing grant if eligible.

Helping A Hero is accepting applications from eligible wounded warriors needing a specially adapted home. We also invite the public to Nominate a Hero by completing the nomination form. Both the application and the Nominate a Hero form are available on our website at www.helpingahero.org.