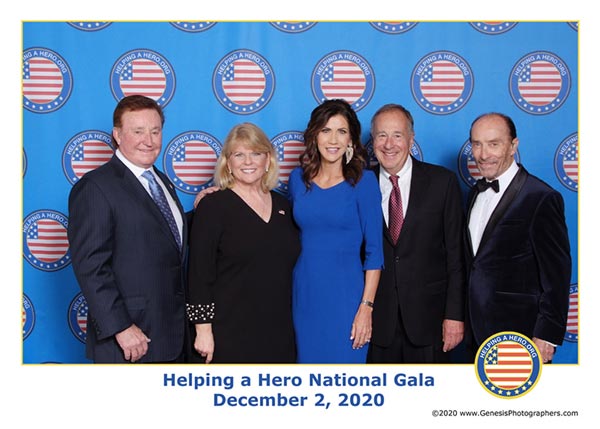 Former TV news reporter Cynthia Hunt Mixon served as emcee for the event; former NFL team captain Jack Brewer blessed the evening with a message of hope and restoration; and music legend Lee Greenwood ended the evening with a medley of Christmas songs and an inspiring performance of “God Bless the USA,” which captured the spirit of the honorees, veterans, and attendees.

A dry eye could not be found in the ballroom when recently widowed Tawnee Gonzalez accepted the first Lee Greenwood Patriot Award of the evening on behalf of her decorated husband, Retired Marine Sergeant Marty Gonzalez who passed away on November 28, 2020, from a grenade blast that hit him during Operation Phantom Fury in Fallujah, Iraq on December 12, 2004. Sgt. Gonzalez received three Purple Hearts and two Bronze Stars during three firefights in 33 days. In 2012, Sgt. Gonzalez married the love of his life and several months later moved into his Helping a Hero specially adapted home. The Gonzalez family expressed their appreciation and gratefulness for the years of freedom he experienced in the home and the memories and love that abound within its walls.

“Sgt. Marty Gonzalez’s death came as a shock to all in our Helping a Hero family. The sacrifices our heroes make on the battlefield and once they are home can never be repaid,” said Helping a Hero’s Chairman Emeritus Meredith Iler. “Helping a Hero is stepping forward to navigate around the COVID-19 pandemic to support our nation’s heroes and their families in emergencies like Marty’s death and to continue to build adapted homes for our wounded warriors to support them on their road to recovery.”

“I am so honored by the sacrifices our U.S. Military veterans have made for America,” said Richard Childress, chairman and CEO of Richard Childress Racing. “They are true heroes so sincere thanks go to Lee Greenwood and everyone at Helping A Hero for their work assisting severely wounded warriors returning from war.”

“Our Nation is indebted to patriot Lee Greenwood for his work with ‘Helping a Hero,’ which has made a meaningful difference in the lives of so many of our veterans and their families,” said Goya Foods CEO Bob Unanue. “The dedication and sacrifices of these American heroes in protecting our country and the freedoms we enjoy are truly remarkable and we are eternally grateful.”

“It was a true privilege to receive the Lee Greenwood Patriot Award,” said South Dakota Governor Kristi Noem. “But the real highlight of my night was meeting the men and women who put their lives on the line in service to our nation. These folks now face a lifetime of challenges due to the injuries they sustained in combat. I was so blessed to be able to help honor and support them.”

“The oaths of office that our military men and women take are almost identical to the oaths for Members of Congress with one significant exception, our military personnel pledge everything – their lives, their limbs, and their futures to defend our Constitution,” said U.S. Congressman Bill Flores (TX-17). “Therefore, I have always endeavored to ‘Have their backs’ while serving them in Congress, because they truly ‘have the Nation’s backs’ while they serve.”

“We owe a deep debt of gratitude to those that fight for and defend our freedoms,” said multi-platinum recording artist Michael W. Smith. “That’s why I support Helping a Hero and the tremendous work that they do on a daily basis. Helping a Hero and those that support this great cause are making a huge impact on the many lives of our warriors who deserve all the help we can possibly give them. I applaud the work you are doing and I am honored to receive The Lee Greenwood Patriot Award.”

“We extend our deepest thanks and appreciation to Lee Greenwood, our sponsors, supporters, honorees, board members, advisory board members, and staff for making the event a huge success,” said Helping a Hero Chairman of the Board of Directors Hector Villareal. “I am honored to serve those that have served and sacrificed protecting our freedom. God bless the USA.”

Helping a Hero builds specially adapted homes with wider doors and hallways, an adapted shower and bathroom, flush entryways, and other safety features tailored to the injuries of each warrior. Other support programs include the emergency needs program, family retreats, recreation activities, and Operation Merry Christmas.

About the Lee Greenwood Patriot Award:
For the past decade, Lee Greenwood has partnered with Helping a Hero to empower our wounded warriors by providing specially adapted homes tailored to their injuries. Over the years we have presented the Lee Greenwood Award to legends including Chuck and Gena Norris, Randy Travis, The Oak Ridge Boys, Kathie Lee Gifford, Roger Clemens, and Congressman Dan Crenshaw. We have presented the Patriot Award to many great Americans including former President George W. Bush, Ambassador Nikki Haley, Dr. Robert Gates, General Tommy Franks, the late Herman Cain, and former First Lady Laura Bush. This year we have combined the two awards and Lee presented “The Lee Greenwood Patriot Award” at our Gala to five leaders who have demonstrated outstanding patriotism and support for our military and veterans. As Greenwood kicks off the 40th Anniversary of “God Bless the USA,” he will award a total of 40 Lee Greenwood Patriot Awards at events in Charlotte, N.C., West Palm Beach Fla., Omaha, Neb., and Washington, D.C.

About Helping a Hero:
Helping a Hero is a 501(c)(3) organization based in Texas that has awarded over 100 homes in 23 states to our most severely wounded warriors injured in the Global War on Terror. Helping a Hero is certified by the Better Business Bureau as a transparent and accountable charity and was also one of 12 charities selected by the BBB for the “Award of Distinction” in 2017. Applications are being accepted for 2021 homes.