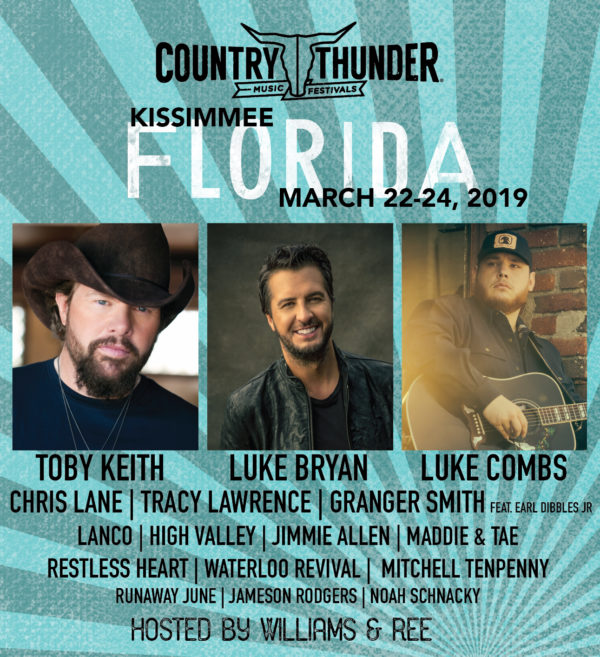 KISSIMMEE, Fla. – Since announcing that Country Thunder will be rolling into fabulous Osceola Heritage Park in Kissimmee, Florida, next March, anticipation has reached a fevered pitch in the Sunshine State.

Today, organizers announced the next wave of main stage artists with a promise of even more to come.

“CT Nation has come to expect the biggest and best when it comes to our headline artists,” says Country Thunder Music Festivals CEO Troy Vollhoffer. “We’re incredibly proud to have Luke Bryan, Toby Keith and Luke Combs in Florida, but we also know that it’s a balance of headliners, combined with red-hot up-and-comers and heritage acts who have stood the test of time which creates the total festival experience.”

“It wasn’t that long ago when Luke Bryan was an early afternoon act at numerous Country Thunder events – you just never know when you’re going to discover your new favorite artist or the next big thing.”

Newly announced artists to perform on the main stage include High Valley, who is poised for great things after scoring their first U.S. top-10 last year with “She’s With Me,” along with Mitchell Tenpenny, Runaway June, Waterloo Revival, Jimmie Allen, Jameson Rodgers and Noah Schnacky.

In addition to three days of the biggest and best acts that country music has to offer, the RAM National Circuit Finals Rodeo will also be taking place during the festival over at the Silver Spurs Arena.

Three-day GA passes (including a new standing room area which allows fans to get up close and personal with their favorite CT stars), reserved seating, Platinum Experience, camping, glamping and all the extras are available by visiting countrythunder.com. Order by phone at 1-866-388-0007. Facebook, Twitter and Instagram all @countrythunder.

The Country Thunder Music Festivals organization has a 15-year history which boasts four other major multi-day events in North America, including the reigning ACM Festival Of The Year in Arizona. The organization also hosts events in Wisconsin, Alberta and Saskatchewan.